The Day The Cons Officially Became The Bigot Party 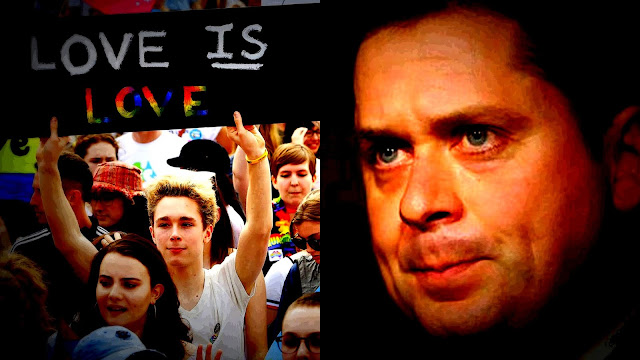 When Erin O'Toole set out to try to convince Canadians into believing that his Cons were now a more "moderate" party, he knew that he first had to make them believe that he was not as anti-gay as Andrew Scheer.

The creepy religious fanatic whose hatred for LGBT Canadians was so great he once compared them to dogs.

So O'Toole, and his team of foreign advisors, began by trying to fool them into believing that him and his Cons were gay friendly, with ads like this one.

It's Pride month. Now's a time to celebrate everyone in the LGBTQ2 community & remember the history that got us here. We've come a long way, but there's still work to do. You have my commitment to be there with you, standing up against homophobia, transphobia, and biphobia. 🏳️‍🌈🏳️‍⚧️ pic.twitter.com/jg0dqbEXyf

But sadly for O'Toole the campaign was not only fraudulent and cringeworthy, it came to a crashing end when 62 members of his caucus voted against a ban on conversion therapy. 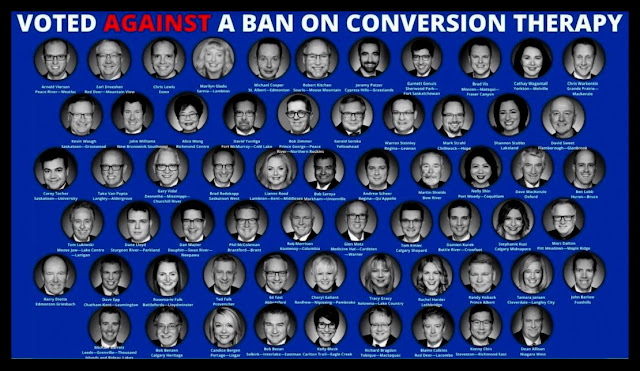 More than HALF of O'Toole's caucus voted not to ban conversion therapy, even though it's nothing less than the torture of gay kids, and DOUBLES the chance that they will commit suicide.

And this at a time when Statistics Canada is reporting that hate crimes against gay people are rising all over the country.

With people being assaulted.

And pride flags being stolen and burned.

I am LIVID right now. This just happened at my house. Someone came and tore down our Pride flag. No one touched it for a year when it was a Canada flag but now that it’s for pride this happens. THIS IS WHY WE NEED PRIDE MONTH. Police have been called but please share #yeg #LGBTQ pic.twitter.com/mBuiLc8hd1

You know, I'll ever understand the monstrous evil of homophobia even though I've been fighting it from the age of fourteen.

Nor will I ever understand why the very sight of the beautiful rainbow flag drives some people crazy.

Like this disgusting old bigot in Saskatoon making a spectacle out of himself.

Homophobic cowboy in Canada loses his shit over a Pride crosswalk pic.twitter.com/dhK7N6hOg6

But the good news is that the Cons will from now on be known as the Bigot Party. 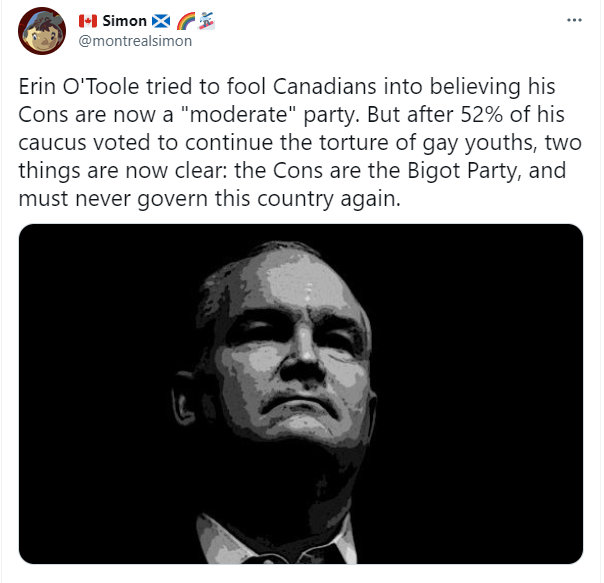 Their bigotry will cost them big time, by ruining O'Toole's plans to fool Canadians into believing that the Cons are now a "moderate" party.

And for that we have to thank all those young LGBT people and their friends and allies.

Who were attacked by the Con's monstrous legion of religious fanatics. But ended up winning by exposing the Bigot Party.

And in this Pride Month are still marching on to victory... 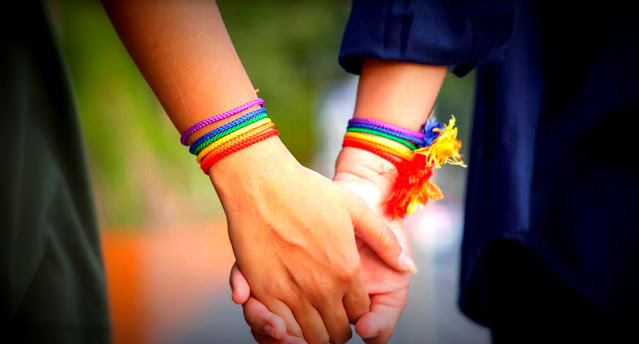 
Fuck O'Toole and fuck Bettman. How 'bout them Habs, eh???? You know, if 1993 were to repeat itself, the Habs would win a Cup, the Cons would self-destruct, and the Liberals would win a majority. Cross your fingers, pirouette three times and spit in the air, it might come true?

Funny too how silent he is about the child murders committed by catholic clergy. He has supported them socially, politically and financially and is silent about the Church's evil ways. He was also there , close to power, when the crimes were being committed.

Hi Jackie….
This edition of the Habs is taking me back to the days when I was in High school and never missed a game if I could possibly help it. But I don’t like to talk about them in case I jinx them
I live a few blocks away from the Scotia arena where the Leafs play, but I have never been to a Leaf game. However On Sunday I will be going there to get my second vaccine jab, so that will almost be as good as winning the Stanley Cup. 😉

Hi rumleyfips….yes, it’s disgraceful that such a toxic Trudeau hater writes for Progressive Bloggers. And he’s not the only one. I still publish my posts there but it’s not the same thing. Progressive Bloggers needs to do some Spring cleaning, but I don’t want to criticize the adminstrators because they have performed such a valuable service for progressives for so long. When I first started blogging the Blogging Tories ruled the roost, but they became extinct and hopefully the ReformCons will also fade to black…