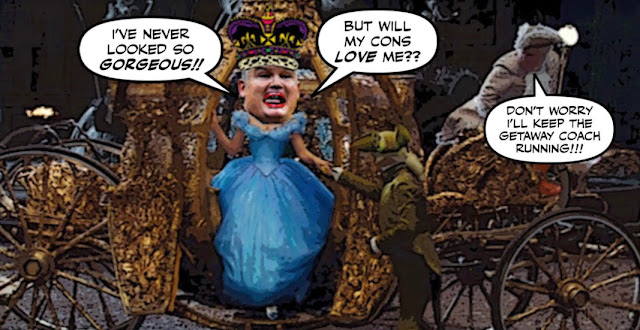 It was supposed to be Erin O'Toole's big night. His Cinderella moment when he would step out of his shiny outhouse coach.

And announce that his Cons had to become new/nouveau if they were going to overthrow  the evil Justin Trudeau.

But sadly for him, as in the old fairy tale, the ball ended badly. 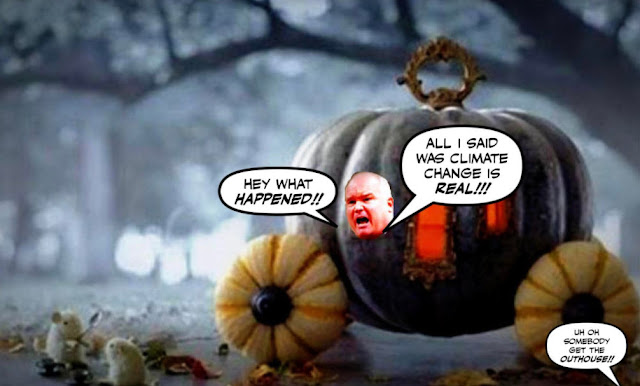 The coach turned into a pumpkin, O'Toole reverted to being Captain Outhouse.

His much hyped speech was all tell and no show.

O’Tool adroitly diagnosed some of the major problems facing him and his party at the moment, their potential solutions and what a weary, stressed and frightened country may be hungry to hear from an alternative to the governing party. So there’s the tell; it’s just a shame the rest of his remarks didn’t show how he would follow through on that.

And none of his words were more hollow than what he had to say about climate change.

On climate change, O’Toole first chuckled at people who had speculated that he might have something dramatic to say, warning, “I’m afraid you’ll be disappointed.” Then he drew two lines in the sand that had the effect of confusing anyone trying to figure out where he stands and what he wants to do.  First, he declared stoutly, “We cannot ignore the reality of climate change. The debate is over.” But then he said, “As important as climate change is, getting our economy back on track is more important,” adding, “Canadian voters should have no doubt” that his first priority is jobs and rebuilding the ravaged economy.

Even the toxic Trudeau hater Andrew Coyne could see it was just more of the same...

And of course, for Outhouse this was an absolute disaster.

Efforts to get official Conservative policy to firmly state the party believes climate change is real have failed.

The results of Saturday's vote defeating a motion that would have enshrined the idea in the party's official policy declaration will be an awkward blow to Conservative Leader Erin O'Toole, who told the party's grassroots in a Friday evening speech that an ambitious climate change agenda is a must if the party hopes to win power.

A disaster that made it only too clear that the Cons are and always will be a party of climate change deniers, and religious fanatics.

Ahead of the convention, the anti-abortion group Campaign Life Coalition had circulated a "voters guide" to the resolutions and had urged its membership to vote down the one on the environment, saying "global warning alarmism" was being used to justify population control and abortion.

And is yet another example why O'Toole and his grubby gang must NEVER be allowed to govern this country again.

Fortunately, according to this latest poll, most Canadians seem to agree... 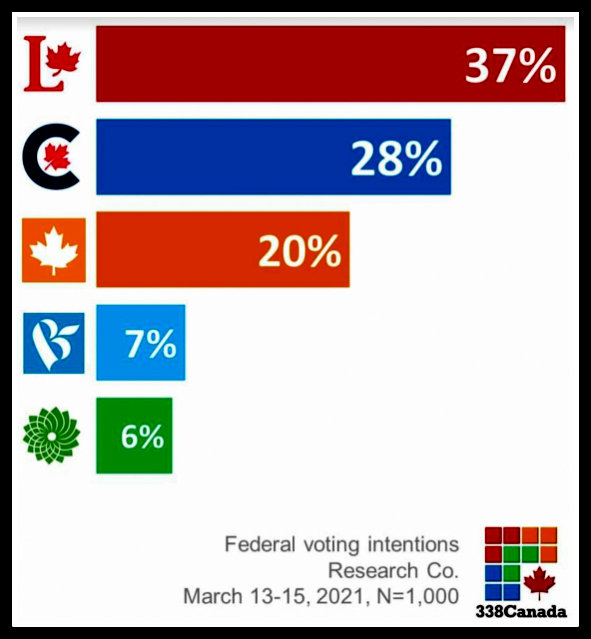 Because that's got MAJORITY written all over it.

You know, the National Post Con sympathizer Matt Gurney had this to say about yesterday's Con convention:

And he may be right.

But this is true too:

We are lucky to have a decent prime minister like Justin Trudeau to defeat O'Toole's ugly Cons.

And help save this country and the world... 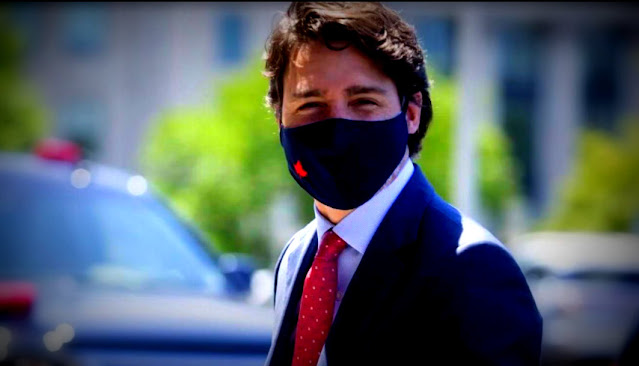 To make matters even worse, the climate change policy was kiboshed by Campaign Life, on grounds that environmentalism is "population control" or some such QNonsense about gay frogs and precious bodily fluids. At the next convention they'll seek to repeal the law of gravity. This was already a joke about Rick Perry in 2011, so it's good to know that "securing the future" (hint hint) means traveling way back to the past.

It's also worth nothing that they adopted a resolution that effectively rendered the few remaining "sensible" Tories in Atlantic Canada and Quebec -- who voted for the climate resolution -- neutered to practically the point of nonexistence. Looks like the backstabber from Central Nova can Judas-kiss any hope whatsoever of reviving his pathetic career, goodbye. I figured as much, the navigator crashed the chopper. Truly a Royal Canadian Air Farce.

Now they'll just double down on courting wingnuts out West, and not even bother paying lip service to appearing "progressive." The next joker who ends up driving this clown car is going to make Amerikaner Andy or even Max look like Tommy Douglas. It'll probably be Cmdr. Waterford Sloan who ends up racking up enough sympathy votes from the friendly sausage handlers and QMorons in the delegation, since they feel such pity for the Nazi-adjacent POS getting unceremoniously ejected on flimsy pretexts by Two-Face Dumbfuck O'Toole.

I hope they fragment into the sum of their parts and Justin Trudeau can be prime minister for as long as dear ol' dad. Perhaps even longer. Actually, I eagerly look forward to the Cons being in the wilderness until Hadrien Jr. becomes PM.

Waded through the Con resolution list.The key themes are building more pipelines and trouncing individual rights in exchange for state sponsorship of good old biblical morality.
The argument that pipelines will bring energy independence and prosperity for all in their path is pure fiction. We are already pumping more tarry oil than Canada can consume, whats missing is the multi billion dollars required to upgrade refining capacity in order to utilize it. The evangelical sponsored state attack on basic freedoms is couched in lots of caring words but essentially aims to neuter the courts that occasionally side with individuals instead of state sponsored legislation. Also,to make it far easier for the missionaries to drive non conformers into submission or exile. Its interesting the Cons are keen to declare a morality war on China but in the end both support state sponsored domination of basic human freedoms such as reproduction, end of life and who you love while you are here.
The Tool may try and put lipstick on the pig but after a year of Covid most people have a need for some inclusiveness and compassion. We only have to look at how the local Cons handled senior care homes to know they have none. Although it was a challenging situation and some mistakes are perhaps forgivable; when compared to other afflicted groups they were isolated like lepers, barred from loved ones who could have helped and no cavalry arrived in time to save the day when the front lines fell. State sponsored compassionate sacrifice for the common good.

My congratulations to the tool for what can only be described as a complete success of a policy convention, if you're a Liberal. The headlines say it all, grassroots reject climate change, 54% of members tell the tool that much like real grassroots, their heads are in the sand and cannot recognize climate change as an existential threat. A poll from 2019 has 82% of Canadians worried about climate change.
https://www.straight.com/news/1284456/poll-shows-whopping-concern-among-canadians-about-climate-change-82-percent-say-its
Those are scary numbers for the tool. How can you rally "the team" when the majority of them are still denying the undeniable. They are on a level of delusion and stupidity usually reserved for Trump supporters and I couldn't be happier than to see the tool having to deal with them. That should have him pulling out his few remaining hairs as he "navigates" through his flock of Cuckoos as his polling sinks like a stone. Well done Erin, now let's get to work.
JD

and she is buying a pipeline to heavan

After watching the errant old fool's infomercial, I went out and bought 4 Shamwows.

Even the usual Conservative Party apologists in the media have been unable to spin the Party's views on climate change in any positive fashion. They know the Conservative Party tripped over its how shoe laces and face planted into a pile of horse shit.

The only saving grace for the Conservatives will be that no one in the media will dwell on it. They will move on to Justin Trudeau's socks or some other BS issue soon enough. Of course, if it would have been the Liberals who had stumbled so badly they would still be talking about it in August.

Oh well, it will still be fun to watch Erin O'Toole come up with a climate plan that does not offend his own Party and attracts new voters to the Conservatives.

Hi Jackie....I read the Campaign Life and Right Now statements celebrating their "victory" at the Con convention. And you're right, it might as well have come out of the annals or anuses of the Q-Anon crazies. In any other country it would be enough to totally discredit a leader and his nutty party. But in Canada our foul Con media is trying to bury the story so we can take nothing for granted. I'm up for the challenge and I know you are...

Its interesting the Cons are keen to declare a morality war on China but in the end both support state sponsored domination of basic human freedoms such as reproduction, end of life and who you love while you are here.

The hypocrisy of those SoCons is nauseating. But as I told Jackie, the Con media is trying to bury the problem, and with a possible election on the horizon that could be fatal for this country. Climate change denial is bad enough, but when it has a religious component it couldn't be more scary...

Hi JD...Like you I feel that the Con climate convention should have damaged the Cons beyond recognition, for the pandemic may be overshadowing everything right now, but climate change is still our greatest existential threat. But what I am afraid of is that the Con media is trying to make Canadians believe that O'Toole is a Great Reformer, and just needs the support of decent Canadians to turn the Cons into a moderate party. For example, in his hollow speech he claimed that just attacking Trudeau was not the path to victory, even though nobody has attacked our decent prime minister more than he has. If our debased media won't point that out, we will have to. So let's get to work...

Hi Steve...I'm not sure who "she" is. But if it's the ghastly Michelle Rempel she must be buying a pipeline to hell, or Oklahoma...

Hi rumleyfips....As I watched O'Toole walking back and forth on that stage he reminded me of someone. A friend suggested a well known scam evangelist, but the Shamwow man is better. What a tool, what a fool....

hi Ottlib...I feel exactly the same as you do. Even though the Cons tripped over their shoe laces or their internal contradictions, our shameless Con media is doing its best to bury the story, and move back to attacking Justin Trudeau for no good reason. And you're right, if it had been the Liberals, our shabby media would have been going crazy and attacking Trudeau like a pack of rabid hyenas. If we want to take down the Cons, we're going to have to neutralize their shabby accomplices as well...

OT: Inside baseball story, but I saw online that Wornout is drunk tweeting again, trying to drum up some bogus conspiracy theory about "corruption" involving the LPC and Frank Graves' polling firm. SMH.

TIL, apparently Frank got him fired from Chretien's government for being an ass and he still hasn't learned his lesson. So he's out for another asinine vendetta. Hell hath no fury like a dipshit scorned.

If he keeps it up, Frank said he intends to haul Wornout's ass into court and sue him for every penny he's got. So... about a toonie?

Maybe someone should start digging into whether or not he ghostwrote JWR's book. What is it they say in the press these days, just asking questions, it would be irresponsible not to speculate.

Hi Jackie....I like and respect Frank Graves and I have only contempt for Kinsella, He’s a hideous bully and I honestly believe that he is losing his marbles. Maybe he’s just suffering from pandemic fever, but his behaviour is truly disturbing. His time is long over and he is best forgotten...