The Fatal Mistake of the Con Monster Andrew Scheer 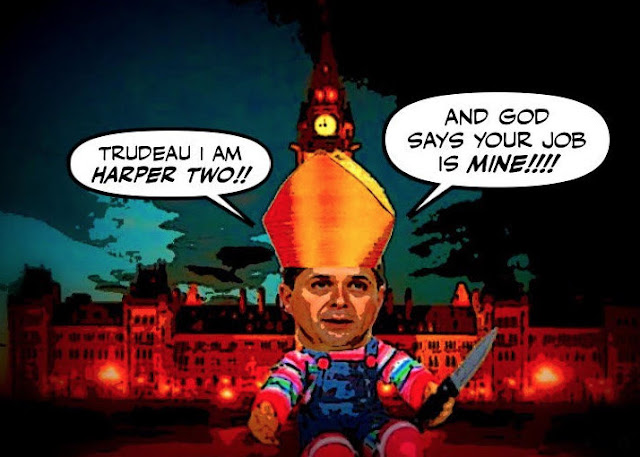 I always knew that Andrew Scheer is a Stephen Harper clone, with a Ted Bundy smile.

I knew he's so partisan he might as well be packing a knife, to jam into the back of Justin Trudeau.

I knew he's a religious fanatic who believes gay Canadians are "abhorrent" and that if he could he would jail women for having an abortion.

But who knew he's such a comedian? 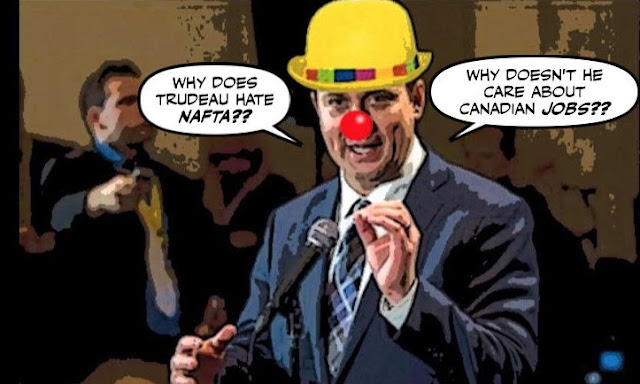 For this is hilarious.

The leader of the Official Opposition is calling out Prime Minister Justin Trudeau for "mishandling" the North American Free Trade Agreement file, less than a month before negotiations with the U.S. and Mexico get underway.

They're not working hard enough on this NAFTA [file] and they're trying to confuse issues now. So I think they're mishandling the trade file."

Trudeau couldn't be fighting harder for our country and its values.

And Scheer couldn't be more hypocritical.

After ordering Cons like Michelle Rempel and Peter Kent to trash talk their country to the Americans... 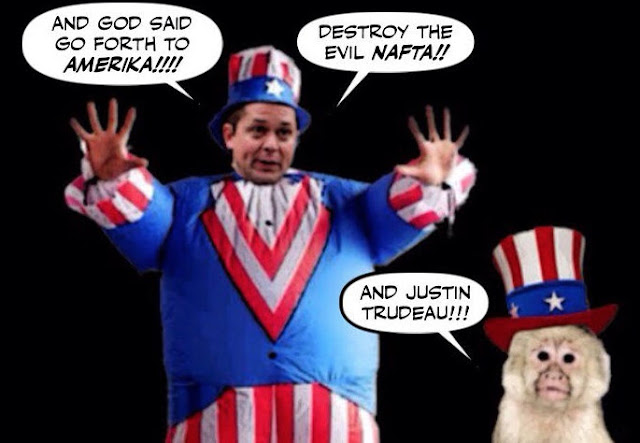 Even if it costs Canada tens of thousands of jobs.

But now the reviews are coming in, and Scheer and his Cons aren't laughing anymore.

Scheer needs to rein in his attack dogs, lest he wins the short term political battle while the people he is elected to serve lose the war.

One can disagree with the Conservative message on Khadr, but they certainly have the right to express it. At home.

Much more troubling than the message is the hypocrisy of a party which, while in government, all but accused opponents of high treason for doing just what they did last week.

While the CBC's Neil Macdonald detects the stench of treason.

The last thing we need is our politicians down in the U.S., whipping up even more ignorance and bile toward Canada among American conservatives.

The conservative American public, guided by a churlish, isolationist president, is looking for whipping boys and imagined foreign enemies at the moment.

They don't need encouraging by politicians who claim to speak for Canadians. Conservatives might try to keep in mind that it's supposed to be the Loyal Opposition.

And here's the best part: now, at last, the Cons have smelled their own foulness.

For they have dropped the Khadr settlement issue like a hot potato.

And replaced it with this campaign... 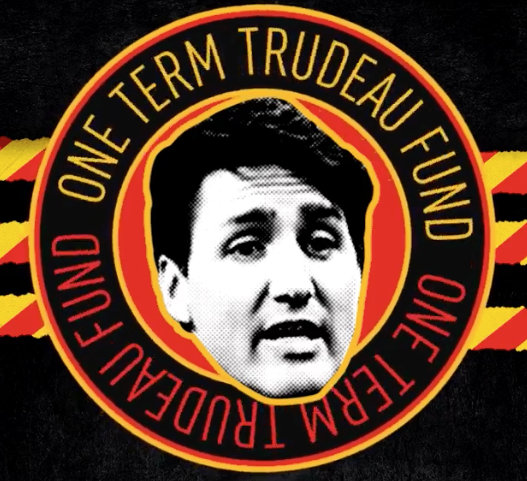 Where they use Trudeau Hate to beg for money.

And what that tells me is that the Cons have read their polls, and finally realized they have made a fatal mistake.

They have blown up their own bigot issue, and painted themselves as traitors.

Who would run to tell Trump that Justin Trudeau was a very bad boy, who pays terrorists to kill Americans.

Even if that monstrous Big Lie could cost Canadians hundreds of thousands of jobs, and throw families all over this country into poverty and despair. 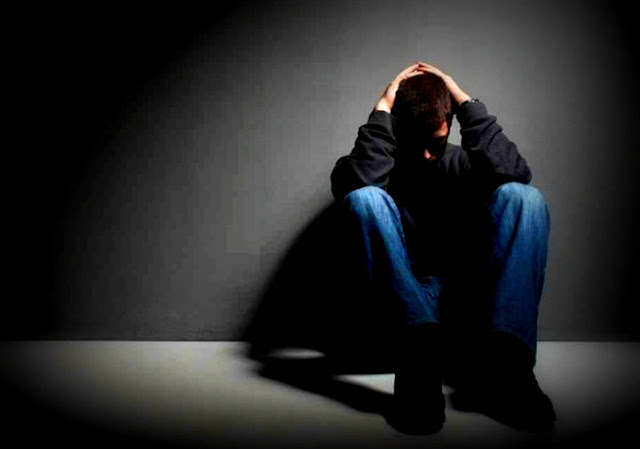 Only the Harper/Scheer Cons could do something so cruel and so grubby, and we're going to make sure Canadians never forget that.

Never forget who were the ones who behaved like Canadians, and tried to save us from the maniac Trump.

And who were the ones who licked Trump like a lollipop, and tried to hurt their own people. 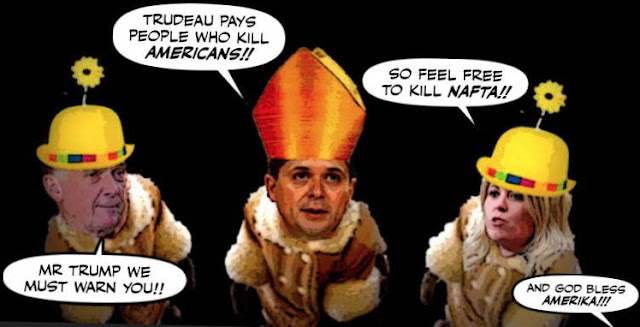 The Cons thought the Khadr issue would destroy Justin Trudeau.

But instead it only reminded Canadians that they are still the Harper Party.

Just the latest version of this freak show...

The one that helped defeat them in the last election.

And will destroy them in the next one....

Jesus on a stick you are such a bigoted fucking airhead. Yeah I get it: you hate conservatives. You're probably a fucking vegan who hates people who eat Kentucky Fried Chicken.

You also don't know the first fucking thing about journalism. So what in the fuck are you doing running a news blog? Isn't there enough fake-news in the universe without you stinking the place up with this Goebbels-like propaganda?

Fuck off with your hatred, bigotry, prejudices and Two Minutes Conservative Hate. The reason progressives haven't accomplished a goddamn thing in 50 years in North America is because people like you give the movement a bad name. You make it look like its compromised of uncompromising infants, radicals and schoolmarms.

Perhaps an intelligent progressive is an oxymoron - unless you have a fucking Ouija Board and can communicate with a fucking real one. They went with the Grand Generation - and apparently democratic civilization along with. (Not that you'd have any fucking inkling on that bandwagon of ignoramuses you are aboard.)

Then again, leave it to cons to come up with their own Two Minute Hate for liberals. As for hatred, bigotry and prejudices... I'd say the cons have the market cornered on that one.

Either that, or someone's an uncompromising purity pony who projects more than the Bat (Guano) Signal at midnight.

HI Ron...Lordy that's quite a rant. I don't want to be as rude as you, but are you having a nervous breakdown? Or are you suffering from senile dementia, or just drinking heavily? Still, I suppose that's none of my business. But I am curious, what exactly did I say in this post that got you so worked up? Does it bother you that the Con attempt to use the Khadr settlement to attack Justin Trudeau has backfired so badly? Are you now a disciple of Jumping Jesus Scheer, or a follower of Ezra Levant? I'd try to look up your blog, if it's still alive, to try to find out where you are these days, but as I recall it was unreadable and so boring it used to give me a headache, so If you don't mind I won't. What I will ask you is the next time you send a comment to my blog, you try to control yourself, or it won't be published. I mean I do enjoy riling up pseudo-progressives like you, it makes me howl with laughter. But enough is enough. And no, I'm not a vegan, and I actually like KFC, although I suspect not as much as you. In fact I can see you with your head stuck in a bucket, wandering around bumping into trees and walls and it's not a pretty picture. Now go away you deranged slob and please seek help...

Why is the right so hateful?

Simon Ron has always been an odd bird, so don't pay attention to anything he says. Just keep up the good work!

Someone forgot to tell them why they lost the last election or they think they can turn decent Canadians into the mindless idiots known as Trump supporters. Either way is as you say Simon, a fatal mistake. These sorry sacks of dung have brought nothing to the table in terms of constructive policy that would make Canada a more prosperous nation. No, it's attack, attack, attack.
To try and answer A Political Junkie's question I'd say this, normal people try to understand what they fear, the right's typical knee-jerk reaction is to hate what they fear and then try to spread it like a plague.
JD

But in this case it's true: i.e., our constitutional democratic institutions.

Like with the Khadr case. His constitutional rights were violated. Therefore he is entitled to a massive settlement. It's simple law and order. You don't flush the constitution down the toilet when things get tough. You fight even hard to preserve your society's values.

Same with journalism. If you have an opinion on a matter, you present the facts and make your case. You don't attempt to manipulate people's emotions.

The Conservatives are certainly indulging in political opportunism appealing to primitive instincts instead of the facts over this case. They are misleading the people instead of informing them. Junior is no better. Instead of standing up for constitutional values, he said he was forced to settle. (Dippers come across as self-righteous snowflakes: they also miss the mark.)

Long story short: this entire barbarian world of lies is going to come crashing down into the Anthropocene within a decade or two unless we can eradicate the rampant political, journalistic and economic corruption that is eroding the pillars of our makeshift civilization like a cancer.

We need more facts, more honesty, more thoughtfulness and less bandwagon jumping. This is about democracy. Not one side conquering the other side. When society is divided, the establishment rules – i.e., without a majority of people who can come together and offer alternative rule.

(Winston Smith fires off another pointless journal entry for the Void.)

Hi political junkie....the right is hateful because that is who they are, the scum of the earth. But Ron isn't or wasn't one of them. Him and I have argued in the past over electoral reform, but he's never attacked me like that, so I have no idea where he's now at, or what is going on....

Hi JD....thanks for giving political junkie a better answer than I did, because you're right about the fear factor. Science has shown that Cons have larger fear glands in the amygdala part of their brains. They are both intimidated and stimulated by fear, which is why they should never be allowed anywhere near power. This country is being infected by a particularly danger strain called Trumpism, and progressives are going to have to get serious and stamp it out before it spreads...

Hi anon....I will never let anyone intimidate me, but I am concerned about Waller's state of mind. He's always been a bit eccentric, but his violent outburst is deeply disturbing...

Anonymous said...
This comment has been removed by a blog administrator.
9:47 PM

The above comment was deleted because it was written by a Con, who insulted one of my decent readers as only a Con could. So let me repeat once again, Con comments are permitted only if the Cons who write them are on their best behaviour, and don't exhibit any bestial tendencies, like bigotry, misogyny, homophobia, etc, etc.
Failing that they'll be instantly deleted. Or forwarded to the mailbox or the asshole of Ezra Levant's Rebel.

Thank you for your attention.