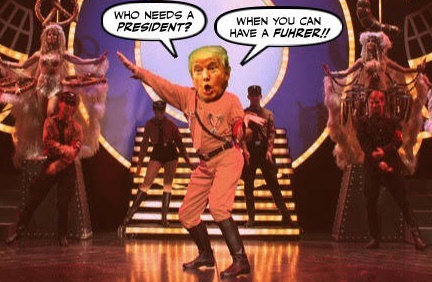 He's been rehearsing for the role for a long time, from the days when he kept a copy of Hitler's speeches on his bedside table.

And yesterday Donald Drumph finally got his chance to play his Nazi hero.

When he turned a Boy Scout Jamboree into a partisan political meeting.

Or the closest thing to a Hitler Youth rally...


Complete with chants of USA, USA.

And a speech that was all about himself.

The president threatened to fire one of his Cabinet members, attacked former president Barack Obama, dissed his former rival Hillary Clinton, marveled at the size of the crowd, warned the boys about the “fake media,” mocked pollsters and pundits, and said more people would say “Merry Christmas” under his presidency.

And couldn't have been more disgusting. 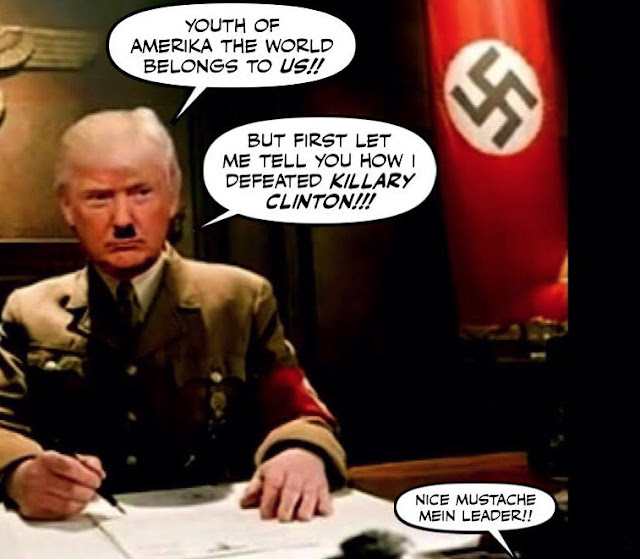 “You know, I go to Washington and I see all these politicians, and I see the swamp and it’s not a good place. In fact today I said, ‘We ought to change it from the word swamp to the word cesspool or perhaps to the word sewer,’ but it’s not good. Not good.”

He accidentally said “sex”: “Each of these leaders will tell you that their road to American sex. And you have to understand—their American success…”

He told a meandering five-minute story about developer William Levitt: “He sold his company for a tremendous amount of money and he went out and bought a big yacht and he had a very interesting life. I won’t go any more than that because you’re Boy Scouts, I’m not going to tell you what he did — should I tell you? Should I tell you? Oh, you’re Boy Scouts, but you know life, you know life.”

His threat to fire his Health Secretary Tom Price has to be seen to be believed...

For it has fascist bully written all over it.

And needless to say many Scout leaders were not amused.

But then what do they expect?

When a pussy grabber and a political pervert is invited to address a group of children.

And at least two things couldn't be clearer... 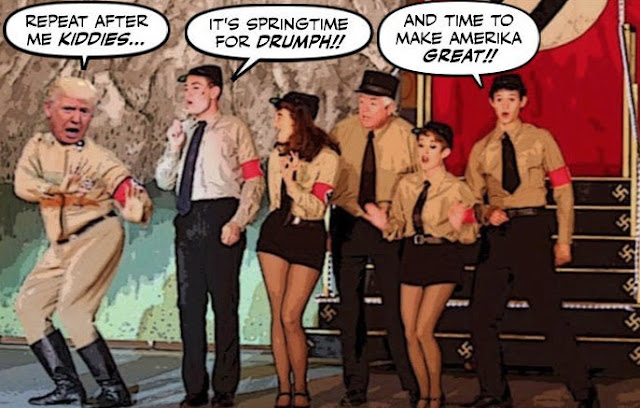 One, the orange fuhrer is rapidly losing touch with reality, or losing his marbles.

And two, many Democrats and Republicans can finally agree about something.

A man who corrupts the youth of the nation, is unfit to be its president...
Posted by Simon at 7:18 AM

Labels: Boy Scouts of America, Donald Trump, fascism, The Rise and Fall of the Orange Oaf

His smearing of Jeff Sessions is not going well with hard core Repugs. Imagine all the shit he's pulled and bullying a Klansman will be his undoing? I'll take what I can get, I guess.

The kids were shouting we love Trump and booing Obama. And can you believe it Simon? I didn't see a single rainbow flag in the crowd. The horror!

Huh? Where have you seen ANY evidence that Republicans agree that a man who corrupts the youth of the nation is unfit to be its president?! This is the party that voted in a serial child molester as speaker of the House!

Americans can go to springtime for Hitler all season. In fact they have been doing this, buying out the house in armaments since the end of WW2. Another definition of Fascism may be arming up to a power of ten against your most capable opponent. Harper wanted Canada to play this game. We cant even find the coin to meet the floor of any military play. Thank Goodness.

All this goof does is whine and bitch on twitter. As a fiscal conservative myself, this is absolutely deplorable.

My partner says this is the most disgusting thing yet. Mind you, she was never in Boy Scouts.

I'm an ecosocialist, but actually his behaviour is irrelevant to fiscal conservatism. He is hardly "prudent".

Hi anon...I know how you feel. It's hard to feel any sympathy for the ghastly Klan midget Sessions. But it seems clear to me that Trump wants to fire him so he can fire Mueller. And if that happens we can stop calling the U.S. a democracy, and who knows what Trump would do after that. My guess is start a war somewhere, most likely with Iran. Those who elected that maniac can never be punished enough...

Hi Con...yes I did notice that some of the kids were cheering but kids will be kids, those are too young to vote, and those slightly older who can vote are about 80% against Trump. I realize yesterday's Nuremberg style rally must have got you really excited and no doubt screaming Seig Heil or Seig Trump, but any rational person would see what happened there as a sign that Trump is heading for his downfall...

Hi anon...although I am pretty hardcore and loathe the Republican Party, I have relatives and friends in Maine who are Republicans but are still decent. They would be horrified to see Trump addressing a Boy Scout jamboree the way he did, and if Trump loses the support of those Republican moderates he'll be in real trouble...

Hi Steve...while it's true that the U.S. Has been on an armaments spree since the end of WW2, there are a lot of young Americans who never came home from Europe who if they were alive would put a spoke in Drumph's wheel. Whenever I despair about Americans I think about those glorious dead, and feel more confident about the future...

Hi Way Way Up....I'm the kind of person who would normally roar with laughter at the antics of an oaf like Trump. And I find it hard to believe that I have to check his insane Twitter feed every day to determine whether he has finally gone off the deep end. But he is without doubt the worst president I have ever known and he is certainly no fiscal conservative. He is still claiming that he will run a surplus by the end of his first term, even though the Congressional Budget Ofgice is predicting one of the most massive deficits the U.S. Has ever seen. And that's if he doesn't bring down our economic system, or plunge us all into some insane war. It really is a nightmare and it can't end soon enough...

Hi Scotty....I can relate to where your partner is coming from. It is really inexcusable for a president to act like Trump did before all those young people. The man has no class and no shame. And I was a Boy Scout, albeit a rather bad one who was expelled along with other members of my badger patrol for getting into too many fights. But since the people we fought were bullies and bigots I'm not sorry at all... ;)

Hi lagatta....yes, as I said above Trump is the opposite of a fiscal conservative. When you examine his business dealings it's all smoke and mirrors. How he hasn't been jailed for fraud is beyond me. And to think he's half Scottish, who are supposed to be thrifty, is also beyond belief, and too horrible to think about...;)

How was copper wire invented? A Scotsman and a Dutchman spotted a penny in the street at the same time.

The following pretty well summarizes the state of the Trump presidency...a scene from Alice in Wonderland at best or a loonie in charge of a psycho ward at worst. Link to a NYT article on a conversation between two senators when they thought the mic was turned off. http://www.msn.com/en-ca/news/politics/senators-on-hot-mic-trump-is-%e2%80%98crazy%e2%80%99-%e2%80%98i%e2%80%99m-worried%e2%80%99/ar-AAoPtlm?li=AAggFp5
RT

It doesn't change the fact that Republicans, moderate and neo-Nazi, voted for a deranged narcissist who boasts of pussy grabbing and calling his own daughter a "piece of ass." The Republican party is the party of people who would force a 12-year-old girl to bear the child of her rapist in the name of Jay Zeus. A Republican moderate is simply someone who's glad to stick a knife in you, but doesn't have the guts to twist it.