What a crazy world..... In the House of Monkeys the brutish yankee-style neocon Stephen Harper accuses the opposition of being "soft on terrorism" and of "denigrating the police."

And then goes even further.

"Any party that doesn't take the national security of Canadians seriously will never be chosen by Canadians to form the government of Canada," Harper told reporters.

As if the democratic opposition was betraying Canada and its values, like the yankee loving traitor Harper. Instead of defending them, as the New York Times points out.

"Lawmakers have only to look to the Canadian court for easy-to-follow directions back to the high ground on basic human rights and civil liberties."

As well as reminding us that Harper's demagogic and fascist argument about security is exactly the same as the one Chimp Bush used.... to try to turn the U.S. into a police state.

"That is just the sort of argument the Bush administration used to ram the excesses of the Patriot Act and the 2006 Military Commissions Act through Congress, and offered as an excuse for other abusive policies, like President Bush’s illegal wiretapping of international calls and e-mail."

The same criminal Bush administration...the one that Harper and his neocons follow so slavishly.... that in the name of the Great War on Terror is now secretly funding Al Qaeda

"According to investigative reporter Seymour Hersh, the Bush administration, with Saudi Arabia, is secretly funding radical Sunni groups - some with ties to al-Qaeda - to counter Shiite groups backed by Iran. Moreover, this is being done without any Congressional authority or oversight." 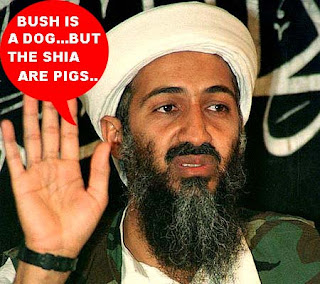 So let me get this straight..... First after they are attacked by a group of Saudi Arabian Sunni religious fanatics ....who planned 911 in a Hamburg mosque....they launch the Great War on Terror by attacking Iraq the only secular state in the region. And the one keeping Iran in check.Then they help install a Shiite Islamic republic that is really a puppet of Iran. Then they allow Israel to make heroes out of Hezbollah in Lebanon.

Now they find themselves facing a Shiite conspiracy stretching all the way from Iraq to the West Bank. So together with Saudi Arabia they start funding Sunni extremists ...some of whom have ties to Al Qaeda. The same group that triggered the Great War on Terror by attacking them in the first place.

Huh? Is that crazy or what?

Just as crazy as Harper is when he attacks the integrity of decent Canadians standing up for our precious Canadian values. While he does everything he can to destroy them.

But at least we now know how to destroy him and his ReformCon Party. By linking Great Fat Fascist Leader to Chimp Bush as firmly as these stooges are... 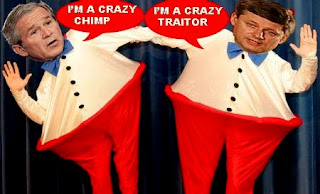 Every time Great Fat Leader opens his dirty fascist mouth .....real Canadians should reply by asking him why is he trying to rape the rights of women and minorities? Why is he trying to destroy the future of our children? Why is he pimping for the oil patch....instead of trying to save the planet.? Why is he trying to rig the courts by stacking them with right-wing crazies? Why is his government crawling with his crazy theocon homophobe friends? What is his hidden agenda? Why oh why does he want a majority so badly?

And above all....why is he trying to destroy our beautiful country and its values and turn us into a stooge version of Chimp Bush's Amerika?

This isn't politics any longer....it's war. It's a matter of survival.

Because until Harper and his ReformCons are deposited head first in the garbage can of history. Canada won't be Canada again.

What a crazy world..... In the House of Monkeys the brutish yankee-style neocon Stephen Harper accuses the opposition of being "soft on terrorism"

So, uh, is he wrong? You seem to dance around the issue, and never bother to address exactly when Jack Layton was tough on terrorism. Was it when he gave known terrorist Maher Arar only a half hug?

(As for "Chimp Bush", you do know that all asians look like moneys too, right?)

He's rigging the courts to unseat the Lieberals that were rigged by the Lieberals for about a million years.
The ones that seem to love criminals and crime so much.

Love Child....I don't have a very high regard for politicians of any party...but I don't think any of them are "soft on terrorism." Anyone who thinks that hasn't been taking their medication. Bad boy...
As for your "joke" aabout Chimp Bush...well that's just despicable.
I didn't invent the moniker but it's not about how he looks...it's just a comment on his very low IQ. But I blame your filthy comment on your mother Anne Coulter...she's a dirty racist too...

Anonymous....I don't like anyone rigging anything...and I don't like Liberal Pig patronage either.
But leave the judges out of it. They are chosen by a responsible panel of jurists, and they are admired around the civilized world. And by the way I remind you that the crime rate is going down...so what are you talking about?

The very tired Bush is an idiot meme.
He did of course graduate from both Harvard and Yale, but as community-college theater major drop-outs will remind you, he only got a C average, the middle of the pack of those getting advanced degrees from America's two preeminent universities.
Do you think your IQ is higher than Bush's Simon.

Oh come on...EVERYONE knows that the Chimp got into university just like he got into the National Guard to avoid the Vietnam War...big daddy pulled the strings. Besides didn't he spend all his time there getting blotto drunk and snorting cocaine?
As for whether I think I have a higher IQ than the Chimp? Good question...but too easy. I may be really dum...but compared to the Monkey President I'm a genius...

In the National Guard Bush flew over 300 hours in the F-102 Delta Dagger, (gives one a boner don't it) one of the most difficult jet fighters to fly ever built. Was his daddy sitting there beside him on the joystick! (oh another boner.)

You got to admit he is a little chimp looking!