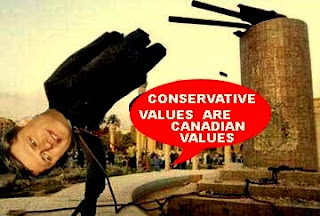 Wasn't the timing perfect? On the very day that Great Fat Leader has his Nuremberg Speech to mark the one-year anniversary of his ReformCon Regime's rise to power...

Along comes Garth Turner and knocks the fatso off his perch. By pooping on his party.

And soon nobody could even remember what President Porko said. All everybody wanted to hear was what Garth had to say. That's all people were talking about.

Even the trained seals at the Blogging Tories.

Talk about a propaganda bust. Oink. Oink. First they run those crude ads during the superbowl and make themselves look like yankee stooges. Now this. Mwahahaha!!!

But then what do they have to celebrate?

Decent Canadians in this country have lost a lot. We have had to look on helplessly as these brutish ideological extremists have raped the rights of women, gays, and other minorities. Destroyed a childcare program that would have helped millions of Canadian children and their parents. Planned and plotted to put more children in jail. Hurt the poor and blown the rich..... and the religious fanatics that infest their government like cockroaches. Dragged us deeper into a crazy war in Afghanistan. And ruined our proud reputation abroad.

Oh yes we've lost a lot......and so has our beautiful country. But so have these filthy Cons. 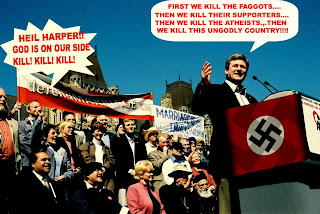 One year later they now know that their thousand year ReformCon Reich will never happen. That Conservative values will never be Canadian values. Only Amerikan ones....or the values of the mortally wounded Chimp Bush regime.

They've run out of history. Stephen Harper will always be the guy who had a majority in his grasp. And blew it.

Today Great Fat Leader may have fallen off his pedestal. Just like Saddam. Today this Climate Change Denier is pretending he's gone green. Sooner or later he will be REALLY green.

Sooner or later Canadians will have had their fill of him.

speaking of idiots that need to hang, have a gander at the shit some Canuck sees fit to spread via mass email:

quote: Wouldn't it be pretty amazing, if this caught on, all over the country...?
New Telephone Greeting:

"GOOD MORNING, WELCOME TO CANADA"
"Press "1" if you speak English."
"Press '2' to disconnect until you can.

I hope to build up a decent string of emails with the bloody shitstain that sent it to me via an olde email account.