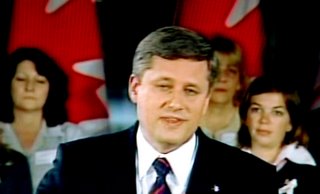 It's pretty hard to fuckup something like a 9/11 memorial. The memories are too haunting. The pain still too real. But our lamentable lackey of a Prime Minister still managed to do that. And disgrace himself in the process.

Not only did he use the occasion to link 9/11 to what's happening in Afghanistan. Not only did he act really weird and geeky and flash his sharky smile at all the wrong times.

He used grieving loved ones of the 9/11 dead, and anxious relatives of our soldiers as cheap props to try to make his point. As Susan Delacourt pointed out recently Harper is obsessed with back drops. Too bad he doesn't have any class.

Or know what he's talking about.... Let's get one thing absolutely clear. We may have very good reasons to be in Afghanistan. But the so-called war on terror isn't one of them. Once upon a time it was, but it isn't anymore. The 9/11 plan was hatched in a greasy mosque in Hamburg. The real danger comes from places like Saudi Arabia and Pakistan. But wait aren't the Pakistanis on our side? No they're not.

And one more thing... our soldiers may be fighting bravely in Afghanistan. Maybe they can make a difference and improve the lives of the poor Afghan people. I hope so. But nothing they do there will make us any safer in Canada. On the contrary it will make us more of a possible terrorist target. More vulnerable to the danger from within.

But of course Harper doesn't care about that. All he was trying to do was play politics, and try to stop the bleeding on the Afghanistan issue. Particularly in Quebec. But once again he made an unfortunate mistake.You see Chimp Bush was out there today as well, trying to link his insane War on Terror to the crazy war in Iraq.

And that echo is going to cost Harper even more votes in Quebec.

"It's not going to make Quebecers any happier with Stephen Harper's foreign policy....in fact, quite the opposite..."

Imagine how they are going to react when Harper begins his wretched attack on same sex marriage.

In the meantime spare a thought for the people Harper used as props today for nothing more than cheap politics.

The grieving loved ones of the 9/11 dead.

And our fighting soldiers in Afghanistan...

_Sweet Prime Minister of my-yi-yine?
_Sorry, I was too distracted by Harper's swaying Axl Rose impersonation during his speech yesterday.

Hi Classic...I know what you mean. For a while I thought that maybe Harpo had screwed up his asthma medication, and had taken some kind of powerful curare like drug instead.Then I remembered one memorable for all the wrong reasons Lou Reed concert.He turned up about three hours late, and if he needed some heroin, he obviously hadn't scored that day. It got so bad another junkie ran at him with a syringe, only to fall flat on his face, and jab the bouncer instead. And it went downhill from there. It was the worst show I've ever seen. But at least it was entertaining. Harper's pathetic little show wasn't just weird it was boring...