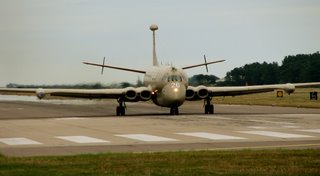 A few weeks ago I took this picture of a Nimrod at RAF base Kinloss. Now the base is in mourning after one of these planes crashed in Afghanistan. I wish I was there tonight to tell them how sorry I feel.

But here in Canada of course, we're also mourning our dead.

I'm really sad for all the families in Scotland and Canada. But right now I'm also angry.

I just turned on the tv to see John Thompson from the MacKenzie Institute being asked about the latest casualties, and here's what that blowhard said.

When he was asked what he thought about Jack Layton's position on Afghanistan, he accused him of looking at the world through the wrong end of a sewer pipe. I'm not sure about Layton's position. But I am sure of one thing. If there is that kind of world view sewer pipe it must be firmly planted up that blowhard's ass.

There may be some really good reasons to be in Afghanistan. Helping to rebuild that desperately poor country, and protecting the rights of women and gay people. But since we don't have enough troops, enough of the right equipment, or enough development money to do that , all we're doing is dying or being mutilated, or killing hundreds and making thousands of new enemies. While the country turns into a narco state.

And what kind of social progress do we really expect in a country that calls itself the ISLAMIC Republic of Afghanistan? Let's face it folks, not much.

As for the war on terror don't make me laugh. Those miserable, ignorant Taliban are about as much of a threat to us in Canada as rabid raccoons. They probably couldn't even find us on the map. Just like we can't find the real terrorists because they live in places like Saudi Arabia, Iran, Syria, and Pakistan. And we don't dare go there.

Besides, as every major terrorist attack on a Western country has shown, New York, London, Madrid. The real threat to our safety in this dangerous world comes from within. From jihadists living amongst us who are are driven to murderous action mostly because of what Western soldiers on combat missions are doing in Muslim lands.

In a desperate attempt to save his Republican Mafia, Chimp Bush has started making more noises again about how the criminal war in Iraq is the frontline in the war against terror But we should be smarter than that. And not let our homegrown neocons do the same thing with the war in Afghanistan.

If we want to make Canada a safer and better place to live in, we should invest way more money and resources in CSIS and the RCMP. and specialized anti-terrorist squads. And use our troops for muscular peacekeeping missions like keeping Israel and Hezbollah apart in Lebanon. Or helping save the dying women and children in the burning villages of Darfur.

Places where we can make a real difference, and peace and hope still have a chance.

Oh I know our brave soldiers in Afghanistan have the best of intentions. That most of them believe in the mission. Believe that they can really win a war like that. But the road to hell is paved with good intentions. And as one grizzled combat veteran once told me: Simon, hope is not a method and neither is enthusiasm...

To tell you the truth I'm so sad, angry, and conflicted right now I don't know what we should do. There are no easy answers.

But all I know is that the Brits have been asking a lot of hard questions about the mission in Afghanistan.

And I think it's about time we did too...

Oh yeah...one more thing. I'm glad one of these ugly critters wasn't at the airshow today. I would have loved to see one again. And cheer its Kinloss crew on. 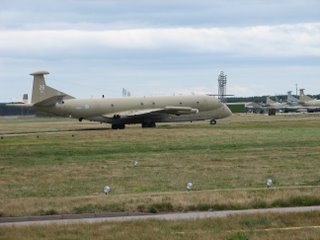 But it probably would have broken my heart...
Posted by Simon at 6:11 PM