The Peter and Condi Show 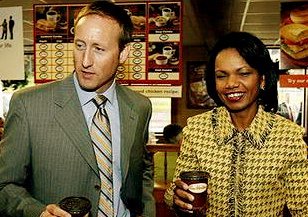 Oh my poor Canada. How much more humiliation can we take? Yesterday President Harpo disgraces us by turning a 9/11 memorial into a stars and stripes plug for the War in Afghanistan. Today we're forced to contemplate the ugly spectacle of our Minister of American Affairs Peter MacKay going ga ga over Condi Rice.......In a Tim Hortons of all places.

Holy Timbits! Is nothing sacred? A Peter and Condi show in a Timmys? That's practically treason. Hit me with a Boston Pie. Aren't the donut kings supposed to be on our side?

And can you believe how quickly Condi changed from thanking Canadians for their help after 9/11. To demanding that we stay in Afghanistan. i.e. Send even more troops. Talk about a double double.

So we're playing an "absolutely critical" role in the American-led War on Terror. I thought we were in Afghanistan as part of a U.N. mission to rebuild the country. I must have missed it. When did we sign up for Chimp Bush's crazy war?

But I suppose it could have been worse. I mean just check out this photo.

Uh Oh.What IS Potato Pete up to? Talk about making sure Condi knows he's REALLY happy to see her. I mean is that a banana in his pocket? Or just a very large coffee stirrer?

Poor Condi must have been mortified. But then the warmongering bitch deserves to be. The only thing that could have amused me more was if MacKay's dog (the one he used as prop when Belinda dumped him) had entered the coffee shop. And started humping her leg.

Still.....with that level of inflatuation we're lucky Dumbo Pete didn't pledge our entire reserves, the Governor General's footguards, The Blogging Tories and the Boy Scouts. So we can lose the war right away. And Harper won't lose any more votes in Quebec.

Besides who does our Minister of American Affairs think he is....Churchill?

"If we leave it to the terrorists that continue to flourish in Afghanistan they'll find us.They'll come here and they'll try to wreak havoc in our lives. That's a given. That will happen..."

"We cannot retreat, we cannot come back. Boats are safe in the harbour, but that's not what they're made for..."

Huh? What's that supposed to mean? Could the Taliban really swim all the way to Canada? Do we really have to go out and fish for them? Or can we just tell Customs to be on the lookout for hairy savages, with black turbans and kalachnikovs?

I'd laugh at all this chickenhawk rhetoric. If the situation wasn't so desperate. NATO commanders in Afghanistan urgently need more troops and equipment. But their calls for help are falling on deaf ears.

If NATO can't come up with more soldiers, Britain and Canada will have to provide them. Oh wait we already are.

And Van Doos too. I don't know if that will cause the Taliban to surrender. But Harper might as well run up the white flag in Quebec.

But they're still a drop in the bucket. If NATO can't rustle up some more, some might even question the value of the alliance.

Hey you never know. The war in Afghanistan might be NATO's biggest battle.

But the way things are going it might also be its last.

No wonder Condi ended up in a Tim Hortons. No wonder she let Potato Pete fall all over her.

No wonder she looked so desperate. Talked about Afghanistan coming back to haunt us.

She's right about that one. Thanks to her criminal regime, and its pathetic little puppets in Canada.

Talk about a double double...