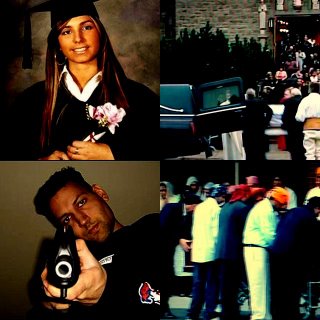 "Noticeably absent amongst the mourners were people Gill's age, likely to be friends of his rather than his parents."

No wonder he was so lonely.

An English teacher who once taught him when he was fourteen wrote a column in the Globe today claiming he hadn't been bullied. And that it was all his fault.

"....the real question should be why he did it, not what others did or didn't do. In the sombre aftermath of another school shooting — one that claimed a young life — blame must be assigned to Mr. Gill and not to those on the periphery of his life...."

" .....Only one angel of death can dance on the head of this pin of sorrow and that is Kimveer Gill.....He should not be permitted to become a victim..."

Except of course he was. And a lot of shit can happen between the ages of fourteen and twenty-five. He may have committed a monstrous act of senseless violence. What he did was inexcusable. He caused so much terrible suffering.

But you only have to read his sad and pathetic blog entries, to realize that before he killed... and before he blew his brains out..... he had suffered terribly too.

He's a textbook case of clinical depression. He tried to receive help after his mother was diagnosed with breast cancer two years ago. But it just got worse and worse. It must have hollowed him out inside as depression, if left untreated, eventually does.

Until he only really lived in the virtual character Trench he created on his vampire blog. Where he could be what he said he was. And send out one barely concealed cry for help after the other. That no one ever heard.

But as depression and loneliness continued to drain away his energy, leaving him listless and feeling dead inside, even that fizzled out.

His Angel of Death posts once full of bravado and threats were reduced to stuff like "Meh...life sucks..." Or "Fuck the world." Or sometimes just nothing at all..... 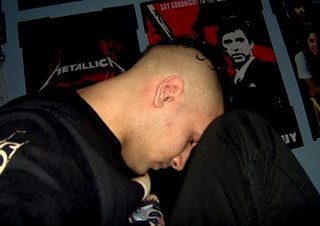 His heroes, the Columbine killers Eric Harris and Dylan Klebold, choreographed their bloody departure from this world. With their diaries and journals and their infamous Basement Tapes.

Their final words weren't much..... but they were something:

Dylan: "Hey mom. I gotta go. It's about a half an hour till judgment day. I just wanted to apologize to you guys for any crap this might instigate as far as (inaudible) or something. Just know I'm going to a better place. I didn't like life too much, and I know I'll be happy wherever the fuck I go. So I'm gone. Good-bye. Reb..."

Eric: "Yeah... Everyone I love, I'm really sorry about all this. I know my mom and dad will be just like.. just fucking shocked beyond belief. I'm sorry, all right. I can't help it."

But exactly two hours to the minute before he started shooting, all Kimveer wrote in his last post was this:

'Whiskey in the morning, mmmm mm,mm, good!!' on dave chappelle... 'I call white people niggahs too, it's just fun. It's all Dave Chappelle's fault.' mood: 'no mood' music: megadeth - a tout le monde."

By the end of his life he was too sick and dead inside and too deep soul exhausted to even write a suicide note. To try to explain, say sorry, or even celebrate the last act in his sad and lonely life. The one that he hoped in his sick mind would make up for everything that had come before. Or everything that hadn't.

I've seen a lot of stuff in the media recently about how Kimveer Gill was just a monster and an evil person. Some people seem to get their kicks beating up on the dead. As if it will do any good. But I don't go along with that.

He did commit a monstrous, cruel and unforgivable act. He stole a precious life, and hurt so many people who had never done him any harm.

But everything seems to show that he was slowly consumed by a dark depression that eventually blotted out all the light in his life. It's not a question of good or evil. It's so easy to turn it into that in this increasingly black and white world. But you can't just wish something like that away.

So as far as I'm concerned he's a victim too.

If we can't understand that how can we save the others?

So it doesn't happen again...

I thought so too. Particularly when I came across the picture of Kimveer Gill that I used. I probably didn't have to write anything to go with it.It kind of spoke volumes. Suddenly he doesn't look like the crazy gunman he was pretending to be and eventually was. He just looks like a poor, lonely, fucked up kid. The saddest thing for me was the torrent of cheap vitriol aimed at him after his death. It has been nauseating and it's not the kind of stuff I expect from Canadians. I don't expect people to forgive him for what he did. But I do expect them to try to understand so we can reach out and help other troubled young people so hopefully it doesn't happen again. In this case we only had to save one kid, and we would have saved them all...