Donald Trump and the Stench in the White House 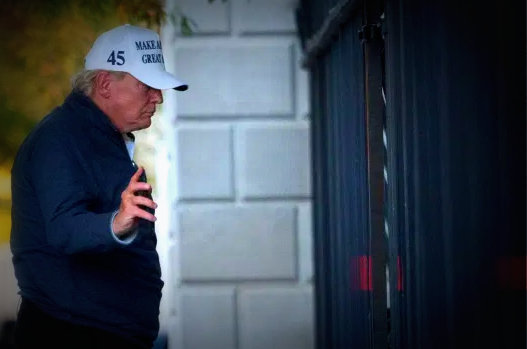 When I saw this picture of Donald Trump the other day, I almost felt sorry for him.

He had been playing golf when he found out that the TV networks had finally called the election, and that he was now officially a loser.

And I had never seen him look so beaten, so broken, and so human.

But then I took a closer look and I was horrified. 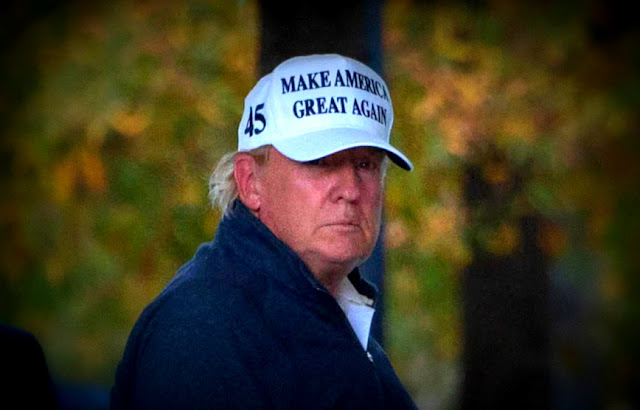 For it was the same ugly Trump, the same crazy beast, determined never to concede.

A diseased fascist demagogue who according to his niece, is sure to start to start breaking things with a vengeance.

President Donald Trump, infuriated by an election loss he’s refusing to acknowledge, will have “meltdowns upon meltdowns” until he leaves the White House, his niece Mary Trump warned in an op-ed in The Guardian Sunday.

Trump is “not going to concede. ... He’s not going to engage in the normal activities that guarantee a peaceful transition. All he’s got now is breaking stuff, and he’s going to do that with a vengeance,” she wrote.

A sick man who can't accept that he lost the election and despite all the harm he has done, and all the people who have died because of his indifference and incompetence, can only feel sorry for himself... 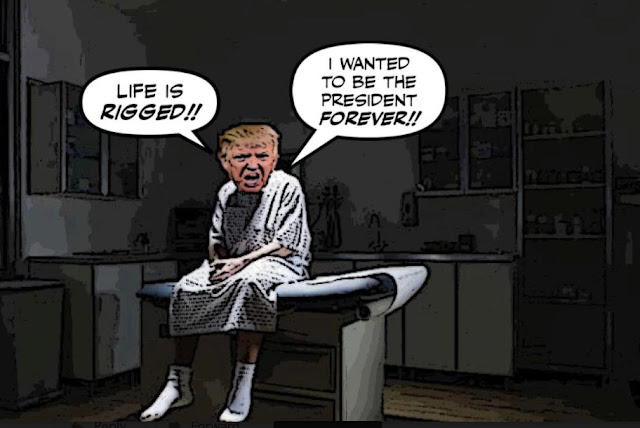 But if all of that is deeply disturbing, his claims that the election was "stolen" are downright dangerous... 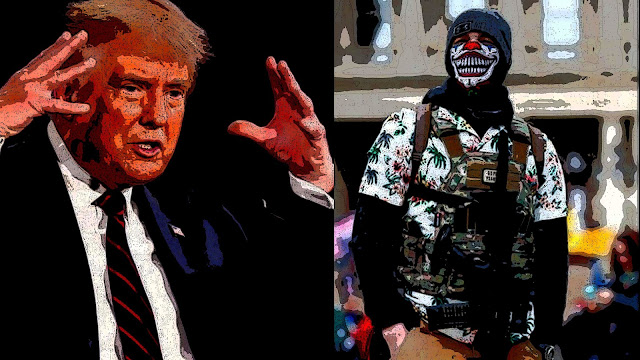 For some of his supporters are so fanatical and so violent they are quite capable of trying to kill Joe Biden or massacre his supporters.

All of which helps explain the stench wafting out of the White House.

It’s been two days since President-elect Joe Biden was declared the winner of the 2020 election — and President Donald Trump has reportedly been coping by downing large amounts of fast food.

“Insiders described the atmosphere inside the West Wing as ‘manic, exuberant, energised and toxic,’ with some staff lighting rose-scented candles in an attempt to soften the environment — and to combat the smell of fast-food delivered to the President and his inner circle,” the publication writes.

And it shouldn't surprise anybody...

For it has always been hard to tell one end of Trump from the other.

And judging from this photo today all that fast food is making him look more pig than human... 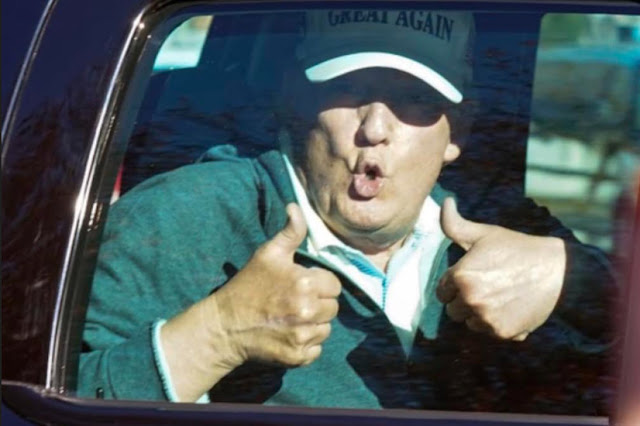 In fact if I was his doctor, I'd recommend he resign tomorrow, before his black heart gives out, and he hits the floor with a sickening thud.

None of this is going to change the final outcome.

The people have spoken and have decided that Trump is unfit to be President... 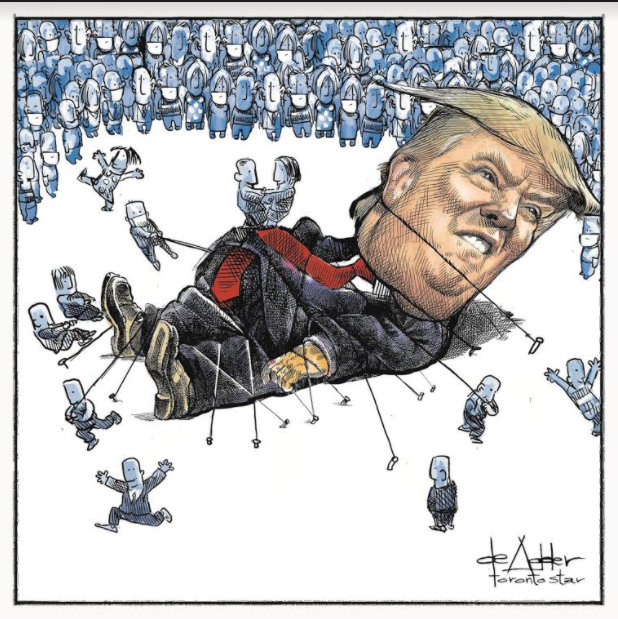 And that he must be restrained for his protection and the protection of others.
So the more Trump tries to resist the inevitable, the worse he will look, and the more damage he will do to his party, as well as to the Con Trumpanzees in this country of which there are many.

And of course, if he refuses to leave the White House he will have to be evicted.

By whatever means necessary... 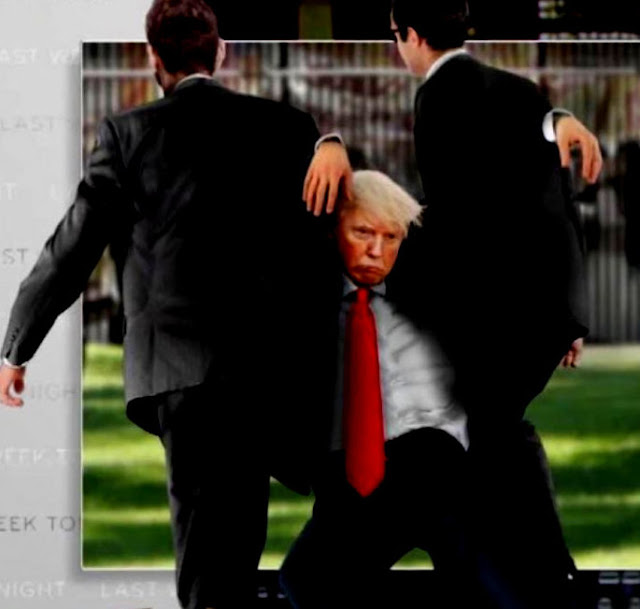 And the nightmare years of Donald Trump will end in disgrace and humiliation.

Just as I always said they would... 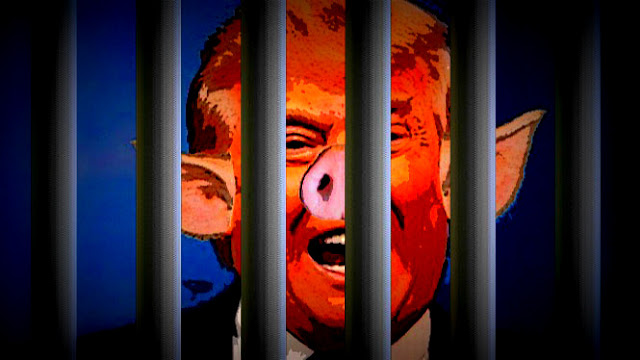 Finally, to all the Con Trumpanzees who bombarded me with vile comments over the years claiming their darling hoggy couldn't lose, I just want to say I feel your pain.

And I'm enjoying every minute...

It's a sad, pathetic spectacle that's taking place. A temper tantrum of biblical proportions that wont end well for this waste of orange tinted skin. While president plump gorges on his buckets of chicken and his triple burgers, coupled with his stress levels, I'm comforted by the fact that his next stroke may not be on the golf course. Barring that and in the meantime, I urge you, Simon, as well as anyone worldwide with a following, it's time to redeploy the Trump baby blimp.
JD

I wrote a piece on Alex Trebek's passing and what it means for this momentous occasion at the crossroads of history. Trump(ism) and populism writ large are the junk food corroding the arteries of democracy. If you ever saw the film Super Size Me the metaphor truly fits.

The antidote is for the United States and its imperiled allies to be put on a strict diet of facts, brutal honesty, and substantive information guiding the public on a road to restoration and, yes, reconciliation. You are what you eat or what your brain digests as food for thought, and what Trump and his ilk regurgitate is nothing but pig swill emanating from the rear chute. Biden will have to conduct triage and stage an intervention before even beginning to think about recovery. As the old saying goes among computer programmers, garbage in, garbage out.

One therefore hopes that the future belongs to the Trebekists and Trudeauists -- teachers, thinkers, lifelong learners -- rather than the Toole Men and Trumpsters feeding from the dumpster, a bunch of clowns gorging on cheeseburgers (or cheesecakes) and feasting upon ignorance while claiming everyone else is a loser with all the wrong answers. Otherwise, the lingering pollution stench could put the heart of democracy in, well, jeopardy.

There is certainly an undemocratic stench in the house but the Republicons are desperate so they will continue to support the stinker while they try and dismantle parts of the election process.
Their problem is that early mail in ballots has completely disrupted their election strategy, GOP supporters automatically discount any information that conflicts with their beliefs so the only election propaganda they respond to is emotional mind candy that agitates them enough to vote. Democrats on the other hand are information processors with an idealistic bent. A steady parade of conflicting election propaganda takes time to process and often suggests their party is not perfect. This results in a disincentive to vote and rather than face a jubilant Trump crowd after a mega rally some just stay at home on election day. Mail in ballots fix that. In the quiet of their own home the purist leaning information processors realize that although there is conflicting information on balance they should vote Democrat and sometime during the month preceding the election fill in the ballot without being intimidated by the crowd on election day. Massive use of mail in ballots puts the whole Trumpster mega spectacle and underlying strategy in the dumpster. Perhaps if early mail in balloting becomes the norm the Cons will actually have to start helping people in order to get elected.

Hi JD...It is a sad and pathetic spectacle, but the longer it drags on the more I wonder how it will end. I have been reading some of the Trump sites and the level of fanaticism is so great, I don’t see how catastrophe can be avoided. Trump has done many bad things in his sordid career but this is the worst, and unless somebody can restrain him and force him to concede the U.S could find itself on the verge of massive violent unrest. My only consolation is that if that does happen, Trump can be charged with treason and hopefully jailed or even executed...

Hi Jackie....I’m afraid to say I never watched Jeopardy but I found your post fascinating. I am so impressed by your knowledge of Canadian history political and cultural. Education and facts are what we need to counter the wave of ignorance that is threatening to swamp us. I have spent some time recently surfing MAGA sites and I have been shocked at the parallel universe the MAGA maggots inhabit. I don’t think I am exaggerating when I say that we will soon find ourselves at war with Trump’s barbarians. And I don’t mean just Americans but Canadians as well. So start digging those trenches, and we’ll be there soon!!

Hi RT....Yes, it’s interesting what a big role the pandemic played to at the very least fool Trump and his MAGA dummies into believing they had won. I’m still laughing at that one, and Trump still doesn’t get it, which is even more hilarious. But of course Trump is now a very dangerous man, if he wasn’t the president he would be confined in a mental hospital. His unwashed hordes are planning a “Million MAGA March” on Washington DC next Saturday. What happens when they get there, will probably determine whether there will be peace or whether it will be war...

drip drip drip of reality is dissolving the Trump reality distortion field, I swear I see him shrinking.

A good lie spreads so much faster than the truth, that's what makes them so powerful. The problem is their half life is shorter than the truth so a new one has to be conjured up before truth overtakes it. Traditionally Trump has accomplished this by shifting the focus of the lie from say Ukraine/Biden to Covid salvation is around the corner. His current problem is he lost the election so shifting lies to something else is not useful which traps him into trying to create bigger election lies. Perhaps reputable law firms will back the first lie but start to run afoul of their own ethics when the first unsubstantiated lie is replaced with subsequent lies. Then along comes Rudi with a lead filled life preserver. There doesn't seem to be a lie that can save the election loss unless perhaps he can conjure up a national crisis that makes transfer of power unfeasible for security reasons. The clown is desperate, lets hope he will be content with his ego lying to him about a 2024 comeback either for himself or one of his spawns.

The Stench of the MSM in Canada. Crickets on Andrew Shceer Friends and family plan, and week on the liberal back bencher who Trudeau did not control.