Covid-19: The Week That Could Determine The Fate of Canada 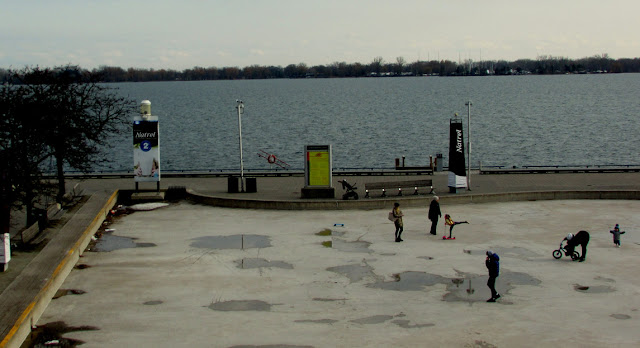 It's a bit bleak in my neighbourhood these days. The ice has gone from the rink, so now if you want to skate you've got to have wheels.

But I was still glad to be able to spend some time by the lake this weekend, feel the cool fresh wind in my face, give thanks that I'm still standing.

And prepare for the crucial week ahead. 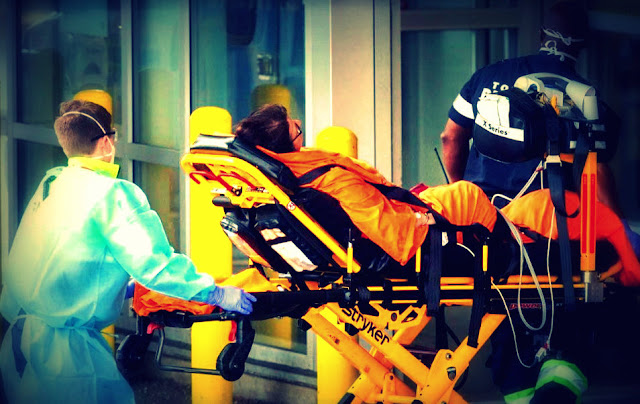 The one that should tell us whether we are winning or losing the war against Covid-19.

Canada's top doctor says this coming week will be a crucial time during which public health officials will start to see if the aggressive physical distancing measures taken to prevent the spread of the coronavirus are working.

Whether we are finally starting to flatten the curve, as some numbers suggest.

Or whether a surge of new cases will swamp our intensive care units, and take our health care system to the verge of collapse.

As is happening in New York City, where paramedics are being forced to make some heartbreaking choices.

Because of the volume, emergency medical workers are making life-or-death decisions about who is sick enough to take to crowded emergency rooms and who appears well enough to leave behind. They are assessing on scene which patients should receive time-consuming measures like CPR and intubation, and which patients are too far gone to save.

And so many are dying, some hospitals are being forced to store bodies in refrigerator trucks. 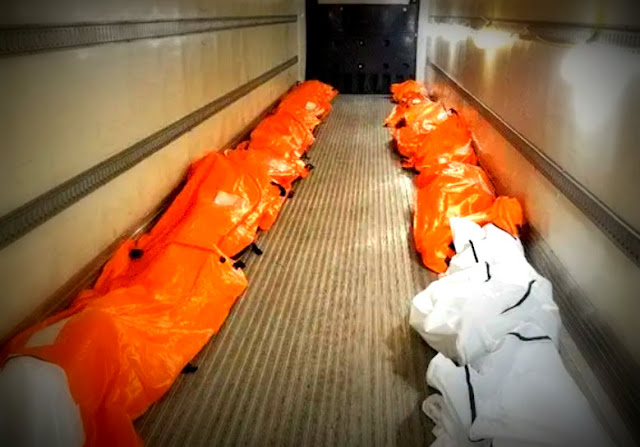 Or could this be our nightmare?

While the world’s attention now shifts to its own centers of contagion, the sirens keep sounding. Like the air raid sirens of the Second World War, they are the ambulance sirens that many survivors of this war will remember. They blare louder as they get closer, coming to collect the parents and grandparents, the keepers of Italy’s memory.

The grandchildren wave from terraces, and spouses sit back on the corners of now empty beds. And then the sirens start again, becoming fainter as the ambulances drive away toward hospitals crammed with coronavirus patients.

A place like Bergamo, where despite the heroic efforts of medical workers, death roams the corridors of overcrowded hospitals. 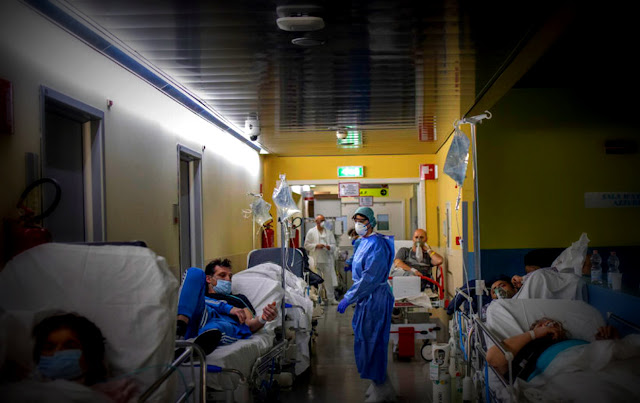 And the dead are so many the army must carry them away.

Italian policemen salute bodies of #coronavirus victims transferred from the besieged city of #Bergamo to be cremated elsewhere. This military honor is the only funeral they will get now and so it contains the sorrow and respect of an entire country. https://t.co/CuDjQGFCcI
— Gianni Riotta (@riotta) March 28, 2020

I have to admit that I have no idea what's going to happen in Canada.

I don't whether enough Canadians are acting responsibly, or whether many of them even understand that the fate of our health care system is in their hands.

What I do know is that our health care workers are among the best in the world. I know that they are risking their lives every single day to try to save the lives of others.

I know they deserve these kind of tributes.

The rain can’t stop the cheers in #Vancouver. Thanks to all the healthcare workers! 👏🏽#COVID19Vancouver #COVID19 pic.twitter.com/GNFk0XVgz8
— Karm Sumal (@KarmSumal) March 28, 2020


I also know that there are many other heroes who are also keeping this country from collapsing, but don't get the credit they deserve. 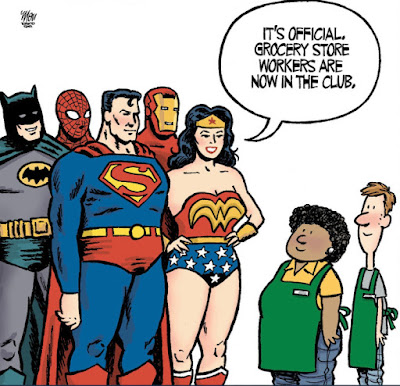 And because of all of them, and because I'm an optimist, I like to believe that we are winning.

I choose hope over despair.

So I'll leave you with these two twins quarantined in the darkness of northern Italy, playing Cold Play's Viva la Vida...

Stay healthy, stay home, and all together we will beat the bug...

Fuck me but I hope Trump doesn't try to reopen the border prematurely under threat of trade sanctions, and drag Canada into his vortex of mass death. That son of a bitch is going to kill people not just in America but all over the world, and then tweet about his ratings again. The Cons and their media sycophants pitching useless tantrums and spreading QAnon bullshit over the Internet about secret Chinese bioweapons, Liberal "power grabs," the "UN globalist carbon tax," the Trudeaus' relationship, or why Sophie and the kids are at Harrington Lake, doesn't help either. It only makes matters that much worse.

When all this is said and done, the W.H.O. needs to declare conservatism a threat to the public health. Good luck Canada, because you have a lot more than the virus itself to contend with. Scientists are working around the clock to find treatments and a vaccine for Covid-19, but as Einstein once pointed out, there's no cure for stupidity.

I believe many of the tens of thousands who will die soon from #COVID19 in the United States are the homeless, the street people, the addicted, the imprisoned, the illegal immigrants, the refugees, the labourers, the poor, the disabled.
And I believe there are some who are OK with this prospect.
I have never been more proud to be Canadian than I have been since this crisis began. Even Ford is rising to the occasion.
Someday I hope to read the story of how Trudeau did it, how he organized the government to put the right people in place to meet this crisis.

@ Cathie from Canada2:22 AM
Someday I hope to read the story of how Trudeau did it, how he organized the government to put the right people in place to meet this crisis.

I think that is not so much that Trudeau "organized the government to put the right people in place to meet this crisis" so much that, despite the Harper disaster, Canada managed to maintain its civil service in pretty good shape and the professional civil services in the provinces were in fairly good shape.


For example "On January 15, 2020, the Public Health Agency of Canada activated the Emergency Operation Centre to support Canada's response to COVID-19".

Even Kenny did not have enough time to gut the health and public services.

he Trudeau Gov't seems to have used its first term to rebuild the civil service, at least partially, so that he did not have to organize an ad-hoc team. It was there when he needed it.

What Trudeau has done is provide the leadership and backing to let his people do their job. He is willing to take expert advice and back them up. He also is, in general, is providing an image of a competent leader who is communicating honestly and pretty clearly.


The other place where he and his political team have shone is in the aid to people in financial distress. It may not be enough and it will be a bastard for the Gov't to deliver but compared to our cousins to the South we are doing well.

At the moment, Trudeau is like a gifted orchestra conductor leading a highly skilled set of musicians.

That was very thoughtful to include the grocery store workers cartoon, Simon. We all know the sacrifices our health care workers are making and I cant applaud them enough to show my appreciation. However, we cant forget the unsung heroes in our grocery stores and other establishments who remain open and at the ready to serve our needs. They are generally poorly paid and are putting themselves at risk, yet from what I've witnessed, they are going out of their way to help us and that is something I will never forget. May Godspeed their way for now and forever.
JD

Here's something pretty you might want to put on your site, the new Samuel-de-Champlain bridge illuminated in rainbow colours: https://ici.radio-canada.ca/nouvelle/1689577/pont-champlain-coronavirus-montreal

The polysemic rainbow that stands for LGBTQ+ liberation, PEACE (PACE) especially in Italy, Indigenous peoples (especially in South America) and many other positive concepts. There are children's rainbows throughout my neighbourhood and doubtless elsewhere.

Now many grocery store workers, and those at the SAQ, finally have plexiglas panels to protect them from people's coughs. Some people, especially a certain arrogant type, are extremely rude to store clerk. Grrr.

By the way, you need a Jair Bolsonaro in Covid-19 disguise to make it a matched set.

OT, but I didn't know yesterday was the anniversary of the famous "Thrilla on the Hilla". I should go watch the documentary again. Have to say, wow, has Patrick ever made a dramatic turnaround. He's funny, and even made a good-natured joke about him cutting his hair and Justin shaving the beard. (Wonder if we'll see the hippie locks return if, like the rest of us, he's stuck at home for awhile?)

Anyway, shame that his colleagues in the Senate like Linda, Leo and Waffles don't follow his lead. I'm not surprised to find out then, that he sits with the independents now, as the cons are incapable of introspection or even the bare minimum of civil behavior. Hope he's doing well.

Best comment on that thread: "I'll make a donation to the charity of your choice if you beat the s**t out of Andrew Scheer." Apparently Parliament is going to be recalled (again) for more drama and sabotage, so there's quite an opportunity for him yet... 🥊 🤼

After they finish off the Covid virus they can work on Trudeau derangement syndrome its sickening as well.