Why The Coronavirus Pandemic Could Destroy Donald Trump 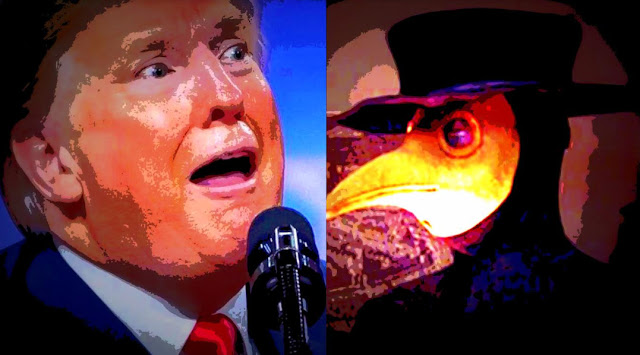 Donald Trump has always been a lousy president, a corrupt vulgar man who has debased himself and his country over and over again.

He has failed his country in its hour of need. Never has dumb seemed so dangerous.

And this is nothing less than attempted genocide.

For with COVID-19 exploding all over the United States

Relaxing the battle against the virus could kill as many as two million Americans.

As well as almost certainly finishing off Trump.

The con man and the loser... 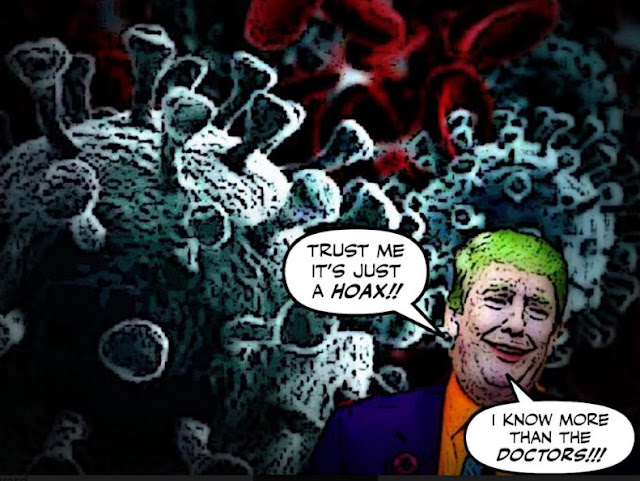 For as Chris Hayes points out, trying to rescue the economy from the grip of a pandemic makes absolutely no sense.

Just think of the economics of this: if you stopped lockdowns, and sent everyone back to work, lots and lots of people would get sick,” he writes. “You’d have workplaces where half the staff were out. And this would roll through all kinds of places, people who maintain the electrical grid, and water treatment and sewage systems, etc… Not only that, as the hospitals filled up and horror stories emerged, you’d have tons of deaths from things other than COVID-19 that couldn’t get treated.

“In fact, you risk ending up with the worst of both worlds: mass death and sickness AND ALSO an economy that’s essentially shut down.”

Trump's journey to disaster is a long one and well documented...


And not only does Trump's plan to abandon the fight against COVID-19 make no sense, the timing couldn't be worse.

The United States has the potential to become the new epicenter of the coronavirus pandemic due to a “very large acceleration” in infections there, the World Health Organization said on Tuesday. 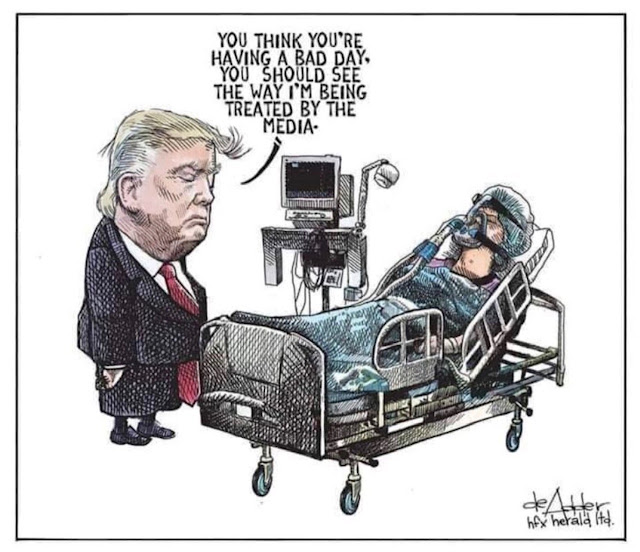 It's simply beyond belief. Nothing less than the planned mass murder of the old and the vulnerable.

Courtesy of a grubby, mentally dilapidated, billionaire president, who cares more about his money than he cares about his own people. 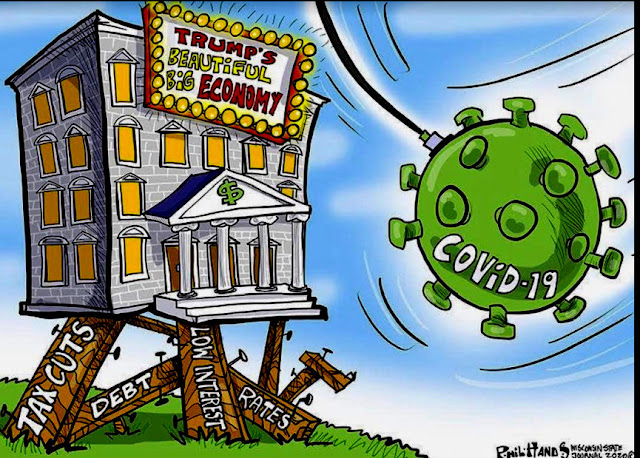 Because money is ALL he cares about, and this must be driving him crazy.

It's depressing, but the good news is that the pandemic has exposed Trump's inner beast. His total lack of humanity.

And he will pay for that...

Trump was able to get away with being a grifter, a serial liar, a pussy grabber, and a thousand other vile things.

But failing to protect his own people from COVID-19 is the ultimate crime.

And I'm pretty sure it will be what finally destroys him...

Scott Reid thinks all of this is fine because "parliamentary procedure".

He should go hang out at the gym and the pool with Rand Paul.

Last poll I saw Trump gaining in popularity. And Joe Biden sitting it all out (unless I've missed something in a couple of days?) is going to be very good for the Psycho in Chief. Still, hope you're right, Simon!!

if the cons stall this bill they will be reduced to zero in the next election.

On Trump I kinda half to agree, the same way GWB spoke the truth when he said in history we are all dead. You cant fight mother nature, mother nature is angry and she demands sacrifice. We can mitigate as best as possible but there is still going to be death on a massive scale. I just wish on climate change we had the same acknowledgement from the hard right. Hey I am over 60 and have a son with Type 1, this is a very bad time for my family. However, I dont think humans can stop mother nature when she is raging.

Reminds me of the lyrics "You always hurt the ones you love". With uncaring haste Trump is zeroing in on his aged supporters in Florida. Its unlikely there will be enough respirators or Darwin Awards to go around unless Karma has a surprise in store. https://www.macleans.ca/society/life/escape-from-florida-my-2400-km-drive-back-to-the-sanity-of-canada/

The Liberals caved. Fuck. I mean, they put the emergency ahead of politics which is good, but I'm literally crying right now because the garbage DipperCons are going to claim "victory" or "owning the libs" and never let up on it.

I hope Scheer, Singh, Skippy and Scott end up quarantined. I hate them that much and I'm not even sorry. I really, viscerally hate them as much as I do Trump. And I hate everyone who voted for them too.

Right Steve, and many more "progressive" centrist names to add to that list. We can blame reactionary health cultists on the right all we want, but the danger of "centrists" like these is that they give the right the cover of legitimacy to keep corporatizing and thus destroying the world as we know it.

I think that the stock market is more "real" to a lot of wealthy people, especially in the US than the masses, who besides are PoC or have funny accents.

A total lack of empathy; Trump is just the exemplar. I have read that the commandant of Auschwitz was a charming and devoted family man.

Re 'Getting America Back To Work by Easter Sunday, April 12
ie the hallucinations of Donald Trump (Supreme Scientist) and his GOP evangelically blessed Droog Cabal in the holy pulpit of Stock Market Grifters.

Yes - Yes they snout !! Let's get America back to Work as the USA approaches Peak Infection and Mortality (Death) and becoming the Epicenter of Global Covid 19 transmission. Brilliant ! The pinnacle, nay the Heavenly Rapture Ascension of Trump Brand diseased logic is ensuring the front line Healthcare Professionals and Volunteers, Firefighters, Paramedics etc are infected, overwhelmed.. many of whom will die

Donald Trump et al golfing one single day, or one weekend holidaying will sink his ship. I do think he is that stupid.. even his family doing so, Ivanka, Jared, Donald Jr, Eric will be the signal for vast numbers to abandon his rotted ship of fools sailing currently under the holy flag of Greed

Almost completely Off Topic but a great cartoon on Covid-19 and why the "Oh , it's just like the flu" is crap.

It is in French but le pharmachien has a parallel English stream so it may show up there too.

I wish you wouldn't get upset as you do, Jackie. The amended bill passed and the money can now flow. If the tables were turned, the Libs would most certainly not allow the Cons to do what they were trying to do. No one(Con base excluded) gives a shit what the Cons claim but they will remember the Libs didn't drag this out.
JD

Herr Harper was a strong leader, Justin Trudeau is an authoritarion.

Hate is self destructive and not very productive. What I love about this site is that Simon cartoonifies these people as individuals with not only a personal quirk but also with a much larger stinking collective albatross around their necks. Its perhaps more difficult to create the picture in written form without the sketches but give it a try. They are not worthy of hate but verbal cartoonification, extrapolation, scorn, satire, mockery is on the table. Most of these individuals are deeply flawed in at least one human dimension and have embraced the reflective collective as justification.

Can someone who speaks French please translate this audio for me? At 10:28 in the CPAC presser from Monday. Is Sophie's dad sick? My French is not so good, I heard Justin say happy birthday/joyeux anniversaire (sixty-something?) to Mr. Gregoire and that he was sorry they could not be with him, but did I also hear him say he has cancer??? Oh no, I hope not! That's horrible, especially right as Sophie has now gotten better! 😥 😰

For a measly three months rather than until September, as the Bloc reasonably negotiated, and they have to keep grovelling before the Cons at useless committees for "administrative review" just to humiliate them for "spending the cupboard bare." They even made it 90 days exactly and a stupid odd date of June 23 rather than September (or even June) 30, because they're such sticklers for punctuality. What the hell is "taxpayer's rights" besides Con austerity language about gripping the purse strings with white knuckles? Fine to waste taxpayer money on committees and flying Scheer back and forth to his mansion, but not on helping people? I am still angry and still hate them because they're playing games with people's lives. They violated confidentiality with that leak to stir up shit in the first place, and create distrust and bad press for Trudeau right when the polls were turning in his favor. The fuck part of "rough draft" don't they get? They could have discussed this privately, but they chose to create a PR blitz and delay the passage when every moment counts, just so they could pat themselves on the back for "stopping a power grab"? They can go to hell. People are dying and they want to fundraise off performative outrage and dunking on Trudeau. They deserve to choke on a ventilator.

I hope voters remember this bullshit at election time and I hope that time comes sooner rather than later so he can get his majority back and not have to listen to them at all. They could have done the adult thing and spoken quietly to the relevant ministers without tattle-tale whining to Bob Fife, but they opted instead to showboat and wrap themselves in the flag and feign concern for "democracy." Since when is the party of illegal proroguing, contempt of parliament, and the Senate expenses scandal that sent however many Harperites to jail concerned about "power grabs" and "unruly spending"??? Only when it's a Liberal named Trudeau? Nobody saw through this grandstanding besides the Bloc and they were disgusted. I have no idea for certain if there's a deity in the beyond but all I can say is thank God for Yves-Francois Blanchet!

Jackie, I answered your question at the more recent post

Yes, unfortunately Mr Grégoire is undergoing cancer treatment. Hard on him and his wife; and of course on Sophie who can't see her parents. I go into somewhat more detail on Simon's more recent post.

Yes, a Tunisian who was a torture survivor under Ben Ali's reign told me that the jailers shipping him to another prison were discussing their concerns about their children's school marks...