John Horgan, Christy Clark, and the Liberation of British Columbia 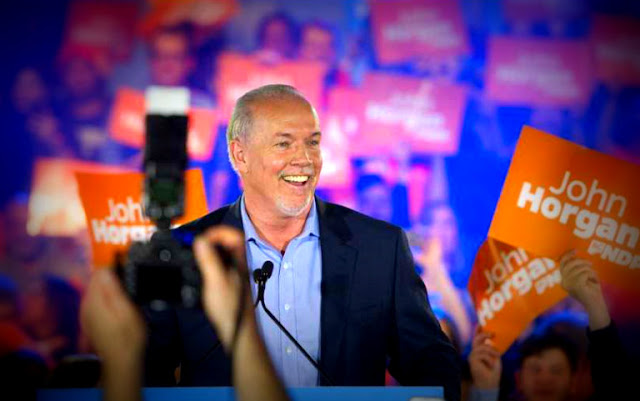 I'm really glad to see that British Columbia is finally going to get an NDP government.

And that John Horgan is going to become the new premier of that province.

After finally managing to get Christy Clark to stop clinging to power. 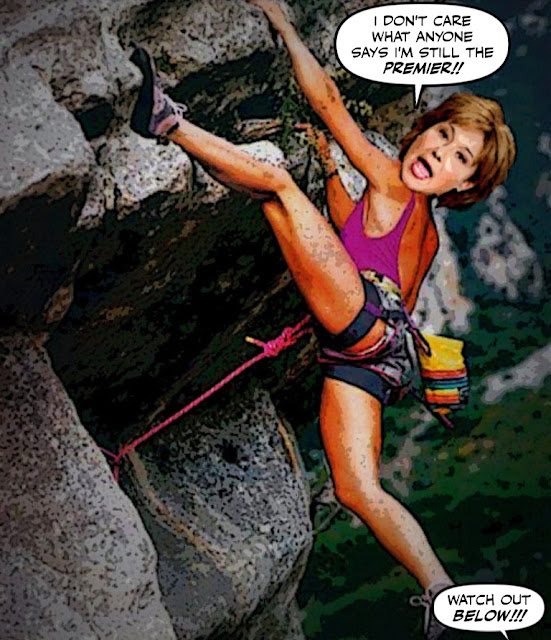 in a most shameful manner.

And while the Con media is gleefully predicting a hard fight ahead and claiming that the battle for BC has just begun.

As British Columbia’s New Democrats prepare to assume power, premier-designate John Horgan must navigate a dangerous path as he seeks to reshape the province.

And it's true that Horgan and his Green partner Andrew Weaver will face significant challenges, including a possible shootout with the NDP government in Alberta... 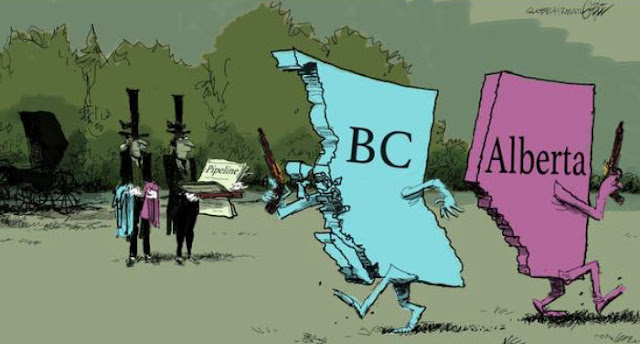 And the Liberal government in Ottawa.

I think both leaders have a great chance to show that progressive parties can work together.

Mr. Horgan acknowledged in an interview that this is not really how he envisioned the job of premier: He will need to negotiate with another political party every step of the way. “It’s not how you write it up on the white board,” he said. But, he added, now he has an “extraordinary opportunity” to try something different, where MLAs on both sides will be asked to work together to develop policy and legislation.

And set an example for other political parties in Canada.

And it's not like Christy Clark doesn't have her own problems after masquerading as a progressive. 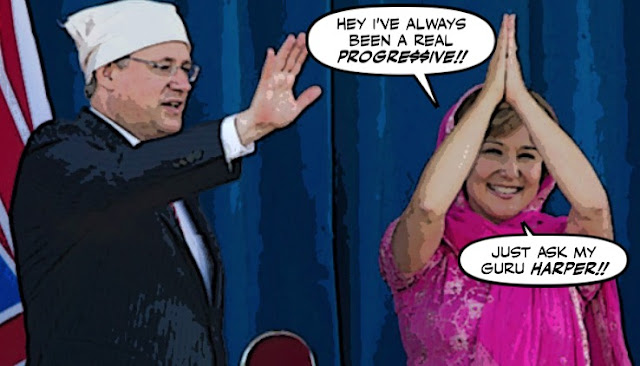 Former B.C. Liberal cabinet ministers reacted with shock — and worry that the party’s free-enterprise coalition could be at risk — at the abrupt policy turnarounds outlined in Premier Christy Clark’s throne speech Thursday.

Clark’s government — which campaigned on job creation and fiscally prudent government — borrowed heavily for the throne speech from the NDP and Green platforms, promising to roll out a $1-billion daycare program, to ban union and corporate donations to political parties, to increase welfare payments and to create a separate ministry for mental health and addiction.

In total, there were more than two dozen policy reversals and new policies not in the Liberals’ election platform.

And should in my opinion have been charged with electoral fraud.

So I just want to congratulate my friends and my many readers in beautiful British Columbia.

For having finally liberated their province from the corrupt grip of the Con Liberals, after sixteen long years.

And suggest that they don't need Canada Day as an excuse to party.

Their party starts right now, but hopefully will continue for a long long time. 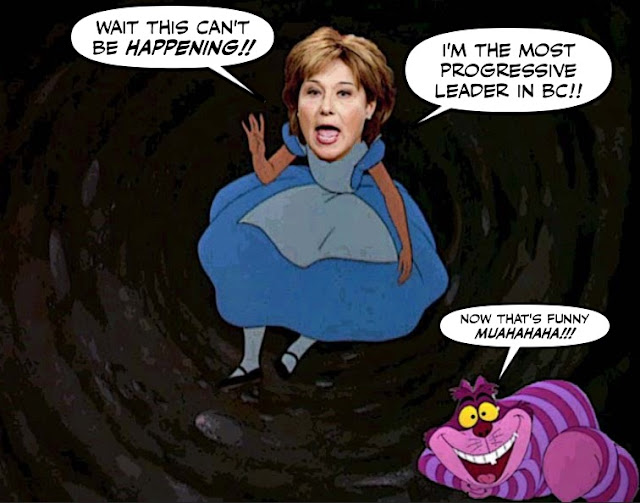 One set of Liberals defeated by the NDP in BC, another to go in Ottawa.

It was indeed a site to behold to watch the self-absorbed smily-bully fall this week. I truly despise Clark and to have her out of the public eye will be wonderful to say the least. She was truly desperate at the 11th hour and made an absolute fool of herself. The media will indeed make it hard for the new government and can expect to be criticized every step while Clark and her harper coalition got a free pass on every single blunder. Still no in depth analysis of the shambles that is BC Hydro and ICBC but once the harper-clark patronage appointments end, that may change. Indeed a breath of fresh air and may they last the full four years and beyond and couldn't happen at a better time so close to Canada day. Next up will be getting rid of Clark as the local MLA here in my riding of West Kelowna, but predictably another harper flunky will win.

It's not quite the Communist Party of Canada but we're getting closer and closer aren't we comrades?

Yeah who needs a functioning economy?

Simon, I completely agree with bcwaterby's comments. The Campbell/Clark regime were the most deceitful, unethical government in the history of British Columbia. These deviants were very comfortable lying, cheating, and stealing from the public purse without a whim of conscience. The idea of Communism is totally absurd. That kind of response is ill-informed rhetoric from the greedy bastards that have cheated British Colombians from their public assets for nearly 50 years.

hi Gyor...As I'm sure you know, the BC Liberals are actually like the Cons in Ottawa. So any party that can beat them has my vote... ;)

hi bcwaterboy...I'm sure it must be a great relief and a great reason to party seeing Crusty Christy finally go down the memory hole. Her attempt to cling to power was absolutely outrageous. As I said in my post the NDP and the Greens have a great chance to show that progressives can work together. And they will have to be smart because you can be sure that it won't be long before the Con media starts demanding another election...

hi anon...don't be ridiculous. The NDP is a democratic and decent Canadian party, and just as legitimate as any of the others...

hi anon...I don'y understand that question. Haven't Clark and her Liberals endorsed or stolen the NDP platform? And who needs widespread corruption?

hi anon...yes, even from where I live I could smell the stench of corruption. I'm glad BC voted for change, and I wish the NDP and the Greens all the luck in the world...

There is nothing about the B.C. Lieberals that remotely resembles the federal Liberals except the name and Markie, Christy's ex. B.C. Lieberals are actually federal Conservatives. When the Alberta and federal Cons lost their elections they came to work for the photo op queen, Christy clark. if anyone noticed there was a real similarity between her and the federal con ads.

Prior to the election there was no mention of any social program improvements, following the elections, the budget was full of them including a $100 raise for those on social assistance. the first raise in 9 years. whoppie. Rents run a thousand a month in Victoria for a small apartment. Vancouver is even higher.

Good riddance to the meanest premier this province has ever had. now lets watch the fun with the B.C. Lieberals as they try to "divest" themselves of Christy.

In response to who needs a functioning economy? B.C. does, that is why so many voted NDP and Green. Although after the election de Jong announced we had a couple of billion in surplus he failed to mention the $160 BILLION B.C. is in debt to mostly via B.C. Hydro which the B.C. Lieberals used as a cash cow to take money from, charge money to, reward their friends.

Starting with el gordo the IPPs sold power to B.C. Hydro for 10 cents a KWH and then they had to sell it to consumers for 3 cents. that's great business.

The Golden Ear and Port Mann bridges with their tolls sucked hundreds of millions out of the economy. Many people refused to pay or couldn't afford to so they took non tolled bridges. The deficits the bridges ran up so high the B.C. government will have to bail them out.

Then there is the not so small matter of all those BILLIONS missing from the B.C. Hydro pension fund.

The economy in B.C. is being driven by the real estate/construction market. If it weren't for that, we'd look something like Alberta with a failed oil economy.

over 63 thousand homes sit empty in Vancouver while people live on the streets, tents and shelters. One in five children live below the poverty line. None of this spells a successful economy. Wages are stagnant and have been for 30 years. At least Alberta had high wages while they had the oil boom. We never had anything. Mills are closed, raw logs are shipped off shore.

At least with an NDP government we might get clean hospitals again and kids might get a decent education if they're in public school.

Canada Day was great this year in B.C. We got a new government. One that didn't look like some graft and corruption outfit from Malyasia.