Stephen Harper and the Elephant Man 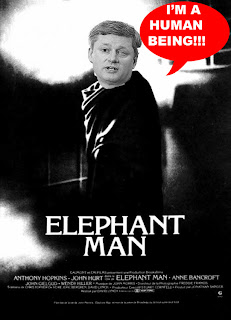 Like most decent Canadians when I first read Stephen Taylor's smarmy and cowardly attack on Stephane Dion's family, I was revolted.

But then I was amused. It's obviously just the latest campaign by that tool of the PMO to portray Great Fat Leader as a human being...and an ordinary Canadian. Which of course is laughable.

But then it was no coincidence that the Tory Tool published his absurd post on the same day that this poll came out.

Muahahaha! The Tory No-Brain trust must be desperate. The writing is on the wall. Canadians viscerally distrust and despise Stephen Harper so much he's falling apart like a wet paper bag. And dragging the Cons down with him. So the the panic is on to try to remake Harper's image. But since you can't put lipstick on an elephant man....they've resorted to attacking Dion. Again.

As a Quebecer I'm not a supporter of the wacky professor. But I can tell you one thing... Stephane Dion is a far more decent human being and better Canadian than Stephen Harper can ever hope to be. Or like the yankee stooge monster he is... would probably ever WANT to be.

But let's examine the evidence. And you be da judge...

HOW MUCH OF AN ORDINARY CANADIAN IS A MAN WHO:

(1) Was raised in the sinister Calgary School, and has spent most of his adult life as a nerdy policy wonk for right-wing freakazoid organizations like the Fraser Institute, the National Citizens Coalition, and the Reform Party. Right. You can't be an ordinary Canadian unless you've gone to neocon school. Like you couldn't be a Good German unless you joined the Hitler Youth.

(2) Is a secret religious fanatic who belongs to a weird sect known for its rabid missionary zeal, talking in tongues, and faith healing. And for its crazed beliefs that daddy knows best, gay people are evil, abortion is murder, and the end of the world is imminent. Oh yes that's a really ordinary sight in Canada. Gazillions of Canadians on their knees everywhere mumbling "Jebesus Jebesus" and looking up at the sky. Or is that Alabama?

(3) Pretends he's a family man but uses his children as props in a most disgusting way. He flies his kid to a hockey game but not before he tells the media he'll be there so the little prop can't enjoy the game because he's got so many cameras shoved in his face. Or when he drops his children off at school he shakes their hand instead of hugging them. What kind of a Canadian dad would sacrifice his kids for a photo-op?

(4) Speaks in a strange and creepy monotone voice, which coupled with his obvious inability to show any empathy, is characteristic of a clinical psychopath.

Imagine - if you can - not having a conscience, none at all, no feelings of guilt or remorse no matter what you do, no limiting sense of concern for the well-being of strangers, friends, or even family members. Imagine no struggles with shame, not a single one in your whole life, no matter what kind of selfish, lazy, harmful, or immoral action you had taken.

And pretend that the concept of responsibility is unknown to you, except as a burden others seem to accept without question, like gullible fools.

Sound familiar? And you thought Stephen Harper doesn't ever admit he is wrong because he doesn't WANT to.

Believe me I've known a lot of psychopaths and that's how they talk. They can be very successful...or pitiless killers...but nothing can hide the deadness inside.... 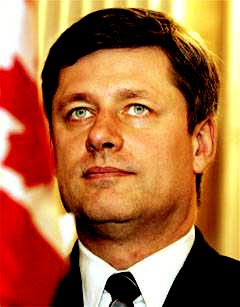 (5) Is a demented control freak who tries to muzzle everyone around him. And lies ALL the time. A man who believes he OWNS the truth. And when he's told he doesn't...like Preston Manning told him years ago...sulked and stamped his feet like a crybaby...had a kind of nervous breakdown...and became a born again religious fanatic.Scary. But really ordinary...

(6) Lets another man...the screamer pitbull bitch John Baird ...act as his eunuch and his wife's consort...and take her out on the town. Oh yeah... I'm sure "ordinary" Canadian married men do that all the time. I happen to believe that Mrs Harper is a pretty cool woman...just like Mrs Dion. But how many ordinary Canadians have GAY men take their wives out?

(7) Never travels anywhere without his personal psychic and makeup artist.... 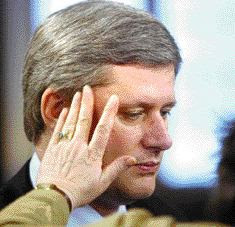 So she can put on his mascara and smear pancake makeup all over his porky features...while comunicating with the dead. Oh yeah that's REALLY ordinary. First we guys line up at the bar...and then we line up at the beauty parlour to get our fortunes told. Huh? Wot?

(8) Hates Canada and its beautiful values with a passion... and wants to turn it into Ugly Amerika. And doesn't care if Canadian soldiers die for nothing. As long as he can blow George Bush and sell our country out. Yup that's what ordinary Canadians talk about over their Timbits. How to fuck Canada and become a Mini-me Amerika. Brilliant.

Or don't make me laugh.... Stephen Harper is about as ordinary and as Canadian as a three dollar yankee bill. He's nothing more than a neocon monster, a liar, a divider, and a psychopath who has turned our Parliament into a septic tank. And the political process into a sewer.

Good luck with remaking THAT image. Canadians aren't THAT stupid. They know a freaky fraud when they see one.

And when the time comes to choose between Stephen Harper's ordinary...and ANY OTHER political leader.... I'm pretty confident they'll vote for better than ordinary.

Choose Canada rather than the United States.

That was GREAT! Thanks!

I think he has backbone alright, but that he got it by ripping out Canada's.

i wonder how much it cost the taxpayers for steve to have the 'i am ordinary' chip implant?

Hi Wendy!! Thanks. But you know helping to expose Harper as the mean spirited fanatic he is...is always a pleasure :)

Hi jay!! yeah I've heard that too. But what it really amounts too is an inability to admit he's ever wrong...which of course is extremely alarming in a political leader. But you're right about ripping the backbone out of Canada. That's exactly what he wants to do...destroy our institutions and our values so he can deliver us on a plate to the Americans. Unfortunately for him it won't work...:)

Hey Scout!! Those chips don't come cheap. But I understand the chip came as part of a package with the psychic/makeup artist so at least we saved something.But it's going to take billions to try to turn Harper into anything resembling a human being. So the sooner we get rid of this Frankenstein the better...he's just TOO scary!! :)