Afghanistan and the Enemy Within 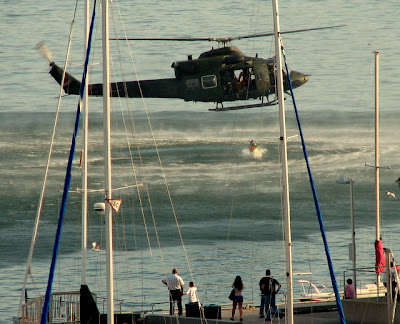 I was helping a friend with his yacht the other day.... when along came this little army chopper and put on quite a show in front of me. Dropping a frogman into the water, and then coming back to pick him up.

I was quite impressed. Until I realized that it was probably just part of General Rick "Kurtz" Hillier's new propaganda offensive to win over the home front. By taking the army to the people. To try to build up support for our doomed mission in Afghanistan.

I got a chopper. The kiddies got a tank.

But then the military is everywhere these days. The Van Doos are being sent to cities all over Quebec, and even a CFL game...before they go to Afghanistan in August. Wherever young Canadians gather these days the Forces are sure to go. There were so many troops at the CNE last year looking for new recruits, I'm surprised we didn't lose the war.

So I can't really understand what this blogger is so steamed about.

Not content to pollute the public discourse with their shameful distortions of the Afghan mission and the CF's part in helping that heretofore forsaken country rebuild itself, they've decided that intruding upon the lives of the soldiers involved and that of their families - and not of the politicians who decide what missions the CF takes on, mind you - is the most productive use of their time that day. So they're scheduling "une marche pacifique" - riiiight, let's see how that turns out - for the same day.

Like our soldiers and their families don't have enough stress to deal with as their deployment date approaches, without worrying about a confrontation with a bunch of uninformed, loudmouthed, belligerent nut-jobs on the streets of Quebec City. Asshats...

First of all if you can read French the peace activists make it clear that it will be a peaceful march and that it WON'T interfere with the parade.

As for the fuss over the letter campaign well that's as ridiculous as the mass mailing itself.

But Canadians who don't support the war in Afghanistan have every right to be heard. ... along with those who do. Because in the end THEY all get to decide whether the mission is a good one or a bad one or a hopeless one. And whether it's doing Canada more harm than good. Not the generals or the soldiers.

And the right-wing chickenhawks have no right to call Canadians who disagree with them traitors. Or the enemy within...

Or frame our teeny weeny hunt and kill mission as a grandiose crusade to save the world from terrorists....or even save little girls....

Give me a break. This is Afghanistan the barbarous and corrupt Islamic Republic we're talking about....... NOT the fucking Second World War!!!!!

You know ASSGHANISTAN....where little girls get taken out of school by their parents at the age of twelve. Where young women are jailed for running away from their 80-year-old husbands. Or burn themselves alive rather than suffer that fate.

Or are forced to marry three-year-old boys. 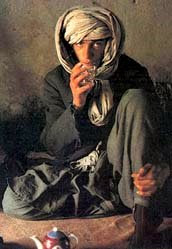 And prisoners are tortured or murdered. Is that ever going to change? No. So what the fuck are we doing there?

But then this mission was never about the Afghan people. Or reconstruction. Or if it once was it isn't anymore. It's just a way to keep NATO on life support now that the Cold War is over, please George Bush, bloody our troops, and militarize our culture to make us more like the Amerikans.

Stephen Harper and his Cons are a far greater threat to Canada as we know it than the ignorant Taliban barbarians are now or ever will be. They are the real enemy within....

As for the soldiers .....if they don't want Canadians to call them Harper's Army...or Chimp Bush's little bananas..... they should get off their high horses....and stop treating their countrymen like traitors. Or when Harper gets planted face first in the garbage can of history their little army might get even smaller.

They'll be lucky if there are enough soldiers left to guard the Governor General and fight forest fires.

Coz we need an army that considers Canadians THE ENEMY like we need a hole in the head. And at the going down of this yankee-loving traitor government WE WILL REMEMBER... 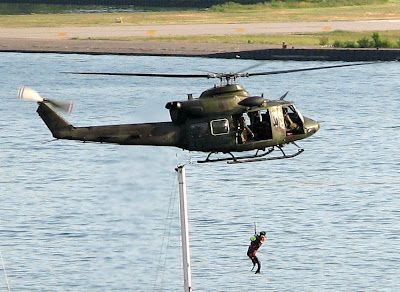 But who will rescue Canada...and our army.... from these chickenhawk Cons?