The Dead Gay Boy and the Blogging Bigots 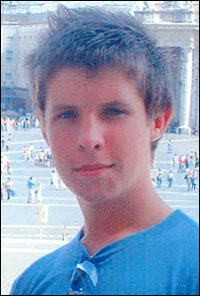 I was thinking about this poor kid the other day who laid down in front of a train after being bullied because he was gay.

“Tell everyone that this is for anybody who eva said anything bad about me, see I do have feelings too. Blame the people who were horrible and injust 2 me. This is because of them, I am human just like them.

And then I read this ugly post. And you can imagine how angry I felt...

You will notice that this foul homophobic bigot tried to delete her post. And blame it on others. What a coward.

But luckily not before two great bloggers Canadian Cynic and Red Tory took her apart. Boy did they ever...

But as a gay guy I'm not surprised. The bigot was just following the party line...all the way down from the Nazi Pope. Once she and her fellow religious bigots pretended that they were only against gay marriage. But now the masks have fallen off.

Now it's all about attacking us for who we are. Dehumanizing and insulting gay people....making it sound like we're all about sex and not about love. Whipping up hatred against us so that others can attack us and kill us.

Just like the racists in the United States used to accuse black men of spreading syphilis...so they could deny them their rights...and have fun lynching them. 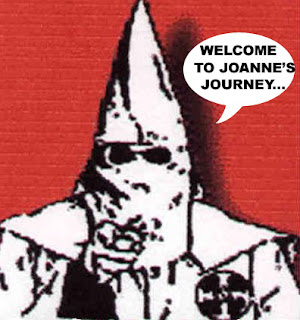 It's the same murderous bigotry...and the same enemy at work.There are so many blogging bigots at the Blogging Tories it should be renamed the Klan Chronicles.

Because you don't need a rope or a gun to kill. Hatred sometimes leaves no visible wounds. But it can be just as deadly.

First you attack a group of humans for who they are. You make their lives hell. You fill them full of fear and self loathing. You bully them, you beat them, you kill them. And then when some of them can't take it, or become self destructive in their despair, or kill themselves. You say look gays die sooner than us. And you blame it on who they are.

Could ANYTHING be more cruel and inhuman than that? Are these homophobes monsters or what?

But of course it's all a sign of desperation. The crazy hatemongers are on the run. Our fight for a kinder, gentler and more loving world for gays AND straights, and women and kids, and all persecuted groups continues to gain ground. Not just here but all over the world. 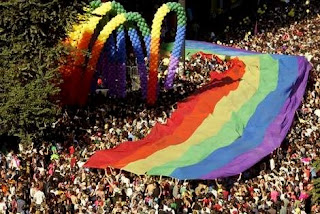 In one city in Brazil the other day about three million people took part in the Gay Pride Parade.

Which is three times what the Nazi Pope got with his message of hate...

On a five-day visit to Brazil, the world's most populous Catholic country, Pope Benedict attracted less than 1 million to listen to his calls to reinforce traditional family values.

Isn't that great? Talk about a slap in the face.That's why these bigots hate us so much.

And the BEST thing is soon we'll be marching in our OWN Pride Day parades all across Canada. And in the city where Joanne lives about a million people will take part in this one. 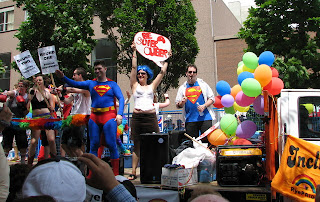 Gays and straights together standing up for diversity and against intolerance...in Canada's BIGGEST parade. Won't that make her bigotness shit herself? And hopefully drown in her own muck....

Because you see we won't just be there to show people we're queer, we've always been here, and we're not going away. Or just to party with ourselves and our straight friends and draw strength from each other. Or in my case hose down cute guys and stuffy dignitaries with my water gun....

We'll also be marching for all those around the world who can't march...and are condemned by religious hatemongers to live lives of fear. And all the gay kids who are being bullied to death in our schools. And for poor little Jonathan and all the many others who died too young of bigotry.

That's why we're not afraid of anything. 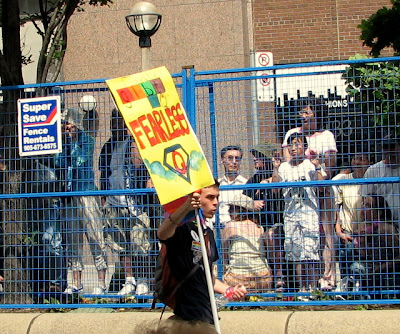 That's why we're going to bury these bigots.