The Guantanamo Kid and Canada's Shame 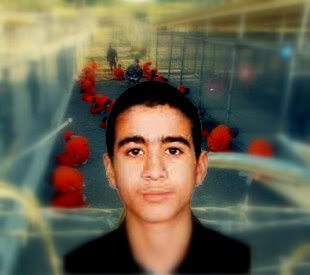 I suspect that if I ever met Omar Khadr, the Guantanamo Kid, it would probably only take about two minutes before I'd want to strangle him. Or at least slap him stoopid.. I hate religious fanatics that much.

But that didn't stop me from being REALLY happy to see the charges against him dropped.

Not just because no child should ever have gone through what he did. But also because he was a Canadian kid and we didn't do enough to stop this travesty of justice so the case is Canada's Shame.

He never should have been charged because he didn't kill as a terrorist. He killed in combat...

The American soldiers called in air support and laid siege to the compound, bombing and strafing it until it was flat and silent. They walked into the ruins. They had not gotten far when a wounded fighter, concealed behind a broken wall, threw a grenade, killing Special Forces Sgt. Christopher Speer. The soldiers immediately shot the fighter three times in the chest, and he collapsed.

When the soldiers got close, they saw that he was just a boy. Fifteen years old and slightly built, he could have passed for thirteen. He was bleeding heavily from his wounds, but he was -- unbelievably -- alive. The soldiers stood over him.

"Kill me," he murmured, in fluent English. "Please, just kill me."

He was just a child soldier....and they are ALWAYS victims of adults. In Omar's case his crazy Al Qaeda parents. Osama's little monkeys.

He should have been shipped home to Canada to be detained and treated in a juvenile facility until hopefully he was rehabilitated. He never should have been taken to a place like Guantanamo and treated like an animal instead of a badly wounded, and traumatized teenager.

Several medical experts have reviewed the results of two mental-status exams administered to Omar. All concurred in their interpretations. Dr. Eric Trupin, who has written extensively on the effects of incarceration on adolescents, concluded that Omar has been traumatized and tortured to a degree that is, in Trupin's considerable experience, remarkable.

Even though he was just a boy, has a body full of shrapnel and is blind in one eye...

You can read more about what the Guantanamo torturers did to Omar here.

And how our cowardly yankee stooge government didn't do enough to help him.

The Canadian government may not simply have neglected their responsibilities towards Omar Khadr. It may also have been complicit in his detention and ill-treatment.

I realize that he killed a brave medic. And I'm sorry about that.

I realize that he belongs to a crazy family. And just about EVERYONE in Canada hates them. Especially the wingnut mother...who should be in an insane asylum.

But the bottom line is that Omar Khadr, Canadian child soldier, was victimized first by his evil parents, then by Al Qaeda, then by the Americans, and finally by his own government. Which leads to an obvious question: What kind of Canadian government doesn't even try to stop a Canadian kid from being tortured? No matter how crazy or fucked up he may be.

And another one too: What kind of country would allow that to happen? Why didn't more Canadians kick up a fuss?

Then worry about Canada...