You know how I love racing cars....so when I heard that Stephen Harper's Cons were going to sponsor a racing team I was naturally intrigued. Only to almost shit myself laughing when I found out who they were actually sponsoring.

A Dodge Charger stock car driven by news whore Pierre Bourque....on the Canadian NASCAR circuit. OMFG how low can they go? First Stockwell Day and his Skidoo...now this amateur act.

The federal Conservative party is moving forward with a new strategy...by sponsoring a stock car in the NASCAR Canadian Tire Series, as it tries to win over the estimated one in five Canadians who counts himself or herself as a NASCAR fan.

"This is a great opportunity for them to get some facetime with a huge segment of the Canadian electorate," Bourque told CBC news on Monday. "It's a natural fit for them."

Oh please. Don't make me laugh. Somebody please let some hot air out of this guy's tires before he goes pop.....or pfffffft....

Many Canadians may be addicted to the American NASCAR circuit...or at least the television show....a wild and vulgar mix of yankee militarism, country singers, corn roasts, big boobs, drunk rednecks with confederate flags, and ugly souped up road cars.

But almost NOBODY follows the Canadian NASCAR circuit. It's so dinky and far down the racing ladder...it's the next step up from bumper cars. No serious racing fan would be caught dead at one of those bush league rumbles. To enjoy one of those rube races you'd have to be plastered on moonshine.

And.....alas for the Big Blue Con Car's sponsors..... despite Alberta's outstanding contribution....there just aren't THAT many rednecks in Canada... 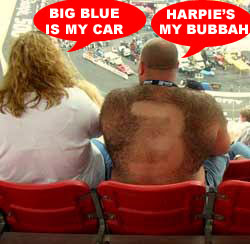 But of course....it's not even a Canadian idea. Just another American one.

The so-called NASCAR dad fully emerged as a targeted political constituency during the 2004 presidential race between President Bush and Sen. John Kerry, D-Mass. Political strategists heralded the primarily Southern voter as a conservative counterweight to the more liberal "soccer mom."

"If you blend it with the evangelicals, you pretty much have the White voting bloc, ages 21 to 55 and predominately male, though not exclusively ....And it is a potent voting force, especially among the Republicans."

But not in Canada... Great Fat Leader may have the evangelicals by the short and curlies...just like they have their voices in his head....but he still can't tell the difference between Americans and Canadians. He always forgets that what works there....usually doesn't work here. That's why we're still an independent country.

Just like these dum cons forgot one other thing...because of the rube nature of the NASCAR races... going round and round on small and dinky oval tracks...they have a nasty tendency to crash into each other.....on into concrete walls. 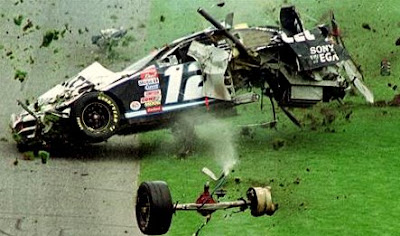 And what a way for Bourque to go. I take back all I said about this rube bumper car circuit....and the Big Blue Con Car. Vroom. Vroom. Go Bubbahs go!!

Don't be putting down NASCAR you pompus, snooty, jackass!

Careful Simon, NASCAR is a religion;)

Seriously though. I wonder if there's a big enough audience up here for Nascar. You never know... I know a few peeps that go to the stock car races (or whatever they're called) on the weekend (we have a track nearby). I could never get into car races myself, but I used to like classic motorcycle races. ("Classic" only! Harleys, trumps, nortons etc)

It'll be interesting to see how this flies. In any event, as you say, it's a splendid metaphor!

Hi anonymous! Ok ok...I was just having some fun. I am a snooty Formula One fan...and a jackass sometimes...but not a pompous one...And I didn't mean to put down all of NASCAR. It does have some real good drivers. I just wanted to take some of the air out of Pierre Bourque's ridiculous flackery...and the idea of Stephen Harper appealing to NASCAR dads...

Hi JJ!! As I explained to anonymous my real target was Harper..and the way he copies EVERYTHING Chimp Bush does. And I used to race motorbikes around a rube track near Sherbrooke so who the fuck am I to talk... :)