James Loney and the homophobes 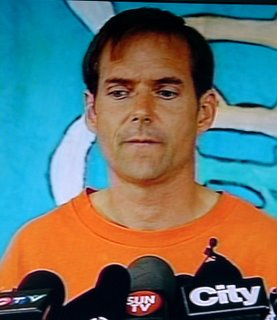 I've been thinking a lot about what it means to be gay in Canada these days. And I bet James Loney has too. But it's not just that story that bothers me. It's the comments.

And not just those vile ones. Comments like this one too. It's hard to believe you're in Canada when you read stuff like that. You'd think we were in Alabama or Zimbabwe.

If anyone thinks that homophobia isn't a big problem in Canada. Think again. The religious right's campaign of hatred against gays and lesbians is bearing its poisonous fruit. Just as I predicted.

What's wrong with these people? Who gave them the right to stick their dirty noses into our lives? Why do they hate us and talk about us so much?

Why do they give us the power to make an army shoot itself in the foot?

Or the power to divide churches? And force them to choose between hatred or love.

Are we supermen or batwomen or what?

I expect James Loney spends a lot more time thinking about those kinds of things than I do. He seems like that kind of guy. Decent and thoughtful and very brave. I don't think he's paranoid.

But maybe just a little naive.

He thought he had to go all the way to Iraq to meet religious wingnut bigots face to face. When they were right here in his own backyard. Our very own mouthbreathing homegrown homophobes. James spoke up, and risked his life for all kinds of causes except our own. Now he knows better.

His heart was in the right place, but a bit naive.These guys give dictators the world over, some satasifaction that their is always someone looking out for them, in the name of Peace.

As a gay man, I think he would be wise to steer clear of the Knights of the KKK. I believe he is absolutely right in his suspicions around the "liability" closure of this camp. The Knights of the KKK got wind of this and I'm sure they scrambled to not have the gay agenda spread at their camp and convert straight boys to gay as we all know that we are on a never ending recruiting mission. Although there are some guys at the local gym I would mind recruiting. Those comments were just vile and you're right Simon, homophobia is alive and well in Canada, the religious right makes sure of that.

Steve...don't be too hard on James. It takes a few gentle and even naive people like that to make us the civilized country we are. Although I hope that when he was in Iraq he tried to help Iraqi gays who are persecuted and murdered. And didn't just look the other way. You can be sure that if I ever bump into him that's the first thing I'll ask him!
Tim... I hope you're wrong about the closure of the camp. But sadly I don't think you are. The good Knights are a bunch of fanatic homophobes. What really bugs me is that the ones who have to pay for this bigotry are the poor kids. BTW keep up your recruiting efforts at the gym. We need every good man we can get :>)