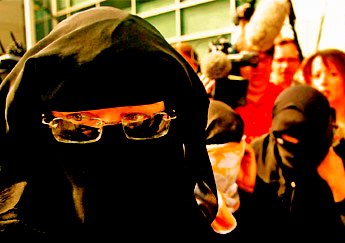 The one in the picture is Cheryfa Macaulay, the wife of the alleged spiritual leader of the alleged terrorist wannabes. She spends a lot of time trying to make life hard for gay kids, or children of gay parents in Toronto schools.

But her internet buddy Nada Farooq makes her look like a pork chop. Really puts her to shame. She's such a religious fanatic she wanted her husband to promise she'd get a divorce if he ever turned down a chance for Jihad. And as for gay Canadians? Well she wants them dead.

"Look at these pathetic people. They should all be sent to Saudi, where these sickos are executed or crushed by a wall, in public...."

Ouch. That sounds painful. And in public too. A Gay Execution Show. How nice. I bet they are really popular.

But wait....who's the real sicko here I wonder? Doesn't Nada (pronounced Needa) know that people like her are forbidden to throw stones in glass houses? They're supposed to wait until some poor woman accused of adultery by her piggy husband is buried up to her head in the sand. And then throw their rocks at her.(Warning: deeply disturbing description)

Glory be to Allah. Does Needa need or what? The kids were cruel to call her Needa Shower. But she sure stinks out the joint now.

But don't laugh, the really stinky part is that Nada and her friends are precisely the kind of religious extremists Stephen Harper has been trying to recruit in the new immigrant community.

By playing the anti-gay card among other things. To try to win himself a majority.

He knows that religious zealots in those communities hate gays and lesbians and our beautiful, progressive, tolerant Canadian values. Just like his Reform Cons do. He figures he can steal them away from the Liberals. That they are his natural allies.

That's the scary and shameful part, and the real threat to Canada as we know and love it.

As for Nada I suggest that she take her own advice and move to the terrorist breeding ground of Saudi Arabia. Oh I know the place is run by a bunch of corrupt super rich piggies that are about as Muslim as I am. But their schools turn out legions of young wannabe terrorists. So she should love it there.

Or is she afraid? Afraid she might end up as the opening act at the Gay Execution Show. Warming up the bloodthirsty mob. By losing her foul tongue to an executioner's sword.

Not for trash talking or threatening the gay people of Canada. That's worth about fifty bonus Wahhabi Wannabe Crazy Suicide Bomber Terrorist/Martyr points.

But for daring to suggest that a wife should tell her husband when to divorce her.

Hey I figure if Nada wants us all to live in the shadow of the hideous veil. She should be prepared to lead by example.

Or zip up her burqa and shut the fuck up.

Now who's going to save us from Stephen Harper and his religious wingnut base?

Who hate us and our country's values just as much as she does.

Ten thousand bonus I Love Canada As It Is Free, Secular, Tolerant and For Everyone points for anyone who comes up with the answer....

Can you lefties make up your mind, one minute Harper is persucuting these nice Muslims, next minute he is recruiting them.
Throwing Harper into every post, really devalues your arguements.
Plese grow up!!!!

So much for a little unity in the gay community eh Steve? Stupid question, but why are you such a big Harper fan anyway? Don't ya know the man and his cronies hate your guts and don't care if you are left right or centre, you're gay and they don't like you. Do a little research, the bad stuff is really easy to find, or if you'd like, I'll introduce you to Stockwell Day, he lives just south of me, he'll tell you you're going to hell.

So what if he hates my guts, what is he going to do about it???
So Stockwell will tell me I am going to hell, so. I know I am not.Do you think I am that stupid.
Anyway even the most extreme nutters in Harpers group have to work within the parliamentary framework, none of them are threatening suicide attacks, or plan ot blow up Parliament etc etc.
Lets put things in perspective here.
As far as unity in the gay community, are we not allowed diversity of opinion, or do we all have to follow the party line of Jack and his friends.
Gay rights are not much used if some leftie has fucked the economy up and we are all unemployed.

Actually, he (Harper) could do lots of things Steve, if given the opportunity, (and he will, he is financed heavily by Focus on the Family, you know, that group that says its not a hate group, but is a hate group).
Diversity of opinion is most certainly welcome but don't you think for once that our community might just unite instead of being all over the place the way it is? One of the biggest issues is urban vs rural. Most things in the gay community target the urbanite but tend to forget about we country bumpkins.:)
As far as political affiliations go, personally, I would never dream of supporting a politician, or party, or ideology, which viewed me as little more than pond scum. I'm not really interested in a left vs right view of the gay community, I think we sadly need some sort of cohesion. And it's not about marriage, its about our role and how we are viewed by and fit into, society. Any of these "debates" boil down to that. Why do you think backwardsass religious groups get their nylons in such a knot at the very mention of gays?
The economy can go in the sewer regardless of the inept politician, or political party just look south to the abominable GW Bush? There is one screwed up man!

Happy Canada Day from a leftie to a rightie.
Cheers.

You are never going to get cohesion,gays are no different from the rest of society.You may get tempory coalitions,for example when Harper sends the tanks down Church St.
How many gay friends do you think Martin or Chretien, had, at least Harper is honest.
More energy should be spent on local issues, such as helping gay youth adust to a very hostile urban environment.Yet everything is about "ME" and my rights to marry! or suck dick behind a bush.

Hi guys interesting discussion... Steve....when have I ever accused Harper of persecuting Muslims? The fact is he's trying to recruit newly arrived immigrants by playing on their anti-gay views. I find that intolerable. How dare somebody from some backward society get off the boat and tell me how to live my life.As for the left/right thing well I'm a leftie and that's not going to change. Although I don't blindly follow anyone.If left-wingers make jackasses out of themselves, like they sometimes do, then I criticize them too. I suppose it's theoretically possible that I could support a Red Tory, but I could never support Harper. He's way too far to the right of the Canadian Conservative tradition. I honestly believe he's not just a threat to gay people, he's a threat to the future of this country. I respect your views, but I just don't share them. As for Tim's point about the urban/rural divide I think it's a very good one. We should pay more attention to our gay country bumpkins.:)We are too urban fixated. But then I live with two of them so I figure I'm doing my part! Anyway....the bottom line is that gay people come in all shapes and sizes and have all kinds of political views. I think that's healthy and good. We just have to rise above them sometimes to support ourselves. If we don't who will?

Eh I would live with a farm boy anytime :)