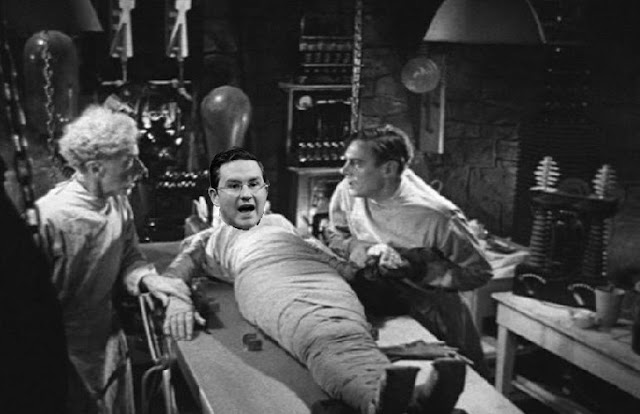 It's hard to know how desperate Pierre Poilievre must be after all the mistakes his sordid campaign has made recently.

But judging from the panicked state of his advisers, and the kooky videos he's putting out, he must finally have realized that he might win the Con leadership race, but he will never be Prime Minister.

For this video is truly desperate.

He pretends he is having breakfast with Justin Trudeau, blames him for everything, while sloshing his coffee around in a revolting manner, and talking with his mouth full.

But then so is this from his wife Anaida... 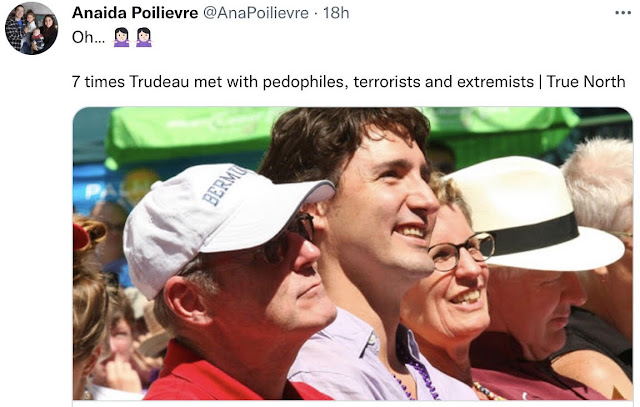 Can you believe that? She's all but accusing the Prime Minister of being a pedophile, in a depraved drive by smear that shocked most decent Canadians. 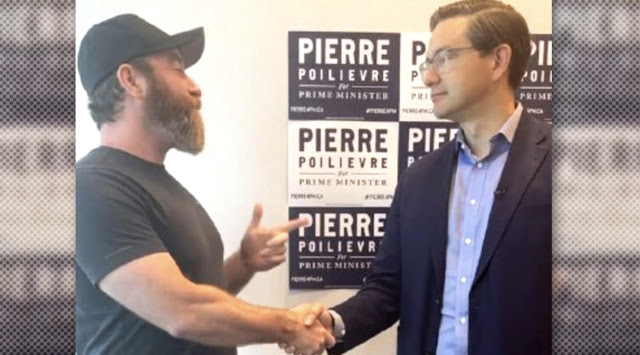 And try to make Canadians believe that Poilievre is not a wannabe terrorist sympathizer.

Which won't be easy considering the company MacKenzie keeps, with the Diagolon terrorist movement he founded. 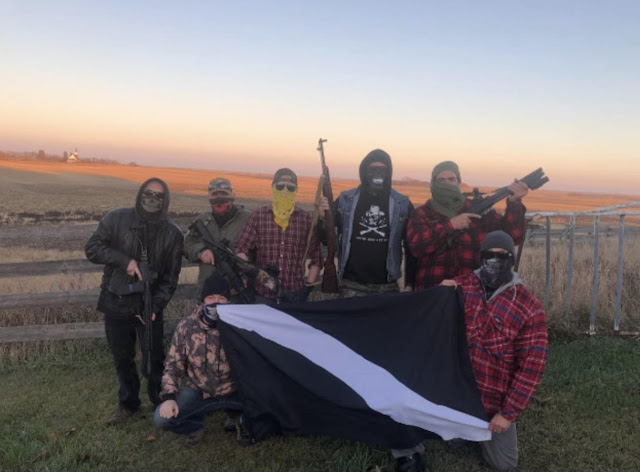 That's him on the left kneeling next to the terrorist flag.

Or the company Poilievre likes to keep... 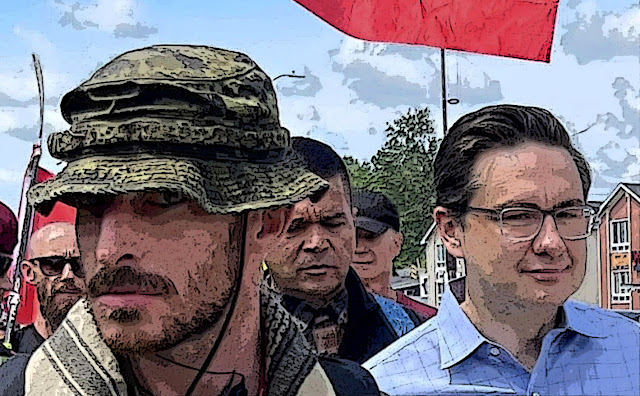 But beyond the far right extremists he likes to consort with, there is the question of the man himself.

The question of whether he looks and behaves like a Canadian Prime Minister should. 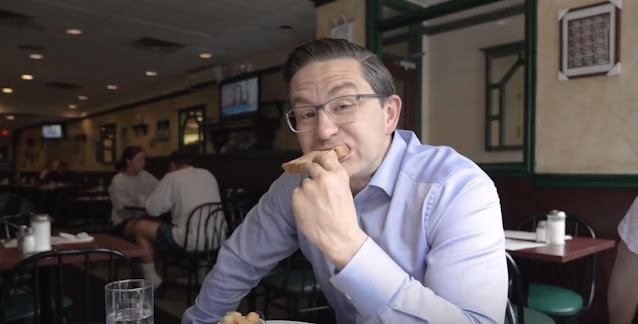 And whether him and his wife Anaida a.k.a La Bomba are fit to live in 24 Sussex Drive.

And surely the answer must be no, this country deserves better than trailer trash like them.

Who would stir up hatred against the Trudeau government, even if that means encouraging Con trailer trash to threaten and attack them.

“Chrystia! What the fuck are you doing in Alberta?!” A warm Alberta welcome for Chrystia Freeland. pic.twitter.com/H40J3hRcOE

And it looks like most Canadians agree, for if Poilievre and his Convoy Party were hoping his sleazy summer campaign would give them a boost in the polls, they must be very disappointed.

Poilievre may have captured the hearts and minds of hopeful Conservatives, but there is so far no indication his camp has grown the party base in regions where it desperately needs to grow.

For as Phillipe Fournier suggests, rather than inspiring Canadians, Poilievre's campaign may be turning them off.

It’s possible Poilievre’s toxicity to a large chunk of the electorate may be making the Conservatives even more unelectable to national voters. This would give the Liberals default popular support simply for serving as a last defense against a Poilievre-led government.

Which as Andrew Perez suggests, could be fatal for him and his Convoy Party.

The stakes could not be higher for today’s Conservative Party. It’s likely a Poilievre victory will reinvigorate Trudeau, potentially extending his political lifespan through one more election cycle. If Trudeau’s Liberals are able to defeat the CPC for a fourth consecutive time, the brutal electoral aftermath could send shockwaves through the CPC, fracturing it beyond repair.

And what more could we ask for?

Poilievre and La Bomba are helping to kill their own party.

While Justin Trudeau and his wife Sophie show us that manners and class still matter. How lucky we are.

So it’s was wrong for Pierre to shake hands with the leader of Diagolon Group, but you are absolutely silent on the issue of Laith Marouf who got tens-of-thousands of taxpayers dollars.

Hell, the minister was even warned by fellow Liberal MPs months ago about this guy.

Great, great comment.
And with Jeremy MacKenzie being arrested by the RCMP and Deputy PM Chrystia Freeland aggressively verbally attacked in Alberta, and with inflation likely receding to 3-4% by the time the 2025 inflation is called, the Conservatives will have nothing to run on. Their hope that the population of Canada will tire of Justin Trudeau and give CPC a majority is pure folly.

Of course, a lot can happen between now and 2025, but I wouldn't bet the house on a CPC majority, that's for sure. And since that's the only way the conservatives can win, it looks like end is near for the Harper party, once and for all...

Laith Marouf said atrocious things, but he wasn't part of a group seeking to overthrow the government. He slipped through the cracks and wasn't properly vetted, but was fired when his atrocious comments came to light. Whereas the CPC has made it the core of their brand to actively court and encourage vile scumbags like Jeremy MacKenzie, Pat King, and the lowlife chud who stalked Freeland. Just because that guy accosted Skippy too doesn't get him off the hook for welcoming these orcs into the big blue circus tent. And yet instead of condemning him, he's remained silent while Jenni blasts whataboutisms and makes the situation all about herself. Miss barbaric cultural practices deserves zero sympathy. This is the monster that she created.

The CPC will not get anywhere at trying to paint the Liberals as racists any more than they did with the fake Aladdin nontroversy. Not when they have an incredibly long (and "proud") record of wearing "deplorable" as a badge of honour. At least Trudeau's socks are fun, but Bergen's MAGA hat is the present-day equivalent of a white hood. Perhaps Anon 3:40 PM would care to expound upon why Lewis is lashing out her own fellow CPC MP (who is clearly in the wrong party) as a "racist"? Just because she's Black doesn't mean she has license to trivialize the Holocaust. This party all over is just a massive, massive fail.

The Crackhead Party of Canada can go crawl back into whatever incel chatroom they came from and rot there for all anybody cares. Donald and Melania Poilievre, meanwhile, for the vile QAnon smears they're spewing up, are more than deserving of a libel suit from the prime minister and his wife.

Clsssic whataboutism. Does a federal contractor condemning white supremacy in Israel mean we should ignore Poilievre's palling around with white supremacists in Canada? What's your point?!

So lets see with these twitter links. if we see trash like mostly the one where the two clowns chased Freeland, I guess it's because Elon Musk must have bought Twitter and so would encourage this sort of bullcrap. Hope it was clear.

Who knew that while PP is running to be PM, his wife, Kaka, would be running to replace the current "Queen of Canada". God I hope they win and ensure that the CPC is reduced to a fetid, rotting carcass devoid of anything but maggots.
JD

Hi anon@3:40PM....Please, spare me the whatabouterism. Thee is no comparison between Poilievre's terrorist infatuation and the crude anti-semitic tweets of Laith Marouf. Marouf is a loser who got fired end of story. But Poilievre's hairy honkers are trying to bring down the government and are a threat to us all. I realize that Con headquarters is trying to muddy the waters, but they will not get away with it....

Hi Pierre... Thanks, I'm glad you liked the post. And you're right, everything Poilievre touches is turning to shite. And the Con ape Elliot McDavid will be one of the final nails in his coffin. Jenni Byrne can try to give Poilievre's campaign, or Poilievre himself, mouth to mouth resuscitation, but nothing will save him. And that's even before we deploy the climate change weapon against him. I'm still confidently predicting that Poilievre will be the one who takes down the Harper Party...

Hi Jackie...Thanks for educating anon@3:40 PM. He has continued to send comments my way claiming that Marouf's tweets are as damaging as Poilievre's cuddling up to wannabe terrorists. But it's obvious where that Con ape man got his inspiration from, and all those Canadians who were disgusted by his bestial assault on Freeland will hold it against Poilievre, and his chances of becoming Prime Minister are even slimmer today than they already were. I'm hoping that Poilievre will need Leslyn Lewis' support to win the Con leadership, because the loonie way she has been behaving will be the cherry on the cake, and help take them all down...

HI anon@12:13...I personally believe that Elon Musk is an idiot, politically speaking at least. But even he would recognize that Poilievre' campaign is doomed....

Hi JD....Nice to hear from you. I hope your summer is going well, and that you will be well rested so you can enjoy the spectacle of Poilievre and his ghastly wife trying to portray themselves as the new King and Queen of Canada, or at least the trailer trash version of royalty. Expect to see lots of pictures of Poilievre, La Bomba, and their two kids in an attempt to soften Poilievre's ugly image. But it's now far too late for that, and will only make Poilievre look even more ridiculous...

Attention Conchellas….I’ve told you again and again that comparing an ugly tweet from a loser like Laith Marouf to the far-right racists who are trying to overthrow our government makes you idiots at best and terrorist sympathizers at worst. So needless to say I will delete any comments you send me. As I’ve also said before I know you are suffering, your scummy Pierre Poilievre is breaking apart in mid air. But your pain is my pleasure 🤣🤣🤣🤣🤣🤣🤣🤣