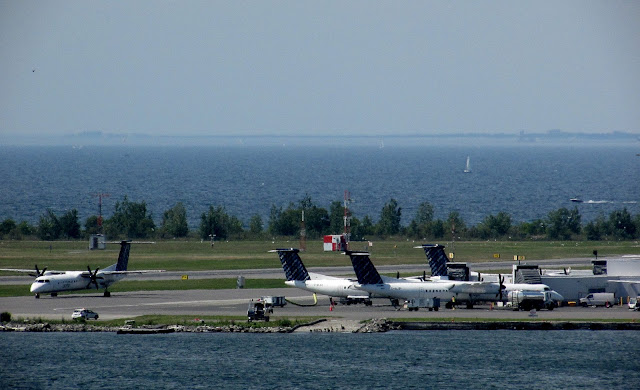 You don't have to live right next to Billy Bishop Airport, like I and about half a million others do, to understand what a disruptive presence the island airport has become.

When the wind blows from a certain direction, you can hear the noise and smell the fumes all over downtown Toronto.

So you can imagine how I felt when I saw that Pierre Poilievre had invaded my neighbourhood. Again.

And had made a deranged video, about his plan to destroy it.

The plan is absurd, all hot air and nonsense. Another bitcoin bubble blown out of his rear orifice.

For let me be absolutely clear, The Pigeon's plan won't fly.

Extending the runway at Billy Bishop won't do anything to improve conditions at Pearson. It has been adding more flights since the end of the pandemic, and it can't handle any more. 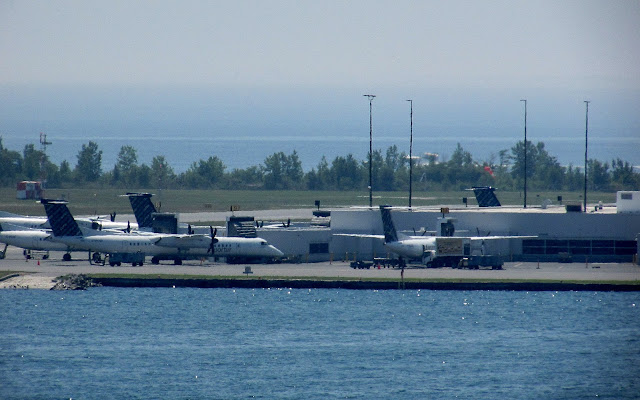 I know because I can see every plane that lands and takes off.

Also, the jet planes that Porter Airlines is planning to use to fly out of Pearson are made by the Brazilian company Embraer, not Bombardier.

Most condo owners who live on the waterfront are not wealthy. There are no million dollar mansions on the island. 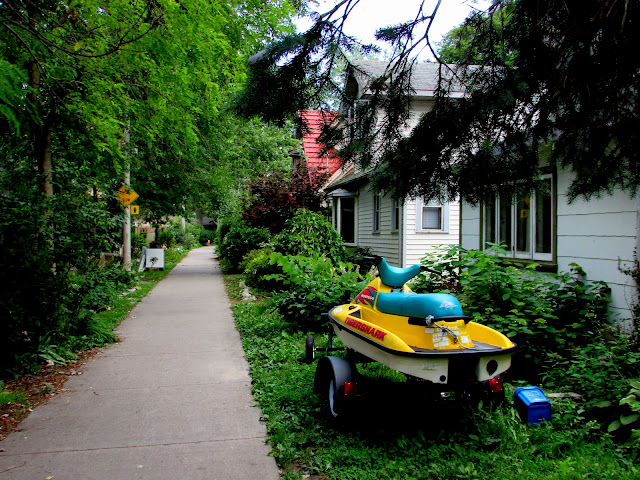 And most of those small cottages are halfway through 99-year leases, after which they will be demolished, and returned to park land for the use of all the citizens of Toronto.

A previous proposal to lengthen the runway nine years ago didn't fly, and it won't fly now.

Back in 2013, Porter Airlines, which is headquartered at Billy Bishop, proposed lengthening the airport’s runway to more than 5,000 feet to allow jets to land.

The pitch was met with fierce opposition from waterfront residents and Toronto Islands dwellers, who expressed concerns about pollution, traffic, and noise, and was ultimately killed when Trudeau took power in 2015.

Poilievre knows that, as did Andrew Scheer... 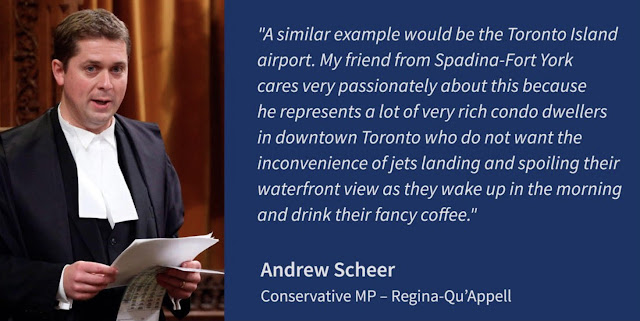 But like Poilievre he was just playing wedge politics, and trying to stir up hatred against the mostly progressive Canadians who inhabit the Toronto waterfront ridings.

And who in many cases have a healthy and longstanding loathing for anything Con... 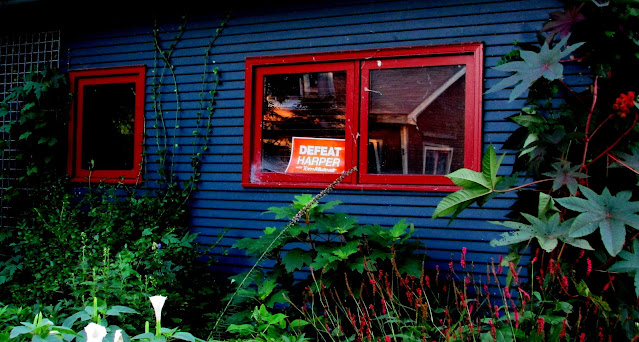 But even more importantly, Poilievre is also desperately trying to deflect attention away his far-right extremist buddies. 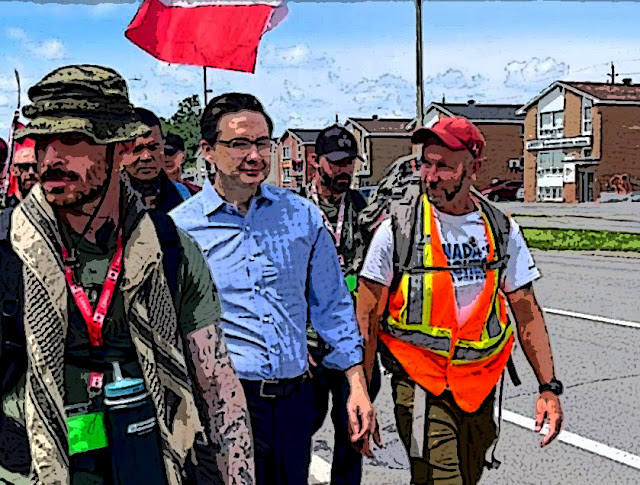 Who are now his living nightmare.

For they are alienating the moderate voters he needs to win a general election, and giving Jean Charest a big boost.

Pierre Poilievre is still viewed favourably by half (49%) of Conservative voters – dropping only a point – while his unfavourable impressions have increased by 9 points. Notably, Jean Charest (45%) registered an 18-point surge in favourability bringing him to only 4-points behind Poilievre, dropping his unfavourables by 5 points in the process.

So Poilievre is running scared. He has to try to get as many Canadians as possible to forget that story before it kills him, and his Convoy Party.

Which also explains why he is dodging skippying the last Con debate... 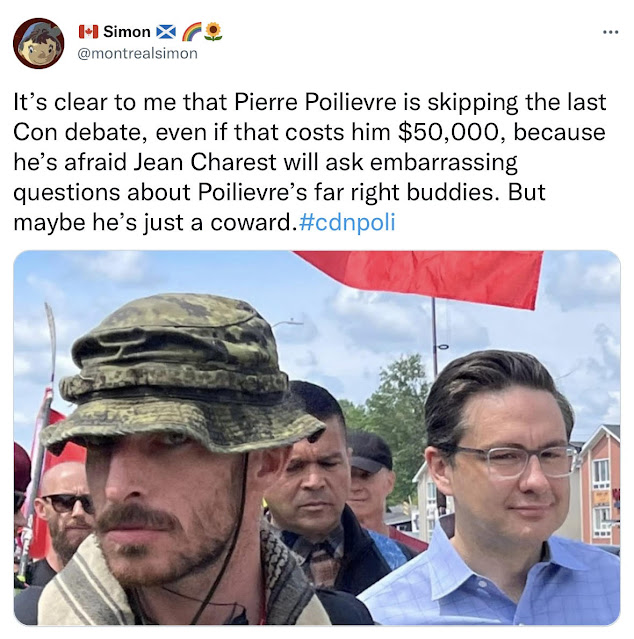 He can't talk about bitcoin anymore, after it blew up in his face.

He can't call for "axing" the carbon tax as the world gets hotter and hotter.

And he can't try to pretend that he is not a terrorist sympathizer, and then claim he's not a coward. 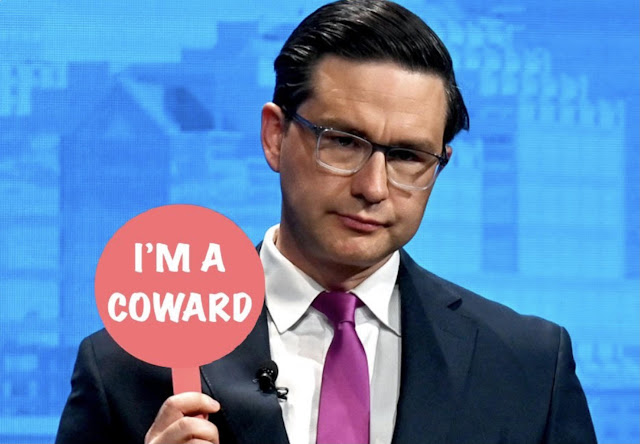 Too cowardly to be the leader of a Canadian political party.

Too cowardly to ever govern this country.

But at least he has given all those who live in the progressive bastion of downtown Toronto yet another reason never to vote for the Cons.

And for that we must be grateful... 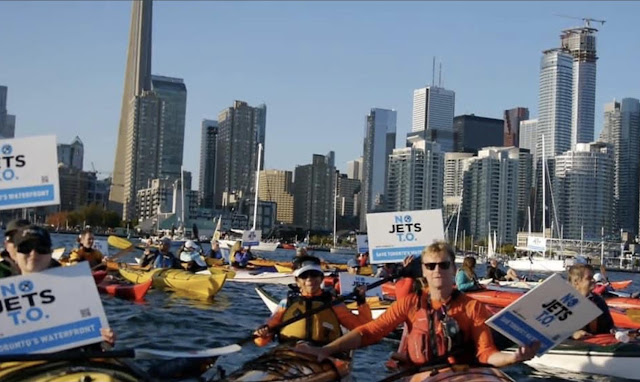 Good thing the airport expansion isn’t back by Justin, or you would have to do some might impressive back flips.

LOL Anonymous 11:16 am. So by your way of thinking if you disagree with a government decision you can no longer support that government or defend it.

God save us from ideologues who demand ideological purity over good governance.

I happen to disagree with the government's decision on the F-35. Considering the most likely primary mission for a manned fighter in Canada the Super Hornet or Gripen would be more suitable. However, I still support the Trudeau government. Remarkable isn't it?

Unlike Simon you didn’t rant and rave for months claims the general ‘horribleness’ of the F-35 and then clam-up like a virgin on prom night when things didn’t go your way.

Jenni 11:16 thinks they should land F35s at Bishop. Silly backflipper.

Trudeau will allow only hydrogen or electric planes as soon as they are widely available. Probably 5 to 10 years.

Even a new Reid poll says he's alienating everyone except PPC cultists and CPC diehards who'd vote for a blue-painted rock in ridings with dictator margins. Maybe instead of being stranded at an island airport, he could be sent off on an ice floe along with Tamara the Leech, Joe Rogaine, Pat King the Joker, and Jenni-O the turkey who allegedly still wants to lay eggs with him. Real man of the people he is, advocating for noise pollution and destructive development in a quiet community. Not to mention it wouldn't even solve the problems Air Canada caused for itself and sought to blame on the feds.

By the way, his latest video features some guy who claims he got locked out of a house by the still-unnamed "gatekeepers" and of course that dastardly dictator Trudeau. Except we don't even know if it's his house, so congratulations Petey for making B&E into a "policy position" to own the Libs. Going for that all-important Kouvalis vote, apparently? What a farce.

Hi anon@11:16 AM...Justin Trudeau ended attempts to extend the runway so jets could land on it, so he's not about to start campaigning for a longer runway. As I pointed out in my post it makes no sense, and shouldn't be a partisan issue. As for the F35s, I was against them at the time because the planes were riddled with so many developmental issues they were dangerous to fly. And they were also ridiculously expensive. Most of the glitches have been worked out, the jets are selling for a more reasonable price, and since most of our allies are flying them, I'm fine with the sale now. Although I personally prefer the Swedish competitor, and regret that it wasn't chosen. So try to keep up...

Hi Ottlib...The problem with the Cons is that they can't adapt to change, and rather than evaluate the capabilities of the F-35 they prefer to use the whole issue as a blunt weapon to wield against the Trudeau government. At the time I too would have preferred the Super Hornet or the Gripen, but now I'm willing to go along with the F-35 for it is said to be much improved, and there are some good reasons to use the same plane most of our allies are buying. I still think that drones will soon dominate the skies, but I'll just be grateful to see the deal for whatever plane finally finished. Goodness know it has gone on long enough....

Hi anon@7:25 PM...I may have ranted and raved during the times when I thought the Harper regime was going to buy a dangerous and incredibly expensive lemon. But what on earth do you mean with this vulgar comment?

Hi anonymous@7:39. Now that's funny, I can imagine an F-35 taking off from Billy Bishop and breaking the windows of every condo on the waterfront. But I would be all in favour of hydrogen and electric planes. Electric models are already quite advanced, and I can see them in widespread use in another five years...

Hi Jackie....I was very encouraged by that Angus Reid poll. It's a big problem for Poilievre and his campaign team, and it explains why Stephen Harper felt he had to come riding to the rescue. Harper's support should ensure that Poilievre wins the leadership, but with Harper and the convoy gang now openly on his side, I can't see that helping him in the general election campaign. And if anything I believe it could increase the chances of a major split in the party. Old Dracula comes back just in time to finish off the party. Oh boy, I'd pay to watch that movie. As for Poilievre's latest video where he allegedly helps a guy climb out of his own house, lets hope for Poilievre's sake it was his own house, or he could be charged with being an accomplice, and end up behind bars much sooner than I had predicted...

Hopefully Poilivere will be humiliated by losing the leadership campaign after being perceived as the favourite.

However don't think for a minute that will quiet you down. If PP does lose and Charest wins, the Liberal social media troll brigade will be going after him with the same fervor.

Ol' Harpo coming out from the woodwork to endorse Peter Popinjay may as well sign the death warrant for the CPC. Who wants to see that guy anymore?
He kept his entire reign as Prime Minister hiding from the press, making enemies lists and tearing down our institutions at the expense of the oil lobby and fundamentalist religionists.

Been there and thanks but no thanks.
But maybe one last kick at the can and one last loss will finally have us rid not only of Poilievre but also Harper, Bergen and the party as a whole.
In a fairly balmy July 26 in the Ottawa region, one can only hope...

LOL Simon!
Have you seen Frank Magazine's caricature of Harper+Poilievre!
They really went deep, so to speak. I might have to throw them a few sheckels, they are always good for a laugh or two. :-)

Hi anon@11:30 AM....I am sure that I would go after Charest if he wins the Con leadership, but not with the same fervour as I go after Poilievre. Charest has many flaws, but he doesn't have the Reform-style viciousness of Poilievre. But of course it's all irrelevant now that Stephen Harper has come out and publicly supported his little demon Poilievre, and thus ensured he will win the Con leadership. And that your Cons will lose the election. Brilliant...

Hi Pierre....I was surprised to see Stephen Harper pop out of his dark rightwing closet and endorse Pierre Poilievre, even though from what we're been hearing PP doesn't need his endorsement to win the Con leadership race. Some have suggested it was just another attempt to get back at Charest, and make him pay for using a Harper transfer cheque to lower taxes. The man is such a seething mix of different vendettas, it's hard to know what made him show his face. But one thing is for sure, he can only hurt rather than help Poilievre in a general election. Also thanks for that Frank Magazine cartoon. I thought it was hilarious, but I'm too much of a prude to use it in this blog. I have to draw the line at Poilievre being flushed down the toilet of history. And I have several versions of that... ;)

Many people grease hair, but why is the Cons have greasy hair polls. Like PP and the guy who went to jail?

My god, the NIMBY privilege dripping from this post is off the scales.
You live in the centre of one of the most overpriced cities in the world. Yet you still want it to remain a quiet bucolic neighbourhood. As if the poors living in the vicinity of Pearson like it any better.
I wouldn't vote for any party headed by Poilievre in a million years, but there is real rage simmering in this country, apparently well below your radar, and he will be its beneficiary.