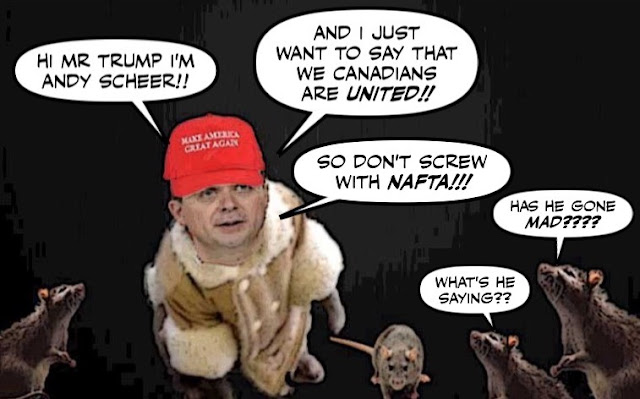 I always thought it was too good to be true. Andrew Scheer offering to help the Liberal government defend NAFTA from Donald Trump and his Trumpkins.

By going down to Washington next week and lobbying the Americans, to show them  that when it comes to the important issues, we're all on the same side.

Conservative MP Andrew Scheer and a handful of his party’s MPs are headed to Washington to promote a “united Canadian front” on the benefits of the North American Free Trade Agreement, two weeks before officials are set to resume renegotiation talks in Montreal.

At least that's what the Cons have been claiming.

And sure enough it was too good to be true. 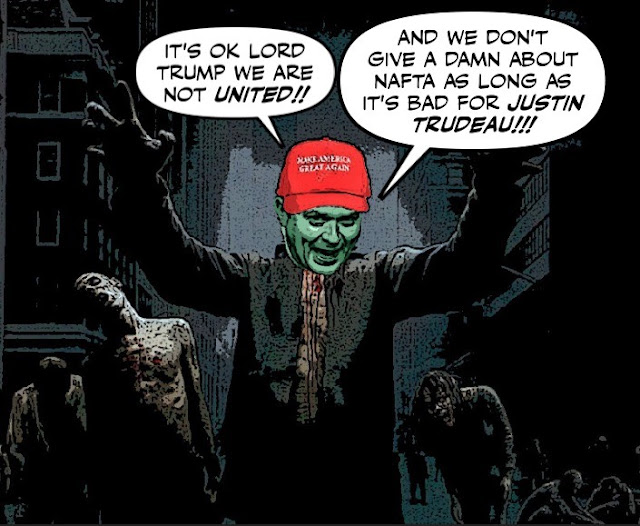 For now it seems that Scheer is actually willing to risk undermining the Canadian side, with a duelling narrative.

In a speech before a Mississauga Board of Trade luncheon, Scheer accused the government of not acting quickly enough to recognize the pending uncertainty of the administration of U.S. President Donald Trump would mean for Canadian trade and suggested Trudeau and his ministers squandered the chance to find solutions to some issues before Trump came into office.

And is just using the trip as another excuse to smear or Schmear Justin Trudeau.

Just like him and his Cons did last time... 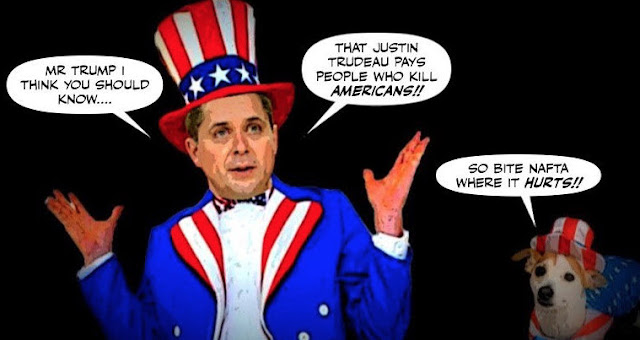 When they risked scuttling the NAFTA accord, and its hundreds of thousands of jobs in Canada, by using the Khadr case to try to inflame the Americans.

For their own very small and very crass political purposes.

Which couldn't have been more disgusting, and bordered on treason.

And then of course, there's the question of why Scheer would have us believe he could be useful on a trade mission.

For sadly for Scheer, his claim that thanks to the carbon tax that the Liberals are promoting, "ALL Canadians can now expect to pay more for EVERYTHING !!!"

Turned out to be once again, just mucho baloney. 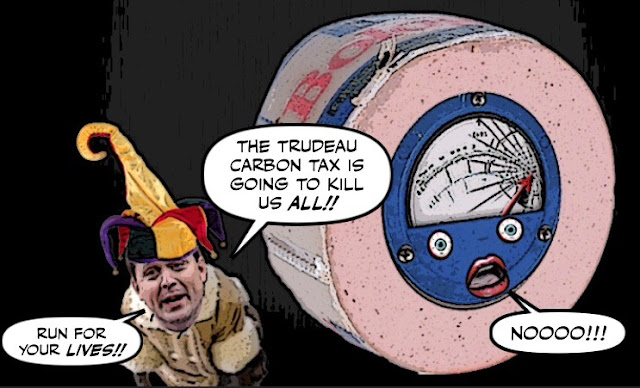 Only one province saw a carbon price change on Jan. 1, and it wasn't directly related to the federal government's carbon price policy. That policy won't enforce a minimum price on carbon everywhere for another year.

Electricity generated by renewable sources won't be touched. And while most products and services could go up directly or indirectly because of the carbon price, the impact on the majority of what Canadians spend money on will be small — and, in many cases, offset by rebates.

For these reasons, this statement earns "a lot of baloney."

And is just another Big Lie from Schmeagol the Con clown... 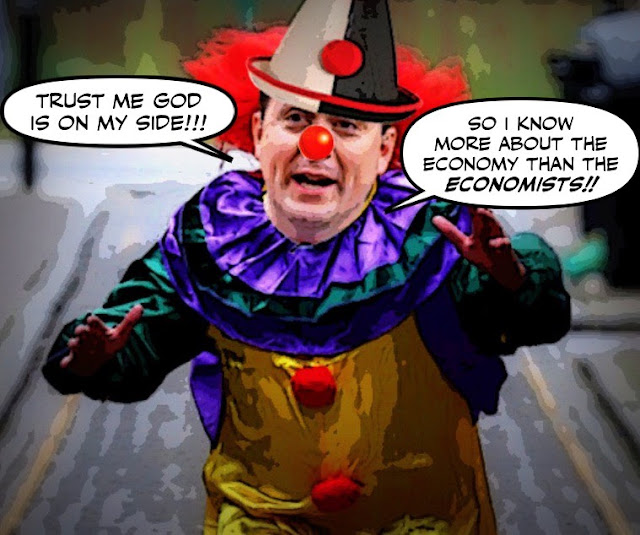 Who doesn't know what he's doing, and whose nose as you know never stops growing. 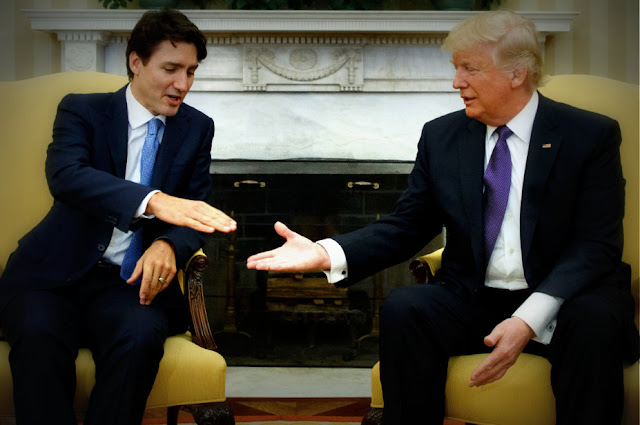 As he knows how to do so well.

And tell the Cons to leave Scheer aka Mr Baloney at home.

Before he embarrasses us further... 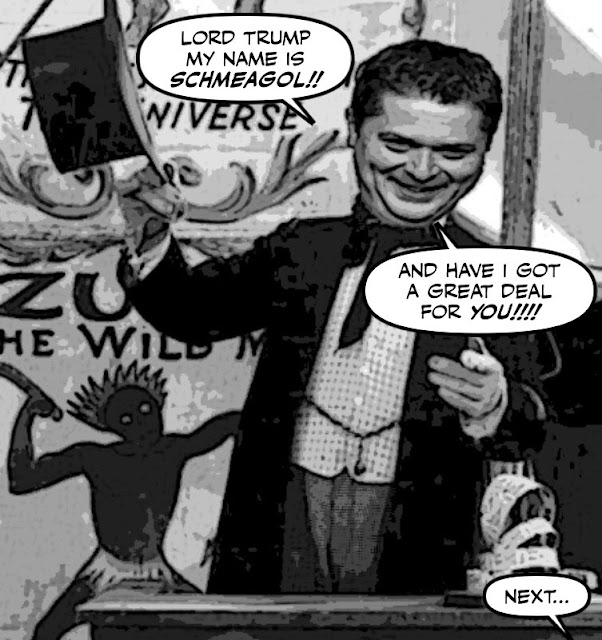 This is where Trudeau pretending to like trump comes in handy. I'm sure he'll send the word to not listen to the bloated hayseed.

A couple of interesting points on trade lately. US interests want a countervail on newsprint. At the same time China is considering banning used paper for recycling and buying fresh newsprint. A market for Canada, a supplier for China and higher prices for Americans. Sounds fair Donnie.

If he really wanted to present a "united front," he would have coordinated a meeting with Trudeau's federal Liberals and even some members of the NDP. He would have even wanted to meet with provincial premiers regardless of their party affiliation. B.C. and Alberta each have NDP premiers in Horgan and Notley, respectively; Brian Pallister of Manitoba is the only P.C., and then there's Brad Wall of Scheer's home province with the Saskatchewan Party. The rest are provincial Liberals, a fact that I'm sure sticks in his craw.

But that shouldn't matter. United is united. Not a showboating adventure for Scheer to sell his "brand" in the sh!thole of Trump's America, and worse, project an image of conflict with, and chaotic lack of confidence in, the Prime Minister and the majority government. He's sneaking behind Trudeau's back while Trudeau is trying to engage and bring together people at home during his town hall events. The cool cat is away, so the rat has gone out to play. What's he trying to do, destabilize the country like a low-rent Putin groupie? He knows that Americans can't vote for him, right? What happened to having Canadians "get to know" Andrew Scheer?

This is like when the Republicans invited Bibi to testify before Congress against Obama's Iran deal. Partisan chicanery that actually threatens the security and stability of the nation. Especially with a senile maniac and desperate cornered animal like Trump at the helm. When Trudeau met with governors, it wasn't to backstab Trump. It was to negotiate on a state level with leaders for things that would benefit Canada mutually as a friend and partner with the United States. And he didn't just call up, meet with or send his ministers to talk to Jerry Brown and other Democrats. They've been working with Republican governors in borderland states like Wisconsin and Michigan which share core industries with the Canadian economy, like dairy and the Detroit automakers. He addressed the national governors' conference last July in Rhode Island, and even said polite things about Pence. That's not the same thing at all. Trudeau is a team player. Scheer is a self-aggrandizing ass who only cares about elevating his name recognition and kicking Trudeau just to be a jerk. He doesn't care about Canadians any more than his evident role model Trump cares about America or anything besides himself.

Simon, based on the track record of Scheer, Raitt and company, including recent interviews, they have no intention of aiding with NAFTA negotiations. Their sole objective is to undermine any possible arrangement with the current Canadian Government. I consider such action treasonous and should they cause harm to the Canadian government's position, they should charged. RG

Jackie Blue - exactly as you said. Such “lobbying” needs to be an all Party effort with the governing party leading.

"A united Canadian front". Bullshit! An international embarrassment is what it would be. The only thing these so called Canadian MPs will be trying to achieve is advancing their own cause and trying to make JT look bad.
They're amateurs with no experience in international trade so expect nothing to be brought to the table other than say, "inadvertently" bringing up the Omar Khadr settlement. It would not be beneath them to undermine the talks by bringing this up and rubbing salt into an old wound.
I hope I'm wrong but Schmear's tenure so far would say otherwise. I now wonder which traitor Schmear will trot out to go on Fox news?
JD

It seems the Cons just can't change their stripes. They know nothing else but attack, attack, attack. They don't give a damn about Canadians, they only care about themselves. What makes it even worse, as you have pointed out, is that Scheer is always talking about his "positive message." What a sick joke.

Treason is as treason does.

The Canadian NAFTA team is well represented by the Conservatives (Rona Ambrose/James Moore) as well as are most of the provinces. In addition the lead negotiator is Steve Verheul a very competent Harper era appointee who negotiated the EU-Canada trade agreement. The Smearmongel has access to this team and nothing additional to contribute other than positioning himself to launch attack ads. Its unlikely he will have enough concern for the welfare of Canadian public to wait until the negotiations reach conclusion. Attack ads after the fact are just sooo boring but sniping before conclusion leading up to the climax is just too much to resist. F U Canada its all about media positioning for the next election.
RT

hi anon... well let's hope so because hundreds of thousands of Canadian jobs could be on the line. But I don't trust Scheer, I think he'll do what he can to torpedo NAFTA, just so he can blame the Trudeau Liberals. Remember, like Harper, he has made it clear that his Godzilla comes before his country...

hi rumleyfips...One of the good things that may come out of this nightmarish period is a reduction of our dependency on the United States. As a trading nation we need to develop new markets for our products, and we might very well thank Trump for that some day. Or at least send him a post card in prison... ;)

hi Jackie...yes, at a time like this one, with so much at stake for Canada, the Cons should have the decency to help present a united front. But they are bestial partisans with a traitor streak, and all they are fixated on is trying to bring down the Trudeau government, by whatever foul means necessary. In fact, I believe the only reason they are mounting their "trade mission" is so Canadians won't hold against them what they did last time. Let's just hope that Trump has so many other problems he won't even notice Scheer and his Cons. Even if Schmear offers to run behind his golf cart carrying his golf clubs... ;)

hi RG...I agree with you completely, the traitorous Cons have already shown that they cannot be trusted, and that they are willing to put their crass partisanship before the interests of our country. And I also agree that if they stab our country in the back they should be charged with treason...

hi JD...Just about every serious economist agrees that the Liberals and their team of civil service experts have done a very good and sophisticated job so far in their dealings with Trump and his foul gang. So I can't see Scheer and his rubes having any useful role to play, or being capable of of doing anything except foul things up. They need to be watched like hawks when they are in Washington, for whatever they might say in public, they can't be trusted to do the right thing, or even behave like Canadians.
I can never forget the ugly sight of Michelle Rempel on Fox News badmouthing her country, I can see her and the others doing more of the same. And I only hope that if they do the hammer of justice will descend on their traitor heads...

hi Steve...I hope that's what a judge will say to the Cons one day, before sentencing them to many years of hard labour... ;)

hi RT...I have been very impressed by our NAFTA team, and the responsible way they have tried to deal with the maniac Trump and his gang of bullies and maniacs. And I can only hope that Scheer knows enough to stay out of their way, and not say anything he shouldn't. But like most Cons he is a partisan rat, and knows only how to attack, so I'm not optimistic he will be able to control himself. But if the Cons do behave as badly as they did last time, they should be made to pay a heavy political price...