Why Are The Cons Trying to Hide Their Rebel Connections?

As I've mentioned many times before, Andrew Scheer must really love his Mini-Me Hamish Marshall, the co-founder of the hate mongering Rebel.

Marshall led his campaign to a thirteen ballot victory at the Con leadership convention.

And a grateful Scheer rewarded Marshall by making him the Con's new campaign manager, charged with returning the Harperite cult to power in the next election.

But if Scheer does love Marshall you'd never know it, because he hates to talk about him.

And as he did a few months ago, if you ask Scheer about him, he panics and runs for cover.

And there can only be one reason for that: he doesn't want to remind Canadians about Marshall's Rebel connection.

And his close collaboration with the monstrous professional bigot Ezra Levant... 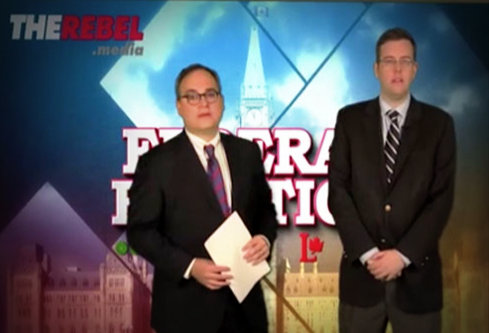 Or alert them to the way Scheer is turning the Cons into a party of religious fanatics and Alt-Right extremists.

As I warned back in November... 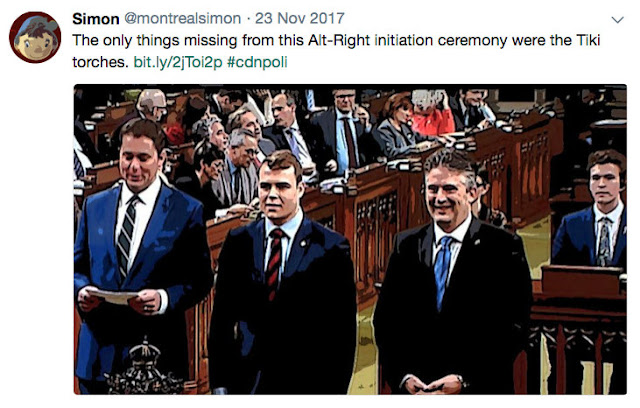 Needless to say the Con Conclave denies that anything like this is happening.

They claim, like many in our hapless Con media, that Marshall is a really nice guy, who was just the numbers man at The Rebel.

And that they have nothing to hide.

But if that's the case, how do they explain this latest cover-up?

Ahead of the country’s largest annual gathering of the conservative movement next month, the Manning Centre this week announced a new slate of speakers including the Conservative Party’s 2019 National Campaign Manager Hamish Marshall.

But one thing is conspicuously absent.

As Canadaland’s Jonathan Goldsbie observed, the bio pretty glaringly fails to mention one of Marshall’s most significant connections: his role as a founding director of Rebel Media.

Why if Marshall is not a threat or an embarrassment are they trying to conceal his background?

And is even the ghastly Con vampire Preston Manning now part of this conspiracy? 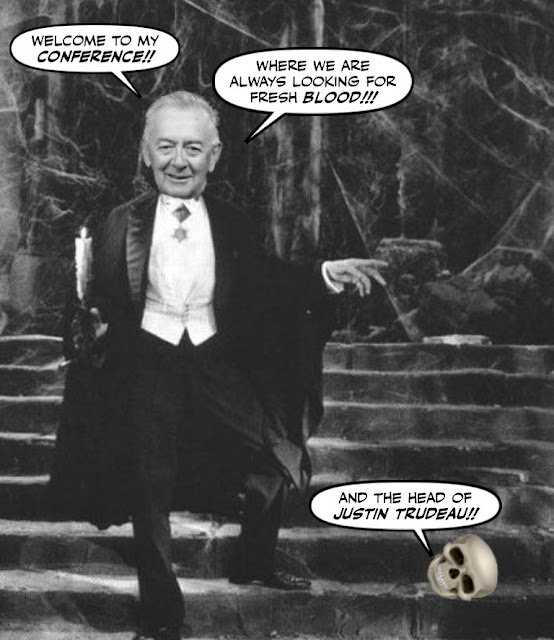 You know, the Con media has never taken the Alt-Right threat seriously, even though it's making its presence felt all over North America and Europe.

Here's one of its members heckling Justin Trudeau the other day... 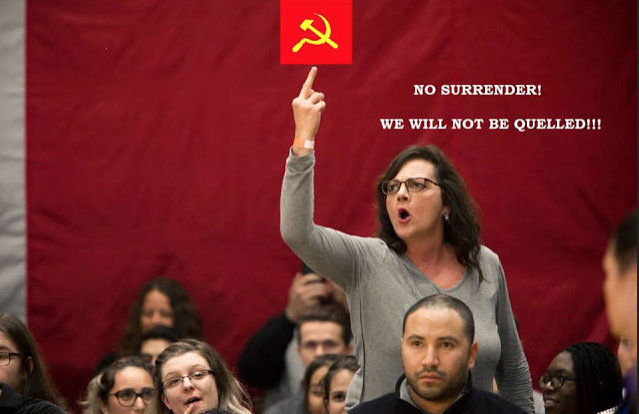 And you can read more about what kind of people they are here.

Or read about how another group of them pulled a gallows through the streets of London yesterday.

An anti-Islamic nationalist wheeled a homemade gallows into central London, led a group of men into a conference hall and attempted to “arrest” the city’s first Muslim mayor as he gave a speech Saturday.

And it seems obvious to me that unless more is done to fight the alt-right, we could end up with the same kind of cockroach problem in this country... 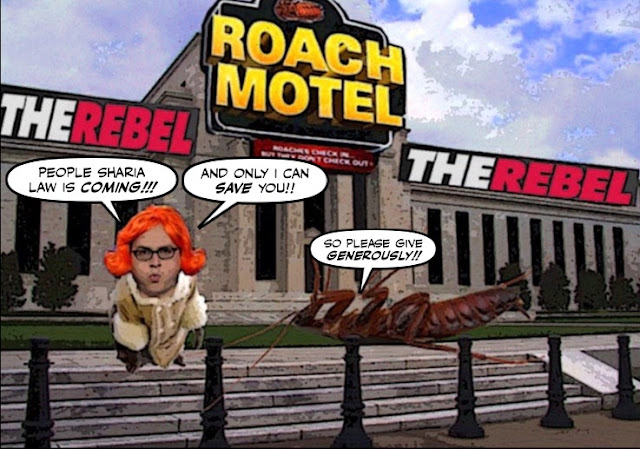 Ezra Levant and his alt-right bigots must be reined in.

The Con media must take the alt-right threat seriously.

And we must crush Scheer's ugly Cons before they poison this country further... 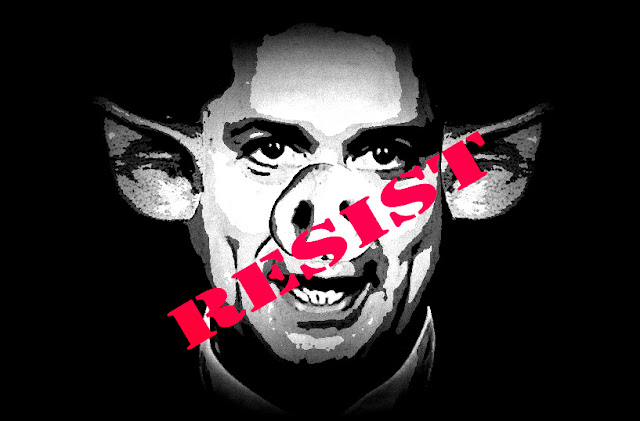 They are disgusting pigs.

Thanks Simon for getting the message out re the Manning Centre white washing Hamish Marshall and his connection to Rebel Media and Ezra Levant. If the MSM won't do it, then it is up to ALL of us to inform the Canadian electorate what is happening.

Those Renfair cosplay idiots in the U.K. are traitors to their country and ignorant of history. As for Scheer, he is going nowhere, and the only "throne" speech he'll be making is a tearful ramble about how much he hates Trudeau, all by himself in a stall at the little boys' room in Parliament or maybe the Fox News headquarters if he washes over to the sh!thole country south of the 49th. No matter how much the Conservative Bullshit Corporation and their Compost Media infiltrators try to ignore the elephant in the room, enough people are chattering on social media — or what nowadays is called "word of mouse" — that he's nothing but a maple-flavored Republican and a bigot occupying space under the dark umbrella of Trump. Why, Trudeau has even found himself a fan in Nancy Sinatra! So something must be going right. 😎

Scheer's jackboots are made for walking right out the door to the unemployment line. But defeating him electorally won't be enough to clean out the stench. Canada does need Eurostyle hate-speech laws, and Google is complicit in aiding and abetting the spread of Rebel's hate-mongering filth on YouTube. They and whoever the server host is for their primary website both need to be bombarded with a campaign to shut them down. They are aiding and abetting criminal harassment and threats of violence toward the prime minister and members of his family. That loudmouth shrew at the town hall got too close to Trudeau, and something needs to be done before one of these unhinged, self-radicalized kooks gets him or someone else hurt.

Scheer must fire Marshall? Dream on! Did Parson Manning fire Harper for hiring Wolfgang Droege's brown-shirt security detail? This is who they are, no matter how much fog the Con media tries to cloak it in.

What does it say about the Cons when they are too afraid to tell the truth about their campaign manager? Don't they understand that nothing they can do will stop us calling them the Rebel or Levant Party?

Manning is in on this cover up for sure. Once he was semi respectable but now he'll do anything to get the Cons back to power. The damage him and his redneck Reformers did to this country can never be calculated.

Interesting article on the Rebel's involvement in the use of Twitter storms to support Big Oil.https://www.nationalobserver.com/2015/06/16/news/oil-propagandists-stir-racism-in-tim-hortons-enbridge-ad-battle .Suggests one of the reasons why our pal the Schmermongol hasn't broken his ties with the Hamish/Rebel connection and has launched attack ads on carbon tax. Bot storms that drown out everyone else are a hallmark of election hackers. Interesting most of the infrastructure is already there and the Cons are close to the people with the keys.
RT

Hi anon...where did you get that idea from. Just because they oink and honk a lot doesn't mean they're all hogs. Or does it? 🐷

Hi Yvonne...you're welcome. I will never accept that it's OK for a campaign manager of a Canadian political party to have worked for a hate mongering rag like The Rebel. And if the MSM has lost its moral compass we'll just have to help them find it...

HI Jackie...The Compost Media? I like the sound of that a lot. Although it does make them sound almost organic, instead of highly Con or toxic, and dangerously dumb. We do need to strengthen our hate laws, and according to the bigot Ezra Levant the government is looking at doing just that. For they are dangerously lax for the times we live in, and if we don't go after the hate mongers more aggressively it will lead to tragedy. But do you think we could get Nancy Sinatra to put on her boots and walk all over Andrew Scheer, because I would definitely pay to watch that one....😺

Hi anon...you're probably right, it would be too much to ask a Con to do the right thing. It is who they are. But what we can do is turn the Rebel connection into a question of judgement, so more Canadians get to see who the Cons really are...

Hi anon....that's my position too. What does it say about them when they are too embarrassed to talk about the man who is going to run their election campaign? You might think that our hapless MSM might have explored that question after Scheer ran out of that news conference. So we the people are going to have to make sure that this real scandal is not forgotten or buried..l

I have never had any respect for Preston Manning. I have always considered him to be another stealthy Bible thumper. And now that his Reform Cons are wandering through the wilderness, he's so desperate I think he's capable of doing anything...

hi RT...thanks for that link and I think you're right, it's could be a sign of what we can expect in the next election campaign. Scheer himself has recently spoken about the need for the Cons to step up their social media campaigns. And that's another big reason he hired Hamish Marshall.
The man is known for creating dozens and dozens of different websites, and I'm pretty sure we're going to be facing an epidemic of so-called fake news, just like the Americans did in their election. Fortunately we have a strong social media contingent, and although we don't have the money the Cons have, we can more than hold our own...

Good reminder. They put these perverts to use and then try to distance themselves when public awareness could make their presence inconvenient. But they'll never be able to ditch them because they're the rotting heart of the libertarian-theocon coalition. They'd be lost without them.