Norway: The Horror and the Sorrow 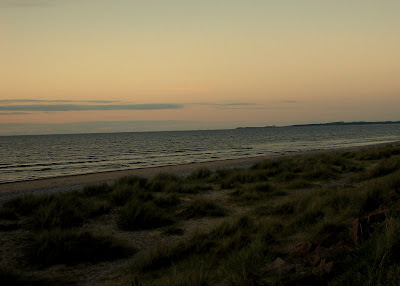 If you sail a boat in a straight line off this Scottish beach where I played when I was a boy, it won't be too long before you'll find yourself in Norway.

Which is why I know them so well, why this hurts so much.

A lone political extremist bombed the government center here on Friday, killing 7 people, the police said, before heading to an island summer camp for young members of the governing Labor Party and killing at least 80 people.

Why this makes me so angry.

After the shooting the police seized a 32-year-old Norwegian man on the island, according to the police and Justice Minister Knut Storberget. He was later identified as Anders Behring Breivik and characterized by officials as a right-wing extremist, citing previous writings including on his Facebook page.

A Facebook page matching his name and the photo given out by the police was set up just a few days ago. It listed his religion as Christian, politics as conservative.

And why I'm so proud of my Norwegian friends tonight.

The evil right wingers are always trying to kill the future, because they know it won't belong to them.

But they will not succeed. Norway will keep on being the decent little nation of peacemakers it has been for so long. And the young WILL change the world.

As I told you last night, two weeks ago I attended the big Scottish music festival T in the Park. There was the usual contingent of kids from Norway. And they were as sweet and as funny as I remember them.

So tonight I can't help thinking of them, and this song...

Here's to the bloodied youth of Norway, and all the other suffering people in that beautiful little nation.

May they continue to be a progressive beacon of light in a dark world.

What an awful, horrific, cowardly crime. Norwegians are such lovely people and they simply did not deserve this; no one does. For this Quisling, Anders Behrings Breivik, to so viciously murder innocent men, women, and children - utterly despicable. Hopefully if any good comes out of this it's to cast daylight onto this foul, cowardly bunch of bigoted fascists and murderers and show to the World what they and their rotten "movement" are all about. Our fathers, mothers, grandfathers, grandmothers, aunts and uncles of every race, creed, and nation gave their all fighting these bastards seventy years ago and we have to continue the fight now and show the fascists and corporatists and racists and bigots and religious extremists that there is no place in the World for their kind of hateful nonsense.

"If you sail a boat in a straight line off this Scottish beach where I played when I was a boy, it won't be too long before you'll find yourself in Norway.

hi Neil...I've never understood why neo-nazis are allowed to wander around Europe and Russia and Canada after what their ilk did during the war. In my opinion they should be outlawed and arrested on sight. And yes the Norwegians are a marvellous civilized people. It must be an awful shock, but I'm sure they won't surrender to fear...

hi Mound...I don't know or care what Sarah Palin said about Russia. I grew up on the northeast coast of Scotland, which is closer to Norway than London, there were always Norwegians around. We shared the North Sea, and I played football with their kids. Which is why I wrote what I did. I could have chosen to play up the indecent glee of some right-wingers who thought an Islamist was responsible. But I chose to mourn with my friends. That is all...