Norway and the Bigot Bastards 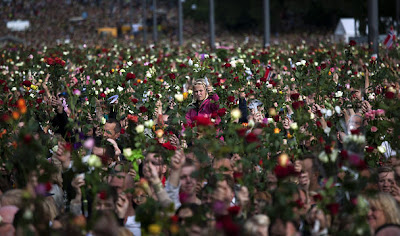 As Norway mourns its dead. And sorrow turns to anger.

The right-wing monsters of this world continue to try to turn tragedy into triumph, by blaming Muslims for the massacre.

Or condemning the killer for damaging their bigot cause.

During the hours when I thought that Oslo had been attacked by jihadists, I wept for the city that has been my home for many years. And I hoped Norwegian leaders would respond to this act of violence by taking a more responsible approach to the problems they face in connection with Islam. When it emerged that these acts of terror were the work of a native Norwegian who thought he was striking a blow against jihadism and its enablers, it was immediately clear to me that his violence will deal a heavy blow to an urgent cause.

Great eh? From the man who did more than most to inspire the monster's bloody rampage. Never mind the dead kids, it's all about THEM.

Breivik’s rampage would likely never have taken place if Islamic terrorism wasn’t so ubiquitous. If we didn’t need to breathe that sigh of relief that al-Qaeda didn’t attack Norway, the attack probably wouldn’t have happened at all, since dangerous fanatics in Central Asia wouldn’t have inspired a dangerous fanatic in Norway.

Only to have that steaming turd attract some ghastly flies. 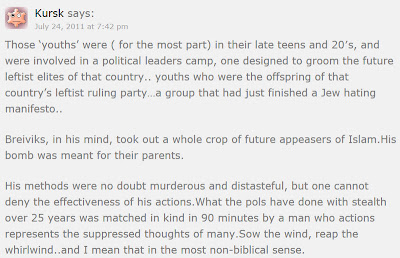 The bigot bastards. Now can we call them ROACHES?

Oh well. At least the light of the world is shining on their Roach Motel.

The man accused of the killing spree in Norway was deeply influenced by a small group of American bloggers and writers who have warned for years about the threat from Islam, lacing his 1,500-page manifesto with quotations from them, as well as copying multiple passages from the tract of the Unabomber.

And they can run but they can't hide:

Mr. Spencer wrote on his Web site, jihadwatch.org, that “the blame game” had begun, “as if killing a lot of children aids the defense against the global jihad and Islamic supremacism, or has anything remotely to do with anything we have ever advocated.” He did not mention Mr. Breivik’s voluminous quotations from his writings.

The Gates of Vienna, a blog that ordinarily keeps up a drumbeat of anti-Islamist news and commentary, closed its pages to comments Sunday “due to the unusual situation in which it has recently found itself.”

Yup. Poor decent little Norway will survive. Which more than I can say for the bigots.

For they have been dealt a mighty blow.

It's getting lonely in the Roach Motel.

And their shaming will last FOREVER....
Posted by Simon at 7:21 PM

These bigots have no shame. What I hope dawns on most decent people is that Breivik is not an aberration but the product of how emboldened and enabled the extreme right wing has become throughout Europe and North America.

A quote from an excellent analysis:

McVeigh and Breivik are bloody reminders that Western culture’s original sin—the presumption of supremacy—is alive and well and clenching many a trigger. It’ll be easy in coming days, as it was in 1995, to categorize the demons as exceptions unrepresentative of their societies. Easy, but false. Norway, like much of Europe, like the United States, is in the grips of a disturbing resurgence of right-wing fanaticism. “The success of populist parties appealing to a sense of lost national identity,” The Times reports, “has brought criticism of minorities, immigrants and in particular Muslims out of the beer halls and Internet chat rooms and into mainstream politics. While the parties themselves generally do not condone violence, some experts say a climate of hatred in the political discourse has encouraged violent individuals.”

It’s convenient duplicity. The parties don’t explicitly condone violence. But they would have no appeal without explicitly endorsing beliefs of supremacy and projecting the sort of scorn and hatred for those who fall outside the tribe that cannot but lead to violence or the sort of fractured society we’ve become so familiar with. Those “Take Back America” bumper stickers share most of their DNA with the same strain of rejectionist white Europeans who think their culture is being bankrupted by Socialism and immigrants.

"separatists" and "socialists"
BAD.BAD.Evil.
Baird and Harper continually reminded us ...and our PM still does,less these days about separatists, but socialists...Canada doesn't want those.

They're embarrassed, but not shamed.

They lack the sensitivity to feel shame.

Which explains their contemptible mental output.

hi Beijing...I share that hope. I know in Europe it has had a powerful effect. But here in Canada not so much. When Ezra Levant and Margaret Wente declare that the killer is just an isolated madman you know the fix is in....

hi Oemissions...yes the sight of Stephen Harper shedding crocodile tears after demonizing Layton so much was truly disgusting.
I am hopeful however that the revulsion so many are feeling for right-wing extremists will eventually wash over him and his Cons as well.
Oh happy day...

hi Thwap...Yup you are exactly right. Which is why instead of saying that they should be ashamed of themselves, which as you point out is not possible. I suggest that we shame them in the eyes of voters, which can take many forms, but all adds up to the same thing. Hit them where it hurts... ;)

Good luck on exposing the bigots.

Breivik was helped by a very Islamophbic press in Norway who undoubtedly would have inflamed his hatreds.
The establishment was anti-Muslim and the 2008 book called Norway - A Triumph in Bigotry by Frederick Delaware was an ill-omen.