The Year that Was and our Great Gay Cause

Ok that's it.... I'm outta here. I'm off to ring in the New Year in Montreal with some of my oldest.... and wildest friends. And I'm in the party mood!! Sebastien called up to wish me a Happy New Year in case he can't reach me tonight. And gave me the exact date and time of his arrival. So that's reason enough to celebrate. Whoopee!!!!

And there are so many others...

The criminal Chimp Bush regime is falling apart like a soggy bag of shit. Even the dummest yankees now know that Iraq is a disaster. The Republicans lost control of Congress. Ted Haggart literally blew the wingnuts off the electoral map. And here at home, after threatening to give Stephen Harper a majority.Quebec flipped Great Leader onto his tummy and fucked him in the ass. Ooh la la. Ouch!

And then there was our glorious gay cause. For those of us who fly the rainbow flag of freedom this was another winning year. 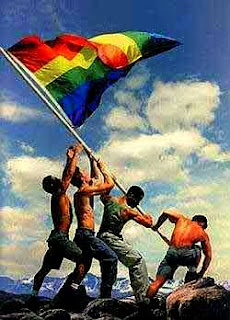 We raised our victory flag over the gay marriage battlefield again. And we didn't just beat the crazy wingnuts this time. We whupped them.

I didn't choose to be gay. But boy I'm glad I am. I'm proud to belong to such a beautiful gay family of all races, languages, and religions.

Proud to belong to the great liberation movement that despite all the hate, the setbacks, and the disappointments. Keeps marching on towards that glorious day when we will all be free.

A movement where every generation is playing its part coz it has to. The seniors who were thrown in jail when they were young or lost their jobs just because they were gay. The AIDS holocaust generation who fought for the rights of our dying brothers.When nobody else would. The thirty something slackers who led the fight for gay marriage.

Then there's my generation that does all kinds of things..... like.....um.....cleaning up after the Gay Pride parade

Oh boy was that fun!! Although next year I want security...

And then behind us are the kids. Who are coming out earlier all the time. Who are joining our struggle and making us proud.

When I see a really young gay or lesbian couple walking down the street holding hands unafraid to show their love. I feel like doing one of these..... 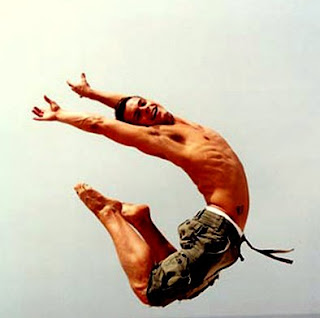 If gay and lesbian kids can be protected from bigots and bullies so they can be free to spread their wings and fly like me. And love who they want to love. Instead of having their lives snuffed out or stunted by hate. Then they will be the generation that finally leads us to victory one day.

So we know what we have to do next year. But you knew that...

So right now I'd just like to thank all my blogging friends who made my first year as a blogger such a fun and rewarding experience. People like Mark, and Bruce, and JJ, and Scout, and Lenny, and Waterboy, and Beep, and Jay, and Kenn and Scott and Rashid. And all my other friends.

And of course I'd like to thank Sebastien my hero and lover. For everything. Bonne Année mon amour!!!!!!

Sebastien who made me promise today that I wouldn't climb the giant cross on Mount Royal. And dance on it as the New Year roars in. And the fireworks soar into the sky. And the ships blow their horns in the harbour below. As I'm always threatening to do. Especially when I'm drunk....

So instead I think I'll let this young couple from Derby, England ring in the New Year. With their awesome sync version of this eurodance classic...in Romanian!!!

Wow!! Numa ...numa....yay. Doesn't that want to make you get up and dance? How dare they bully them? How can we lose? Long live our precious gay and lesbian youth!

Long live our glorious freedom cause!!!! 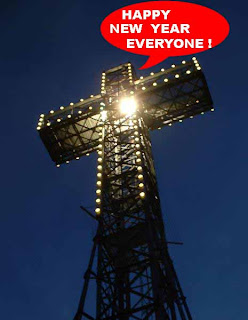 Happy 2007 Simon! Have a blast tonight, and stay off that big cross.

Simon, happy new year to you and all of your close friends and family. Montreal...sure wish I was there tonight, it's the most kick ass city in this vast land of ours and it continues to lead the way in combating religious fueled hate and prejudice. The wingnuts in the Okanagan valley here still have far too much control, the area badly needs a gay club/hangout, but the bible thumpers still call the shots. That's going to change with the influx of sane people from other parts and the bible thumping will go to the depths of Okanagan Lake where it belongs. It was a year of victory in Canada, but we mustn't lose sight of the fact that our gay brothers and sisters worldwide need our help, support and inspiration because they are being strangled by the evils of religious bigotry and shame. Particularly in those islamo christo facist regimes in the middle east and Africa, their struggles are just beginning, and we need to step up to the plate and end this dumbfuck religious nonsense that is killing our brothers and sister.
On a happier note, 2006 saw some positive change especially the yankee wholloping of the neo-con frauds south of the border. Keep up the great work and keep blogging . Yours is one of the best reads on the net.
Cheers to all.

Well written and a very Happy New Year to you, Sebastian and all your friends and family. And if Rory is reading, take care. (Rory is a gay friend of my daughters and we haven't heard from him in a long time, so I hope he's okay, safe and having the time of his life.)

Nice post Simon, I love the two cuties in the vid. Wish I could have joined you, I’ve spent quite a few New Years Eves in Montreal, always a good time. Happy New Year!

the best of 007! hmmm.....will james bond come to save the world? have the greatest of times, my young warrior friend, and keep this blog a blogging!

Hi JJ!! Thanks a lot and the same to you!! I just got back from Montreal (sigh) and I had a fabulous time. Although I can't remember all of it :) AS for the cross don't worry I learned my lesson years ago...a couple of months after I met Sebastien...when I was still a bit of a JD...I thought I'd impress him by climbing the cross.It's not hard but when I got to the top it was swaying a bit so I froze. Sebastien had to climb up even though when he got to the top I discovered that he REALLY suffers from vertigo. I had to talk us both down with my eyes half closed. We weren't lovers before that. But shortly after that we wuz...

Hey Waterboy...Thanks a lot and the same to you and your man!! You know I love all parts of this country (even Alberta...just don't tell anyone) but Montreal is special to me. I love that city so much...even the grimy parts...that I think I'm going to have to leave intructions in my will to scatter my ashes on Mount Royal!!
In the meantime...sign me up for the Okanagan Liberation Front!!!
Altho...you guys already live in such a beautiful place...if we chased the wingnuts out of there it would be paradise. And then I'd be jealous! :)
Seriously tho brother you're right about never forgetting our brothers and sisters who are suffering all over the place. That's what so great about being gay. We don't just get to attack these crazy wingnut devils at home. We get to attack them all over the world!! What more can we ask for?

Hi Good Grief! Thanks and happy 2007 to you and yours. I really should have included you on my list of friendly bloggers because you've encouraged me right from the start. So thank you!!! And don't worry about Rory...I'm sure he's fine. The one good thing about belonging to an oppressed group is that some things don't have to be said....we just take care of each other...altho not as much as we should. But that's mission Next Year!!!

Hi Bruce!! thanks...and I'm glad you liked the little video. I thought it was cute too...not just because they're good, but because they were obviously having so much fun making it. Although I've got to say once that tune got into my head I couldn't get it out. I HAD to download it...even tho it's several years old. And then I drove everyone crazy in Montreal by singing 'My Yahee My Yahoo and all those other Romanian lyrics!!
Happy New Year Master Blogger!!
Grasshopper...:)

hi Scout!! Hey don't raise my hopes...never mind the rest of the world this new version of James Bond can save me any day he wants!! I always figured I could whup those other pretty boy Bonds. But this more rugged version is different. I just might let him win...
Seriously though I've got really bad feelings about this year. So many historical forces are converging. The Iraq Criminality has unleashed all kinds of dangerous forces.I'd be scared shitless. But I'm a Spirit Warrior (apprentice category) so I'm not!!!