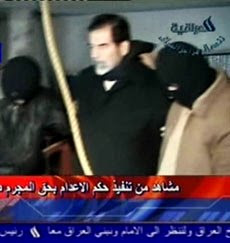 Wow! Wasn't that an awesome tv show ?Although without a program it was hard to tell who were the good guys and the bad guys. The pathetic old dictator staring death in the face. Or the hooded thugs who hanged him. And then danced around his body.

BTW ...... if you're a crazy neocon nutbar and you're pissed about not getting a chance to witness the grisly finale. Don't worry you will

"I think it might be appropriate at some point to see an image of Saddam after he is hanged..."

"I think about that iconic image of Nicolae Ceausescu in Romania, lying literally in the gutter. I want to do this with a measure of taste, but I don’t want to stand in the way of history.”

Oh please. Don't make me vomit. Somebody please tell that network bimbo that history couldn't give a shit what he does. It's already decided who won the war in Iraq. Iran did.

Wow! Let me see if I can get this straight.... although I hate that word. The criminal Chimp Bush regime goes after a handful of Sunni religious extremists who planned the 911 attack in a Hamburg mosque. By attacking Iraq the only secular state in the Gulf region. Only to end up handing most of the Middle East over to gazillions of Shia religious extremists. Who on the Crazy Religious Fanatic Index make the Sunnis look like pansies.

See what I mean? The whole thing is going from tragedy to farce. Just like our little war in Afghanistan.

The one you'd know more about. If the correspondents they allow over there weren't so busy blowing General Scumbag. 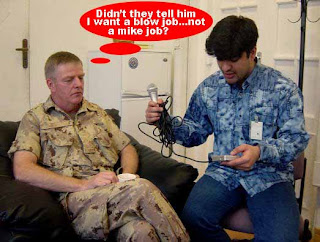 "After sunrise Gen. Hillier addressed the troops on the deck of the ship. This was the first of countless speeches he would give over the next four days. He is funny as hell and inspiring as anyone I have ever seen speak. He makes soldiers laugh and then he makes them cry. He thanks them all in a way that makes everyone grow inches..."

Hmmm.....maybe I better sign up....just a few inches more in the right place and I'd be REALLY popular. But what is it about men in uniform that drives some men to distraction?

Or makes that crime hag Christie Blatchford gush like this in the Globe today....

"As I write this, I am for the first time in more than two weeks fully, completely warm. I am dry. I am clean, having scrubbed myself in a long hot shower.... I have done a huge laundry, and washed the thick Afghan dust and mud from my clothes. I even spritzed on a little perfume......"

And then goes on to write how all those hunky men make her wish she was twenty five.

OMG! What a horrible thought. Forget about signing up. Never mind the Taliban. Who is going to save us from her? The thought of that little right-wing ferret coming after me is enough to make me queer.

But seriously.....this isn't war reporting this is Harlequin Propaganda. So I can't really understand what NATO is trying to hide.

"Despite our explanations, most allied nations consider our media posture as very progressive and risky."

I just don't get it. Aren't we ALL supposed to be on the progressive side? And since when are blow jobs bad for morale?

It's all so confusing......but at least the grisly Saddam Show made me finally decide just how I feel about the criminal war in Iraq.

".....I'm now silently rooting for the Iraqis to wrest their country back from the invading crusaders by whatever means they can. I'm hoping they find a new Saladin or even if all else fails a new Lawrence...."

".....We're just there to convince them or maybe force them to be more like us. Or failing that to kill them."

You know although I've always opposed the war in Iraq. I've always felt sorry for most of the American soldiers there. I can't stand the idea of seeing our neighbour's kids getting killed, blinded, and mutilated for nothing. Just like I can't stand that happening to our own.

But the crazy yankee war machine has brought so much misery and bloodshed to the Iraqi people. Inflicted so much horror on the world. And made it such a crazy and dangerous place.

That I now think this collapsing Evil Empire is going to need to be taught a lesson they'll never forget.

Until they finally get the message most Iraqis, and most of the rest of the world is trying to tell them...

You know I still feel for those yankee soldiers... I can't help it....I don't really want to see them hurt or killed.

They're so young and dum they're almost innocent.

But if their war criminal leaders can't understand enough is enough. Or get the fuck out.