Family Gatherings and Other Christmas Horrors 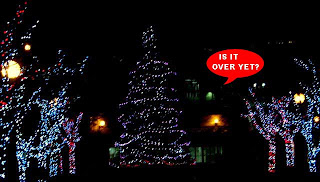 Whew...I think it's finally safe to come out. The greedathon is over. Until tomorrow...when they'll start killing each other in the aisles again. Right now most families celebrating Merry Cashmas are just threatening to kill each other at home.

I got a call from my older brother who is at the big family gathering in Scotland. They were just about to sit down for dinner. But he wasn't sure whether they would be carving up the turkey. Or carving up each other first. Then my poor dad got on the phone and all he could whisper was "the kids....the kids..." I know. I know. Family gatherings and Christmas horrors. Geez....too bad I couldn't make it this year.

The one good thing about spending Christmas alone is that it's so peaceful and quiet. Kerouac and I had a marvellous time. I didn't have Sebastien. Alas. I didn't have Baby Jesus. I don't believe in that garbage. I didn't have Santa. Not even one of the gay bear kind.

But at least I didn't have to line up to be served turkey and horseshit by that bloated blood pudding Scumbag Hillier. Barf. Anything would be better than that.

And at least one of Santa's reindeers did deliver some presents.... 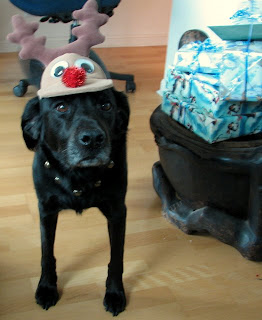 And of course we had all those inspiring Christmas Messages to keep us amused....

Oh not the boring old Queen's Massage. Why would I want hear what that English bag has to say? I'm Canadian. The sooner we sever our link with that absurd monarchy, the sooner we'll be a real country.

And I don't really care what that other old queen had to say either. Who is he to call our relationships dismal?

When he's having boyfriend troubles.

It's enough to make you blow a gasket.

So something has got to be done .... will one of the many other closet queens at the Vatican please do the saintly thing and make him sit on a washing machine.

No...the Christmas Message I could hardly wait to hear was Great Leader's Yuletide Address to the Canadian people. I knew it would be scary and it was. 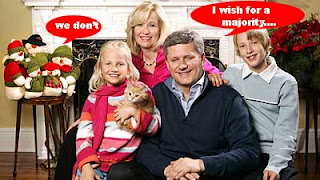 The Ministry of Propaganda and Disinformation version is only designed to try to fool Canadians into thinking Great Leader is human. Instead of a ruthless coldblooded ideologue who would turn Canada into an inhuman yankee jungle.

No I mean President Harpo's real Christmas message to Canadians....the one that gives us a better idea of how these neocon crazies might behave. If Canadians were ever dum enough to give them a majority.

Hmmm....kind of sums up the stinky neocon year we've had. Doesn't it? And for that matter what I think about Christmas too...

But the part I like best is what it suggests we do to rid our country of these crazy pests.

Arm ourselves with giant flyswatters. And swat them down like bugs.

Now isn't that a cheery thought ?