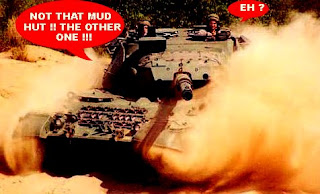 Mothers hide your children! Afghan mothers that is....here come the Canadians!!!! We may not have enough soldiers. And we're not going to get anymore from NATO. But at least our troops can say tanks for the tanks.

Our Leopard tanks have gone into action.And not surprisingly those Afghan mud huts don't stand a chance.

Their first target was an abandoned grape drying hut with metre-thick mud walls said to have the resiliency of bullet-proof armour....But against the tank guns, the hut never had a chance.... The shells punched holes through the mud walls and blew the roof off in a dramatic plume of smoke and dust....

Oh great....first we call in yankee airstrikes against villages...and kill all kinds of innocent civilians. Now we're destroying villages hut by hut. The real story isn't getting out.

The intensity of the challenge in Afghanistan is greater than the headlines admit to - the US Air Force has carried out 2,000 air strikes there since June compared with 88 in Iraq. Some 41 British soldiers have been killed there since 2001 while 3,000 civilians, militants, Afghan troops and aid workers have died so far in 2006 alone.

And don't you love what the Taliban now call us?

Not just that they lost. But what happened in their minds.

It is hard to kill people without demonizing them....In 1988, my unit accidentally hit an Afghan wedding party. My friend, whose mortar shells had killed innocent people, was shocked when he learned of it. Some soldiers, however, were indifferent. "That village supports the resistance, anyway," they said. Like NATO now, we didn't count "their" casualties. ...... As another friend, Alexander, would later write: "We thought that all of them -- old and young -- were insurgents."

If we don't watch it we'll end up using those tanks like the Americans do in Iraq.

That's what happens when you don't know what you're doing...when you start thinking you're a conqueror instead of liberator. Just like we will. If we start thinking of ourselves as superbeasts instead of peacekeepers.

The thought of Canadian troops being responsible for the deaths of thousands of people in a primitive and barbarous land, in a war that can't be won, doesn't fill me with pride. It fills me with revulsion.

Pulling our troops out sooner rather than later might not just save a whole bunch of Canadian and Afghan lives.

It just might save the reputation of our army and the soul of our country as well...