The Dunce and the Terrorist Conspiracy 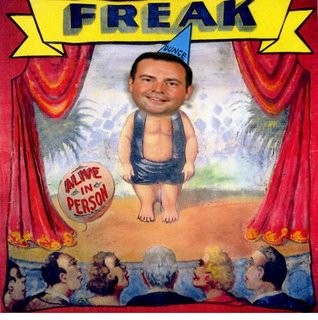 Uh oh lock up your children. Run for cover. The ReformCon dunce is loose in the land again. And this time it's not just dum. It's dangerous.

First the buffoon disgraces Parliament by putting down Canadians who fought the fascists during the Spanish Civil War. And minimizes the role played by Hitler and Mussolini.

Then he says the real Nazis are Hezbollah, after declaring that a woman's right to choose is undemocratic Or that gays have the right to marry as long as they marry heterosexuals

Now it turns out the dunce has been hanging with terrorists. And he says he didn't even know it? Is this a terrorist conspiracy, a protestation of cretinism, or an insanity plea? Are these ReformCons really our government? God save us all.

Oh speaking about that...please whatever you do, DON'T show him this story.

He might make a beeline for the Middle East to await the Rapture. And probably end up starting World War Three.

Without even knowing it....

As you know I blame this deplorable state of affairs on the dunce's lifelong obsession with chastity. But I thought it only caused your private parts to shrivel up, not your brain as well. Oh well...... at least the solution is obvious.

How about hooking him up with a hot little number of the paranoid persuasion?
Think of all the hot times they could have together. Swapping conspiracy theories if nothing else. From one cyborg to another.

And if that doesn't work? Memo to President Harper: If you can't stop your attack dunce from talking crazy. If the muzzle isn't big enough or keeps slipping off. Will you please remove its voicebox? Or better still.

After all, don't castration and chastity go together.

Like neocons and nutbars?
Posted by Simon at 12:55 PM

Yeah Kenney, I'll go right out and marry a heterosexual, is this man rational?

Of course he isn't waterboy. I forgot to mention that he also called Nelson Mandela a terrorist. I also forgot to mention that when he came out with that Farmboy of all people wrote a long and rambling e-mail that began by proposing to marry him, and ended by telling him to and get a brain transplant -- as well as fucking himself! He didn't get the transplant obviously. But he sure is fucking himself and his idiot party!