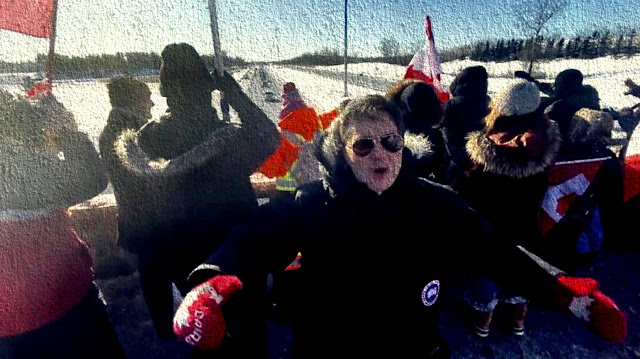 I can only imagine how pleased Pierre Poilievre must have been, to be the first Con to welcome the far-right truckers to Ottawa.

He cheered their arrival, he defended their occupation, he brought them donuts and coffee.

And for a while at least the move paid off, as the convoy kooks bought lots of memberships and helped give him a big lead in the Con leadership race.

But that was then, and now it's a nightmare. 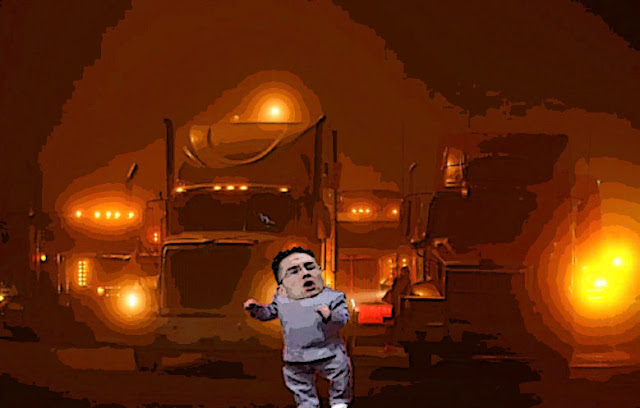 For now it turns out his convoy buddies were riddled with potentially dangerous terrorists.

Now we find out that while Poilievre was pandering to the convoy crazies, and claiming they weren't a threat, the RCMP was worried that some of their own officers were part of the problem.

So Poilievre must be held accountable for having fanned the flames of toxic Trudeau hatred, and inspiring others to go after the prime minister in the most bestial manner. 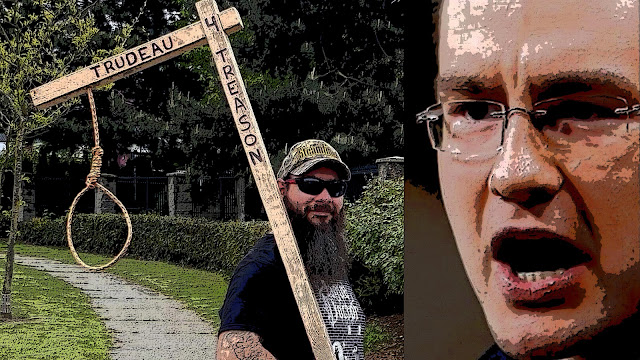 While he whoops it up with the ghastly far-right thug Jeremy MacKenzie, the founder of the Diagolon terrorist movement. 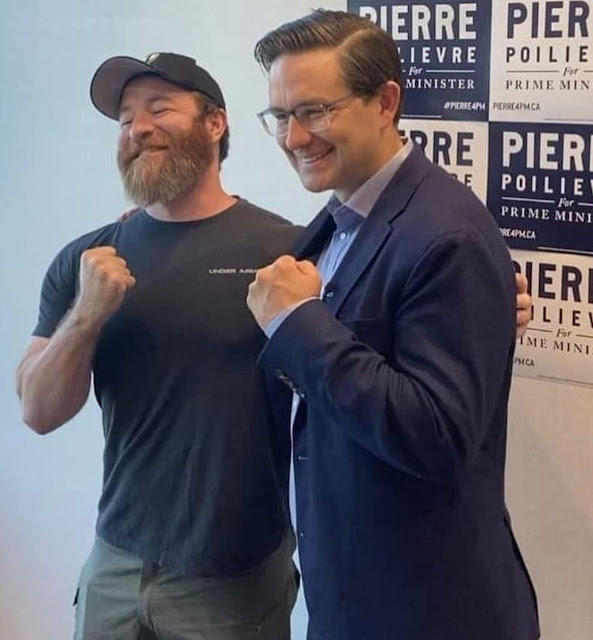 It's a deeply disturbing picture, so much so that some in the media are warning that Poilievre is taking this once peaceful country to a very dark place.

Poilievre has gone too far. It’s time he started to cool down his rhetoric and chill out the more radical segments of his base before someone — a politician, a police officer, a journalist, an ordinary citizen — gets seriously hurt, or worse.

Others wonder whether can contain the beast he has unleashed... 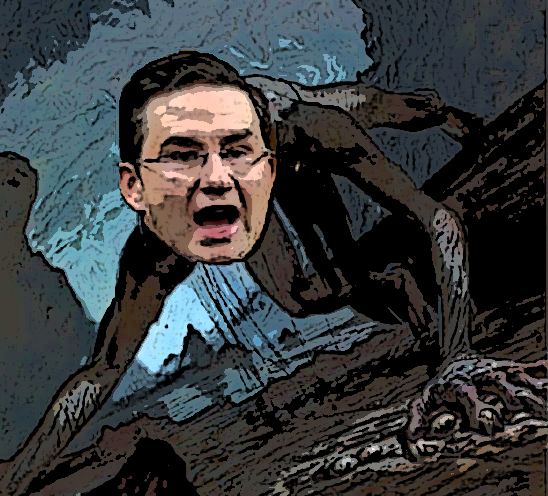 Like the dwarves who dug too deep for riches in the mines of Moria, Poilievre has plumbed the depths of social media for conspiracy theories and grievance rhetoric, coming up with campaign gold by embracing the freedom convoy and anti-vaxxers. It has earned him a ton cash for party coffers and a record number of new memberships.

The question now is whether Poilievre can contain the populist beast he has unleashed by channelling his inner Stephen Harper, or whether he’d rather hop on its back, ring firmly embedded, and burn the place down.

And besides, he has been sowing rage for so long... 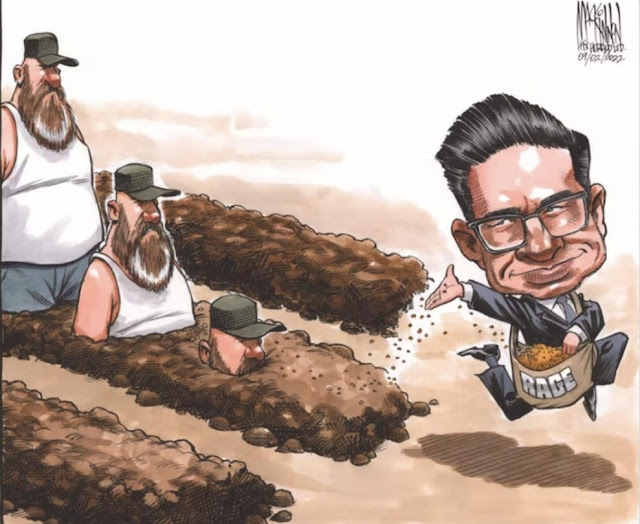 Now he can only be described as a terrorist sympathizer himself.

Most ugly members of his Convoy Party may love him.

More than half of Conservative voters in Canada want Pierre Poilievre to lead the CPC party, suggests a new Ipsos poll conducted exclusively for Global News.

But most decent Canadians will make sure he is NEVER Prime Minister.

Despite Poilievre being the widely perceived frontrunner for leader among Conservative voters, less than one in four Canadians appear to have a positive impression of him, the poll suggests. That’s a drop of two points from July.

His grand plan to turn Canada into a fascist country is going nowhere.

And Canadians are laughing at him already... 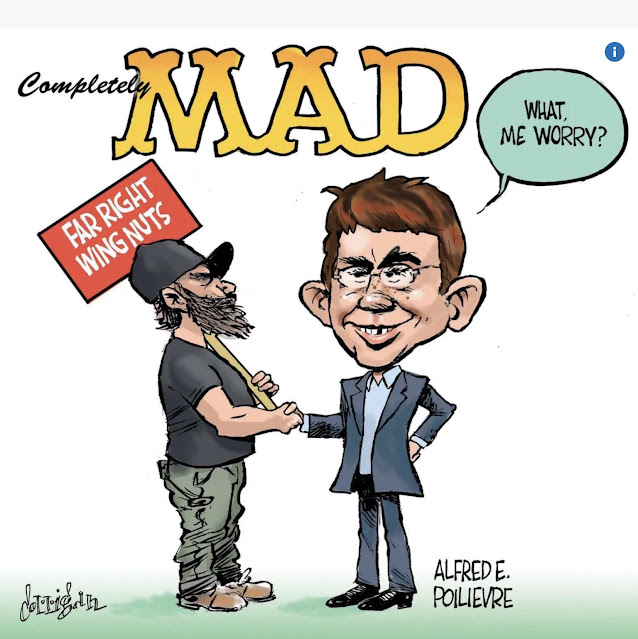 Bad news for Skippy. New poll says a whopping 70 PERCENT of Canadians have a negative view of any politician who supported the convoy. It's a bold strategy, Cotton. Let's see how it works out for him.

Bergen quit. There are multiple inquiries about to get into full swing. So much for making the convoy the PM's problem. Bye, Felicia.

Can they control him?

Hi Ottlib... Congratulations, that's the most succinct comment I have ever received. I said the same thing in my post, albeit with many more words. He can't control them because the convoy thugs now make up most of his Con base, and because he enjoys being a far-right hero so much. But I'm glad I asked the question because the far right is about to hit this country like a ton of bricks. Canadians have been sleepwalking and they are about to get a brutal awakening...

Hi Jackie….Yes, that new poll must be bouncing around in Poilievre’s head like a pinball. It now must be obvious that he has made a major miscalculation. His diseased hatred of Justin Trudeau has fatally blinded him, and it can only get worse. The problem is that as the Cons go up in flames our country could also burn. We have been far too gentle with those Con thugs, the RCMP has finally started to round some of them up, but I fear it’s too little too late. Two years of pandemic have changed this country beyond recognition, and I fear that something terrible is about to happen….

Hi John…That’s also a good question. I have spent quite a bit of my precious time researching the convoy thugs here and in the U.S. and they are even more dangerous than many people believe. I hope I’m wrong, but if I’m not we are in for a really bad time…

I won't take up a lot of your feed or time since it's board/card game night and my friends are picking me up, but here's some quick thoughts:

-The Convoy people are white supremacists and borderline terrorists. They are well-funded and defended by swaths of the media and hard-right podcasters. They are also on the ins with police forces and the RCMP. Thankfully, our higher-ups have brains and are watching everything.

-Rumours that Gerald Butts and a secret cabal are going to elect Jean Charest as head of the CPC are greatly exaggerated. Pierre Poilievre will be head of CPC, the rate going up a tick by the Bank of Canada will likely push inflation down to 5% or so by years end and it will likely be 2-3% in 2025, as planned

-P.P. can't win the next election unless there is some "Fair Elections Act" garbage going on. Only 30-33% support CPC, 30-35% support LPC and 20% support NDP. That means a minority government and if it's an LPC one, Poilievre and Harper may as well do...whatever cons do, I'm guessing a cruise of some sort since those use massive amounts of fossil fuels.

-Speaking of fossil fuels, Ottawa may be carbon-free by 2030 if Catherine McKenney gets elected. They want to electrify homes in the NCR, retrofit houses and give credits for EV to everyone. Ottawa might be safer, finally. Not sure how things are in your end of the Big Smoke/Hogtown...hopefully improving.

Shame, Shame, Shame on CONservative supporters attacking tweets of condolences from Liberal politicians over the recent tragedy in Saskatchewan.

Shame on them all.

"Can Pierre Poilievre Control His Convoy Crazies?" Hell no. PPs job IS to make them crazy and out of control. Whatever happens next by way of threats and or assassination attempts are just another opportunity for him to smirk in approval. PPs dream of turning Canada into a Trumpian shithole is just that, a dream. A dream turned nightmare when JT kicks his ass to the curb in the next election. Decent Canadians have had their fill of the far right douchebag convoy/Qanon types and will vote in droves to flush this rancid PP down the toilet at the earliest opportunity.
JD

Hi Pierre....Many of the convoy losers are indeed borderline terrorists, and the fact that they have some sympathizers in the police forces should alarm all decent Canadians. But the good news is that Poilievre is now carrying the can for those thugs, and as more people realize what he has done to this country his popularity will tank even further. I see many Cons are still fooling themselves into thinking that they are some kind of majority, when they are just a noisy minority, who will when the time comes be squashed like bugs. *Splat* The problem is that there could be lone wolf would be terrorists lurking in the shadows out there waiting for a chance to kill the Prime Minister or members of his government. Those Cons will have to be hunted like the dangerous criminals they are, for until they are behind bars no Canadians are safe...

Hi anon@4:33 PM....I am not aware that the Cons had been attacking Liberal politicians for offering condolences to those affected by the horrible tragedy in Saskatchewan. But colour me not surprised. Poilievre and his Convoy Party have debased our country beyond recognition. But if we bury them in the next general election we can get our beautiful country back...

Hi JD...I agree with you. Poilievre is guilty of so-called stochastic terrorism, which whips up hatred against people like Justin Trudeau in the hope that someone will try to kill him. And let there be no doubt there are many Cons who would love to do just that. Fortunately unlike Poilievre Trudeau is not a coward, so if the Cons think they can get him to resign they are out of luck. Judging from his demeanour at the cabinet meeting in Vancouver today, he is ready and willing to take the Cons on, and as you say kick Poilievre and his cowardly gang to the curb in the next election. Like you I also believe that most Canadians have had enough of these lowlife would be terrorists and they will give him the majority he needs to finish the job. We want our peaceful Con free country back and we are going to get it....

I'm not sure that Poilievre will be able to sustain the level of anger, hate and paranoia long enough for it to translate in to a significant amount of votes. I'm sure he will for his base (you can't reason with the unreasonable and the wilfully ignorant) butI get the sense that many who were frustrated have moved on to other issues rather than spending time being perennially pissed off. PP seems to be backing Toews for AB Premier which I don't think will happen.
Waywayup

Simon, being surrounded by Poilièvre's supporters gives me a daily indigestion, their truculence going beyond the orange clown's deeply rooted intolerance and racist eructations. This country (especially the Prairies) is on the verge of becoming so polarized that your average open minded Canadian will have to think twice before expressing himself/herself on political and God forbid religious issues. I'm however very thankful for the well-educated and very discerning minority whose stance allows her to continue to push a somewhat limited liberal agenda in Edmonton and Calgary.

Hi Way Way Up....I don't believe Poilievre will ever have the votes to win a general election. But I am concerned how his rabid base might react when that becomes apparent to them. They won't blame that on Poilievre, they'll blame it on us, and I fear they will turn violent. More on that in my next post...

Hi Sisyphus....It must be hard to be surrounded by Pierre Poilievre's ghastly Convoy Party supporters. Their conspiracy theories have me constantly shaking my head, and their naked bigotry disgusts me. I fear that they could take this country to a very bad place, but if we stand up to them we will defeat them, and save our country from their bestiality...