Stephen Harper and the House of Monkeys 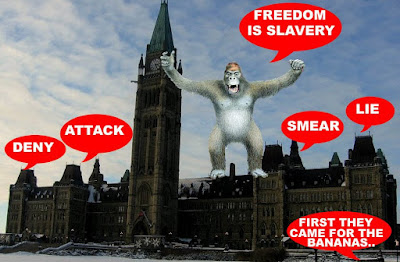 If you want to know what kind of a jungle Canada would become if Stephen Harper ever won a majority, all you have to do is look at what his ReformCons are doing to our Parliament. Acting like fascists. Debasing it. Raping its traditions. Turning it into a Monkey House.

They think if they repeat a Big Lie Canadians are so stupid they'll eventually believe it. So they lie all the time. About everything.

They never answer a question all they ever do is attack.They're out of control

Deputy speaker Royal Galipeau — a Conservative whose parliamentary position makes him responsible for keeping the peace — charged over to Liberal MP David McGuinty in the middle of question period and launched a finger-wagging tirade.

Environment Minister John Baird strode to an open microphone in the Commons foyer and delivered a teeth-baring, unsolicited four-minute tirade accusing the Liberals of being sneaky, sleazy and underhanded — and various combinations thereof.

Throw the monkeys a banana. Can you believe John Baird? 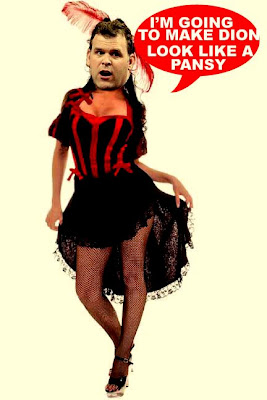 Is that ridiculous or what?

But of course that's just how Stephen Harper wants his Cons to behave. He has no respect for our Canadian democratic traditions. He wishes Canada was Amerika. And that he was President instead of Prime Minister.

That's bad enough. But when he allows his good old boys to make a mockery of Parliament on a question of human rights he's acting like a fascist.

They even have a secret guide on how to create chaos.

A secret guidebook that details how to unleash chaos while chairing parliamentary committees has been given to select Tory MPs...

How low can they go?

But surely by now most Canadians must finally realize that Great Leader has a deeply disturbing authoritarian streak. He's muzzled his caucus. He's muzzled the civil service. He's trying to turn the armed forces and the police against other Canadians. He accuses anyone who doesn't agree with him of being a traitor.

Surely by now most people must also realize that Stephen Harper isn't acting like a Canadian Prime Minister should. He's acting more like a tyrant in waiting. That this religious fanatic, with a hidden agenda to turn Canada into Amerika, isn't all THERE. Something is not quite right.

And that something in the PMO stinks like a rotten corpse.

You wonder when the tough guys in the Prime Minister's Office are going to realize that their intense partisanship, and juvenile tactics, could be hurting, rather than helping, their cause.....

You can bet more than one of Stephen Harper's ministers, and some of his brighter backbenchers, are worried, and occasionally embarrassed, by the sour vibe constantly emanating from the PMO.

They're embarrassed....we're disgusted. No fouler political formation has ever slimed our government.

But at least now we are forewarned. We have seen what these ReformCon thugs are really like. We know where Great Fascist Leader would take us.

We realize that if we don't do something about these monkeys. And do it quickly.

We're going to end up like the ferrets of New York City.....

I say we cage the fascist apes.

And release them somewhere faraway in Alberta or the United States.

Before it's too late.

so baird hit the open mic and spoke kareoke while foaming like a rabid animal? ew, yuck, the image of him doing this makes me creeped out.

"Frat house antics" hahahaha, so true. These guys are such a bunch of amateurs.

Conservative politics does the recipe of fear well. They like to create as many enemies as possible that only they can save the god fearing populace from. This is why, I think, that conservative politics and religion go hand in hand. They both claim to be the only ones capable of saving people from the "evil" of this world and the next.

That they do their damn best to create that "evil" and the fear in the first place, barely gets a mention.

Hi anonymous....look Trudeau was arrogant...and he did act like a fascist during the War Measures Act.
But even you have to admit that Harper is a control freak. And one day you'll realize that what he is doing isn't good for the CP in the long run...

Hi Scoutie!! Yeah...I just don't know about John Baird. It's like he's stuck in some time warp from when he was on the Young Conservatives debating team. It's juvenile stuff...he really needs to calm down...or get laid :)

Hi JJ!!...yeah I don't really understand them. They could have had a majority so easily this summer if they acted more like a centre-right party....instead of a far right one.It was there for them to pick off a tree like a ripe fig. But they blew it,Harper is warping the Cons and they won't realize it until it's too late. Lucky for us they're dum :)