The Pope's Shameful Visit to Spain 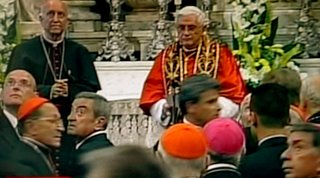 I see the (former) Nazi Pope has ended a quickie visit to Spain, where he spent his time pining for the good old days and attacking that country's liberal and secular values. In the usual way: by attacking gay families.

Too bad for him not too many Spaniards seemed to be paying attention. They had to fly in the faithful from all over the world to make it look like he could attract a crowd. I mean checkout the photograph. Even his entourage looked bored.

But the part I liked best was the slap in the face he got from Spain's Prime Minister Jose Luis Rodriguez Zapatero. Good for him. I only wish we had a Prime Minister who could stand up for our secular values like that

But then Zapatero has a lot of history going for him. The long dark years of the Franco regime when the fascists and the Catholic Church ruled the country with a bloody hand. And millions were killed, or jailed and tortured, or driven into exile. And contraception, divorce, abortion, and homosexuality were outlawed. The fearful times that the old inquisitor Benedict calls the good old days.

So many victims. So much blood and suffering. But for me the horror of those years hit home when I visited a ravine near Spain's Sierra Nevada mountains where the fascists murdered Federico Garcia Lorca 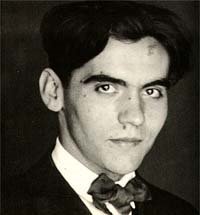 They shot him once for being a left-wing poet and playwright who frequently criticized the Catholic Church. And then shot him twice in the ass for being a "maricon" or queer.

In the months and weeks before his death Garcia Lorca was tormented by a recurring deathly dream. Dark veiled women would threaten him with black crucifixes. He was wrong about the women. But his killers, who were never punished, wore black shirts. And had crosses dangling from their necks.

His young lover Rafael Rodriguez Rapun, for whom Lorca wrote these sonnets, died fighting for the doomed Republic one year to the day later. When fascist planes strafed his position and he refused to take cover. Just stood there and fired away.

At least Rafael has his own grave. Federico doesn't

Not that it really matters. Although it would be nice to reunite them again. But it's a beautiful place. He's in good company. And his spirit lives in the hearts of the Spanish people who treasure him. Who have come out of the darkness and into the light. And don't want to go back to the so-called good old days.

How this Pope fails to understand that is almost beyond belief. How he could call for a return to those evil bloody times is simply unforgivable.A shameful and disgusting thing.

But then the Catholic Church has declared war on liberal democracies everywhere, including Canada. So we shouldn't be surprised. We should just be prepared to fight back. And never let those religious fanatics tell us how to live our lives. Or try to silence us.

As Garcia Lorca once wrote:

"To keep still when we are on fire.
Is the worst punishment we can inflict on ourselves."

I think that message was directed at oppressed gays and lesbians. But it applies to everyone else as well.

Gays and lesbians may burn first. But if these crazy religious fanatics have their way we'll all burn later.

As I sat in the shade of a few olive trees, on a brutally hot day, and thought of the gentle,dreamy, gay poet and playwright who was killed for what he wrote and who he was....and all the other victims of fascism.... I felt dizzy.

Maybe it was the heat or the horror. Or maybe it was because it was all so blindingly clear.

Either we destroy the religious extremists who are torching the planet in the name of their crazy gods.

I really enjoyed your post. Very good was of making a needed point.

You have to ask how much of this Popes ideology is being driven by an understanding of Christian belief and how much was formed by his exposure and participation in the Nazi era education system. Judging by his movement he is also somewhat effeminate so we have to only wonder about his sexual orientation? I imagine it would be pretty psychologically damaging to be an adolescent and to become aware that one has a homosexual in Nazi Germany ? I don't hold he is a Nazi but I do suspect his reality is clouded by his past.

The level he seems to work at regarding homosexuality is one of despise which reeks more of personal issues that religious beliefs. Labelling a group of human beings as ‘evil’, ‘and disordered’ I would not have thought that these are the words of a Christian man, even if you considered certain behaviour sin fall. This determined negative attitude towards gays does seem more a kin to Nazi ideals and some personal psychological pathology than to Christian values.

He is not a great leader and he made a complete mess of his recent visit to Poland. A disgrace. The few faithful that continue to follow are of course brain washed from an early age to only see anyone in a Papal dress as superior and profound - even if the reality is the reverse. The problem for the Pope is that humanity is becoming more educated and wise to tricks of using fear and “magic”.

All Popes dislike gays, not just the
Nazi ones, anyway no-one listens to them anyway.

J.F.K. "We are opposed around the world by a monolithic ruthless conspiracy."
- President John F. Kennedy
http://www.youtube.com/watch?v=LlEqtaWpKEU

You wont get Benedict XVI saying much about Garcia Lorca or H.G.Wells. He prefers big words rather than those of the people: big words like Opus Dei and General Franco.

Unfortunately , all those young men of the Spanish Brigades and all those millions of Russians who liberated us from the fascisti -- all their efforts have been constantly undermined since WW11 -- undermined by Vatican/Anglo-American combines.

What a pity! Freedom may have to be won back yet again from the Whore of Babbylon!