I have to apologize for slacking off again. But when it comes to a choice between blogging and summer I'm afraid blogging doesn't stand a chance. Besides what can I blog about? It's too hot to get angry. I'm determined to try to set an example and stay cool. While others are losing their minds. Cooking their radiators over a pissing match.

The whole thing is absurd. All it proves is that young, boozed up Conservative louts have no class. And that some Conservative bloggers are crazy and possibly dangerous But we already knew that.

Besides if the unknown soldier had been able to sit up in his tomb and watch the drunken oafs do their thing he probably would have laughed it off. He was probably young too. And he would know that his memory and those of all the others are safe in our hearts. Stones can be worn down by time. Or even pissed on. But what's in our hearts can't be touched. It's the stuff that makes us Canada.

So please can we get a grip on ourselves? By all means embarrass the shit out of those drunken idiots and charge them with mischief. But I suggest we let them live. Stop making them public enemy number one. It's too damm hot for a lynch mob. The Harper bubbas may be in power. But we're still not Alabama.

It's even too hot to get excited about the mad ravings of these African bigots. In fact I'm delighted.The way ahead is now clear. If unity means bigotry. Then long live separation! It's time for the American Anglicans to remove the cancer growing on them. And sever all links with the African Church.

Any Church that encourages the persecution of gays and women while allowing polygamy and ignoring genital mutilation should be worshipping Satan instead of Christ. The American Church is better than that. Much better.

Which reminds me of something I really wanted to blog about. The big fireworks show that capped the big party down South. 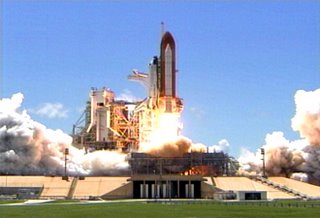 Talk about firing off a big bottle rocket to celebrate the Fourth of July!!

It takes a lot of faith in the future, imagination, know how, and above all guts to fly this baby these days. But our neighbours still have lots of that.

I spend a lot of time attacking the dreadful Bush regime. I hate those bastards with a passion. But I love the American people. My granddad made sure of that.

By a fluke of history he was rejected by the RAF in the last year of the war because he was too young. But they sent him off to Canada to learn how to fly. And then on to the United States to fly Corsairs with the U.S. Navy.

My grandad's views of the United States were shaped by the men he flew with, and by the sunny optimism of post-war America. It was like he was trapped in that era. Almost fifty years later, on a rare visit to the States, he dragged me all over the country looking for a drugstore that still sold malt sodas.

And he never lost faith in America the beautiful. The yankees might lose their way sometimes he said. But never their idealism and their freedom loving hearts. For every bad thing I could come up with, he could mention something good from the field of medicine or science. Remind me the country of Richard Nixon was also the country of Abraham Lincoln.

Besides he used to say, compared to the stuffy English they're an awful lot of fun.

He was right about that one. They really do put on quite a show. And we've got the best seats on the planet. You've got to love the fact that history made us neighbours. I mean who would we rather have next door? Snooty France?

Hey the yanks can sometimes drive us crazy. But sometimes, like this afternoon when the shuttle Discovery soared into the sky carrying among others the first black woman to fly into space, they can also inspire us.

Now excuse me while I go back to my summer....